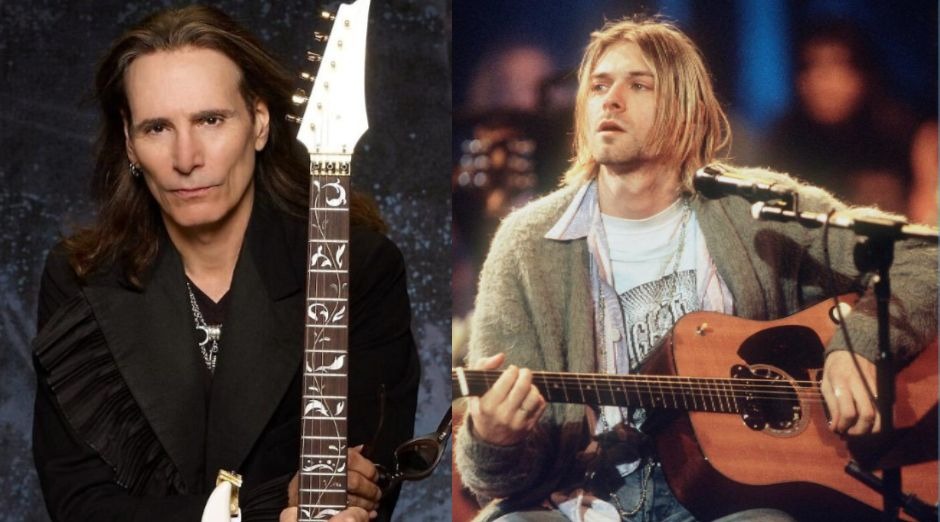 Virtuoso guitarist Steve Vai talked about Kurt Cobain‘s skills as a guitarist in an special live stream with fans on Facebook and compared with with Billy Joe Armstrong from Green Day.

Steve Vai was asked: I was discussing with a friend recently, the specific case of Kurt Cobain’s playing. There are a lot of players at his level of technical proficiency, but there is only one Kurt Cobain. Was there something engrained in Kurt that set him, and others like him, apart from other players at his level, and makes his music more impactful?

“Yes. Their intention. When the intention is strong, nothing will stop them. Kurt Cobain is a good example of that. He just did the music he wanted to do. That’s what my take is on it.

“When I hear him and I hear that band, I don’t know how much music theory or anything like that he knew. But he was able to develop enough technique to get his point across. He didn’t have a virtuoso technique. But he didn’t need it.

“You’ve got to keep in mind that his style of playing. Those chords and the way he would arpeggione chords and then go into that blasting kind of thing. All the years I spent practicing scales and virtuoso type riffs. He was locking onto these chords in a very connected way. I see that with guys like [Green Day singer/guitarist] Billie Joe Armstrong too.

“When you see that guy strumming chords, it’s virtuosic in a sense because it sounds like an orchestra when he slams that guitar. Every string has its own zip code, you know what I mean? Kurt was like that too.

“A lot of people might not look at him as a virtuoso. But he had a connection with the thing he was doing. He found his comfort zone with his technique. Everyone is doing that.

“Everybody needs some kind of technique and they will naturally gravitate to the thing that is most appropriate for them. If they don’t get too confused with what everyone in the outside world is telling them. They’ve got to trust their instincts.”

Music theory, for a lot of people, is something that allows them to keep their learning curve steep. Where was the steepest learning curve in your career?

“Well, as you notice when you look back on your own career, everything has its place, everything had a vital contribution to whatever came after it.

“For instance, in high school, I was having a blast playing in rock bands and playing out in these dingy rock clubs on Long Island. Playing KISS and Led Zeppelin and Aerosmith. So that was one particular lifetime.

“Then Berklee [College of Music] was another lifetime where we were exploring all these great, complex, in-depth, things. And that had its challenges, but it was great fun.

“It wasn’t that things were brick walls. They were kind of like these big walls with a hole in them. Something like polyrhythms.

“A lot of people would look at polyrhythms and just go, ‘Oh my god, I don’t want to know anything about that. That’s too complicated.’

“But for me, I had a real deep interest because I saw a potential for what polyrhythms could do to the sound of a melody. So it wasn’t something that was hard to do, it was challenging but it was delicious, you know what I mean?”

Was there ever anything that was difficult that you didn’t enjoy doing?

“Yeah, I have sort of a split musical personality. Part of me has rock ‘n’ roll in my blood and I really love the energy of being an arena performer. In the ’80s, when I was touring with David [Lee] Roth and Whitesnake and even Frank [Zappa], there were huge gigs.

“With Roth and Whitesnake, it was an opportunity to play the rockstar card. It was great fun but there was this type of music in the back of my head that wouldn’t let go. And it was there since… as long as I can remember. It wasn’t a particular song or anything, it was just a perspective on music creation.

“There were certain chord structures and melodies that my ear was attracted to that just didn’t resonate in those rock bands. I knew that it had to come out. So that’s when I did [1990’s] ‘Passion & Warfare.’

“From then on, I realized that I had a particular musical voice and I know how to express it. From plugging in the guitar to miking the cabinets to recording the drums and bass. And constructing the music. It’s the hook, line, and sinker. That vision is like a plaything. I entertain myself with it.

“It’s kind of autonomous too, in that when I try to bring someone else into it to try to get the best out of me, there’s always a dilution – the vision gets diluted somehow and it starts to lack little delicacies that I put in the music that lights me up.

“I might be one of the only ones that hear them but they’re important. So that’s why I choose to work alone. I’ve gotten offers to play with various other rock bands and, occasionally, I’ll contribute because I still do like that energy.

“But I usually don’t go out on tour unless it’s with a group of guys who are really doing something interesting – like when I played with Zappa Plays Zappa or the Experience Hendrix Tour or something like that.

“I recently got an offer from somebody. I don’t want to mention who. But this other guitar player offered for me to go out on tour with a couple of other guys. And do the music from his band, and I love that band. And if that works out, that would be a situation where I feel it would be cool to go out with some other guys.

“But really, you have to get the right guys and they have to have the right intention. I have no desire to go out and relive the glory days of a rockstar. And I did that, I’m grateful for it. I appreciated it, but I’m much more comfortable doing what I’m doing.”