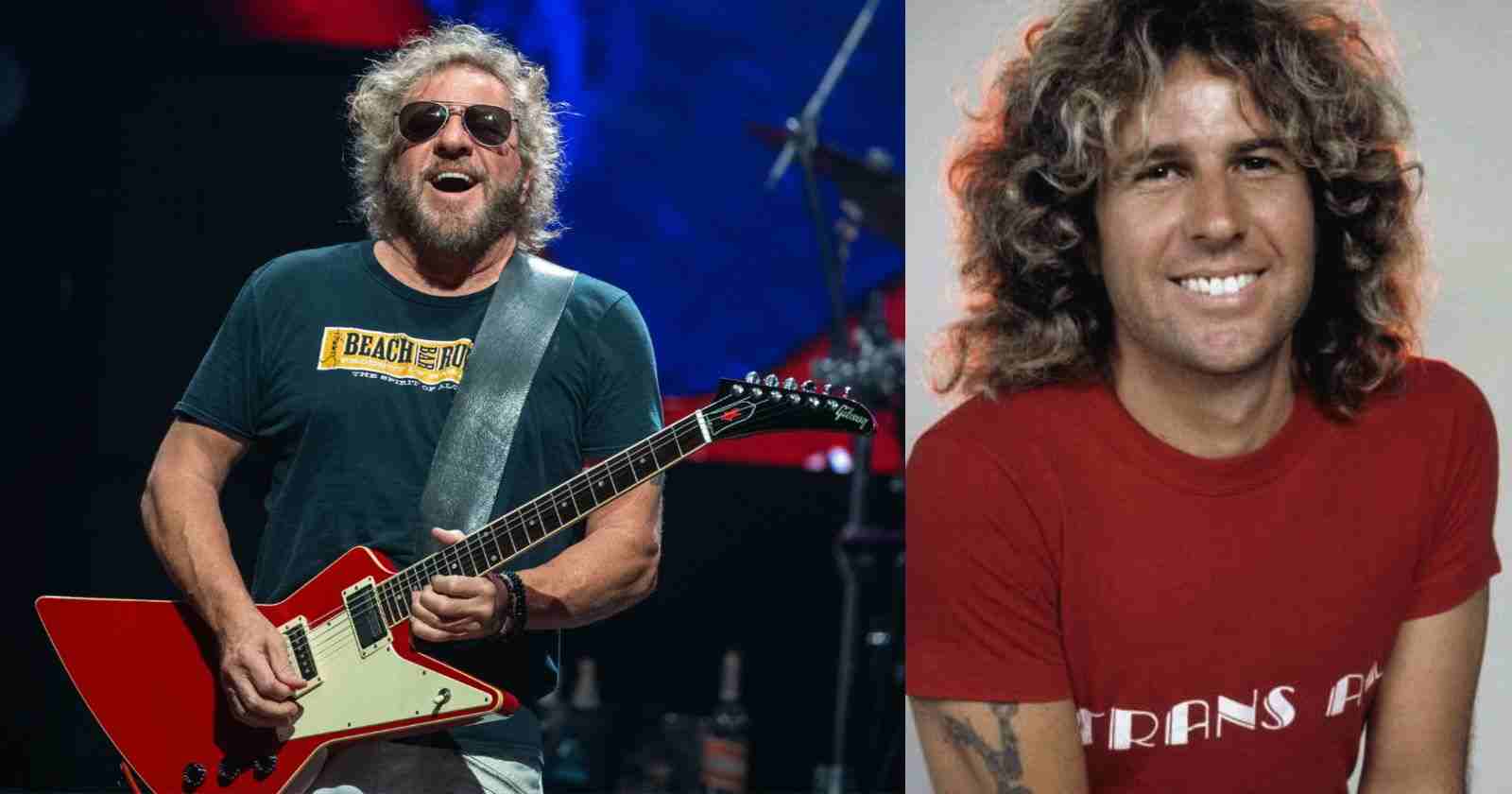 Singer Sammy Hagar (Van Halen, Montrose) is known for his powerful voice and was an influence to many musicians all over the world. In an interview with Classic Rock magazine back in 2015, the musician elected the 10 albums that changed his life, also explaining why the inspired him so much.

Sammy Hagar and the 10 albums that changed his life:

“When I heard his voice, I was knocked out. I just love the way Little Richard sings. What’s funny is, this is pretty much the only record he ever made. A lot of his other records had the same songs on them, with a couple of new tracks here and there. They were like different versions of greatest hits.”

“Here’s Little Richard is where the whole thing started. It’s chock full of great songs, and even as young as I was when I first heard it, I said, ‘Fuck man, this is the shit!’ I think I probably dug it out of my sister’s record collection. It was one of those moments when you put something on and you just go nuts. There’s never been anything like Little Richard.”

“This was the next record that really had a profound impact on me. Because I had older sisters, I heard what they were listening to – Little Richard, Chuck Berry, Elvis. They were kind of the one era, and that led into the Stones. After hearing them, I started playing the guitar and singing these songs.

“I saw the Rolling Stones’ first appearance in America, at the Swing Auditorium in San Bernardino. I didn’t have any money to get in, but I was hanging outside the venue, just to try to get a look at them. The band pulled up in a school bus, they got out with a bunch of radio people, and I thought, ‘Wow, the Stones are short. They’re my size!’ I snuck up to them and walked right in the place with them. My buddy and I were dressed just like them, because we were total Stones freaks. People thought we were with the band’s entourage. We saw the whole show.”

“I wasn’t in a band yet, but me and this other guy were kind of working on playing songs together. I heard Donovan and thought, ‘Yeah, man, I wanna be like that.’ As a young singer and songwriter, I was really inspired by him, even more than Dylan, whom I do love, too. But Donovan seemed magical, whereas Dylan was edgy, so there was a clear difference to me.”

“I heard Catch the Wind on the radio and went out and bought the album [What’s Bin Did and What’s Bin Hid, 1965], but the record that had the biggest influence on me was Sunshine Superman. That’s when he brought everything together and went electric, just like Dylan. I said, ‘OK, I can do that.’ On my first two solo albums, I did Donovan songs.”

“So I thought he was so cool and elegant. I went to see him at a club called the Trip when I was 15, and he came out with an acoustic guitar, all dressed in velvet from head to toe. He looked like an angel. Then he did the second set with his band, and he played a Strat through a Fender amp. I freaked out. I wanted to be that guy.”

“After Donovan, Cream were the next big influence on me. I loved Fresh Cream. But Disraeli Gears was the album that really got me into digging into Eric Clapton. I wore it out, I played it over and over learning those guitar solos, and let me tell you, every solo on the record is spellbinding.”

Sunshine of Your Love is a desert island classic. I go back to that song again and again and again. Outside Woman Blues, Strange Brew, We’re Going Wrong – oh, fuck, what amazing songs! And SWLABR – holy shit, how good is that? Between those psychedelic-ass lyrics and those mind-bending solos, that’s a trip.”

“All of a sudden, I got into Van Morrison. I was totally into the rock thing, but the mystical singer-songwriter vibe was very appealing to me. I considered being that kind of artist. Moondance was a big album for me when I was really learning how to write, sing and play guitar.”

“And It Stoned Me, Moondance, Caravan – what beautiful songs. Into the Mystic is probably my favourite track on the record. That one sets a mood that just holds you. Gorgeous, timeless music.”

“This was the peak of both the Beatles’ and my own psychedelic eras. We kind of peaked together. I used to sit up all night and into the morning with some of my buddies, doing acid and listening to Sgt. Pepper. I mean, the record itself took you on a trip – you didn’t need anything else to get you there. Without a doubt, it’s the all-time greatest psychedelic record ever made.”

“The musical arrangements, the sounds, the way the album unfolds – as great as the Beatles were, this was such a departure for them and a giant step into the future. You’ve got to give a lot of credit to George Martin, too. The Beatles wrote the songs, but he arranged the fuck out of them. He knew how to interpret their ideas and enhance them with orchestration. Genius work.”

“I look at the Beatles and the Stones as coming out at the same time. Same with Bob Dylan and Donovan, and Jeff Beck and Led Zeppelin. Music is kind of like that: There’s always a white-light band and a dark, edgy band.

“This is almost like a Jeff Beck and Rod Stewart album. When I heard the Truth album, I tried to be Rod Stewart and Jeff Beck at the same time. I learned every song on it. I knew Beck from the Yardbirds, and I was a big fan, so I was primed to hear him doing his own thing. This record totally blew my mind and changed my life.”

“I was a big Jimmy Page fan, as well, I loved him in the Yardbirds. But Zeppelin took it to a new level. I sort of combined my whole trip with these records that were coming out. I wanted to sing like Rod Stewart, and I wanted to play guitar like Jeff Beck and Jimmy Page. And Eric Clapton, too – him most of all. I wanted to put them all together in my own music.”

“Good Times Bad Times was the first song I heard from Zeppelin, and I knew I had to go and get the whole record. My whole band and I were sleeping in one room on a hardwood floor. We had a little bullshit record player, and that’s how I first heard the album. And even on that no-fidelity record player, it still sounded great. I was like, ‘How can I get that guitar sound?’ Man, it was so heavy,” Sammy Hagar said.

“I listened to this record religiously, and I wanted to be this kind of artist. I wanted to have mystique. Peter Gabriel, too. Between him and Pink Floyd, I thought, ‘If I can just make that kind of music…’ But it wasn’t me. I’m more about jumping all over the stage, singing and playing as fast as I can. I’m not dark.”

“Still, I love what Pink Floyd did. This is one of their best records. David Gilmour’s guitar playing is incredible. His sound and style, the way he gets all vibey – it really works for me. Pink Floyd were deep. They took you to new places,” Sammy Hagar said.

“This was a very important record for me. When I left Montrose, my first band was called Sammy Wild and the Dust Cloud. I had the fictitious name and everything. I put together a space-age, psychedelic science-fiction show. There was no production – all I had was one of those fucking star machines – but I went for it.”

“I got signed and the record company said, ‘No, you’re Sammy Hagar.’ So I said, ‘OK,’ and I went with that. If they would have said, ‘You’re Joe Blow,’ I would have said, ‘No problem.’ But I was into the David Bowie thing, the whole glam period.”

“Ronnie Montrose came to see me when I was in a soul band called the Justice Brothers, and I had glitter all over my face, lipstick, eye makeup, nail polish, the whole bit. I was wearing satin pants and jewellery, high-heeled shoes – not like a cross-dresser, but a glam rocker. That’s what I was. I was into it big-time.”

“Bowie had a huge influence on me. If you listen to my first solo albums, each one has a science-fiction song. First one was Silver Lights, and then there was Little Star/Eclipse. Then I did Crack in the World, which was my Pink Floyd rip-off. I was always writing about the future, like Bowie did. I wanted to do a concept record so bad, but I never got around to doing it,” Sammy Hagar said.