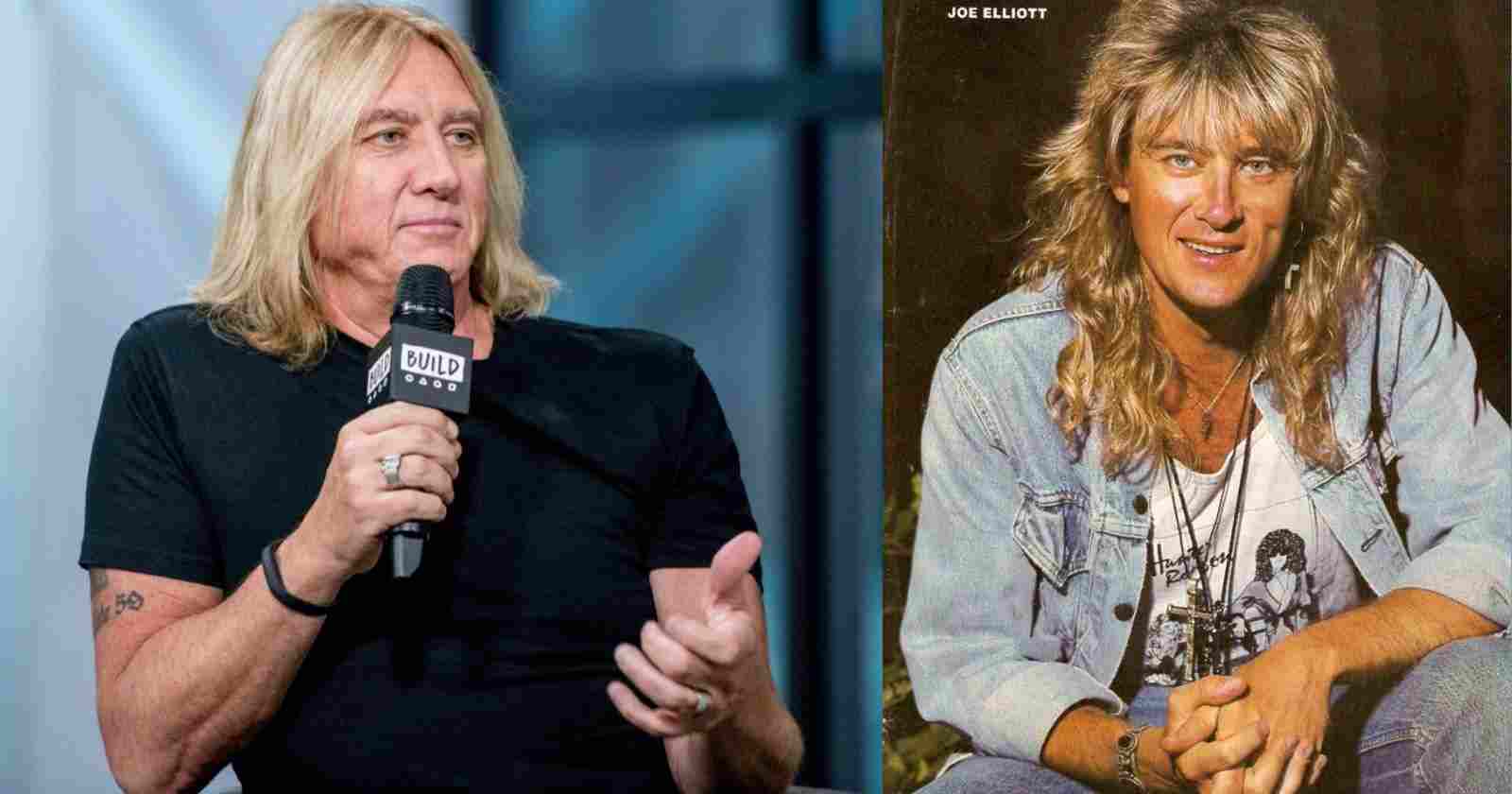 Def Leppard singer Joe Elliott have many influences but revealed in an interview with Classic Rock back in 2019 the 10 albums that changed his life. The musician declared his love for Mott The Hoople, David Bowie and more.

Def Leppard’s Joe Elliott and the 10 albums that changed his life:

“This actually came about via a compilation called El Pea. It was a double record put out by Island records that had 24 tracks by 24 of their artists. Island Records in those days was phenomenal: Mott the Hoople. Free. Cat Stevens. Jethro Tull. Spooky Tooth. Jimmy Cliff. A crazy, brilliant, eclectic collection of people. And that’s where I originally heard this song called Original Mixed Up Kid by Mott the Hoople. That was my big intro into Mott, alongside Radio Luxembourg.”

“But I don’t want to go with a compilation record, so I’ll choose the record it came from, which is called Wildlife. It was a Mott the Hoople studio album and it was very mild. There were many rockers on it, but it was different from their first, and from everything that came afterwards,” Joe Elliott said.

“When I was 10, my friend Nigel — who lived down the road from me — was 14. He liked King Crimson and Jethro Tull and proggy rock like uriah Heep. I used to go round to his house and listen to his records, and whenever Aqualung came on something resonated with me.”

“You start with the title track and its brilliant riff, all the way through to nearly the end with Locomotive Breath, and there’s so much great stuff in between. There’s so many great tunes: Mother Goose; Cross-Eyed Mary. It’s such a great album, and I still play it a lot these days.”

“The first album I ever bought from a shop, for two shillings and 11 pence. Maggie May probably prompted me, because it was on Top of the Pops in 1971. I loved his voice, went on to be a huge fan of the Faces, and then backtracked to hear a lot of older Rod Stewart stuff like An Old Raincoat Won’t Ever Let You Down.”

“I love that gravely rip in his throat, and the ease with which he sang. He was like a hybrid of British soul and rock. It was a 40-minute journey of all sorts of emotions.”

“1972. Top of the Pops. Starman. So I went off and brought Ziggy Stardust. A life-changing record, no doubt. As much as Bowie would hate this, it was the embryonic beginnings of glam rock as we know it, even more so than Bolan. Bolan had it, but Bowie took it to another level, because by the time we got to 1973 Bolan had kind of shot his boat.”

“Bowie really only did his glam rock thing by magpieing off other people – just three years later he was a soul boy. But Ziggy Stardust was as much to do with the band: the solo on Moonage Daydream; the rhythm section. Some of those songs were absolutely mind-blowing. A brilliant, stunning record.”

“Bowie had rescued Mott from the doldrums by giving them All The Young Dudes, which is like giving away the crown jewels, but in fairness Mott’s version is a million times better than any version Bowie did, right up until the Reality tour: the version recorded at The Point Depot in Dublin in 2003 is pretty damn good. But with every other version, he never quite nailed it.”

“Mott killed it, but after that it was, “what now?” And fair play to them, they went into the studio without Bowie a year later, recorded Mott, and pulled some absolute gems out: All The Way From Memphis, Honaloochie Boogiebut, Ballad Of Mott The Hoople, Hymn For The Dudes, Drivin’ Sister… and Violence! Christ, what a song! They actually had a fist fight! It showed Ian Hunter’s amazing songwriting process: he was always a great songwriter, but it really came to the fore on that record,” Joe Elliott said.

“I can’t remember how I discovered this. I can’t remember where I heard it, or the shop I bought it from. In those days you bought records because you thought the cover was cool, and hoped that the music matched the sleeve. Even to this day it sounds like it could have been made last week. Ted Templeman did amazing job — it’s the reason Van Halen got him.”

“Ronnie Montrose was an incredible guitar player, and Sammy Hagar — even to this day — is a stunning vocalist. And the thought that Ronnie Montrose and Bill Church (the bass player) actually played with Van Morrison [on Tupelo Honey and Saint Dominic’s Preview] beggars belief. Denny Carmassi’s drumming was right up there with Bonham.”

“The negativity around the band was probably the only thing that stopped them from going places, and because people thought they were poor man’s Zeppelin. The album was very reminiscent of Zeppelin, but its production was bigger. It’s just a really good slice of American rock, but it sounds very British.”

“This is where I came in with Queen — somehow I missed the first two albums. Our bass player always looks at me like I’ve got three heads when I say, “no, I never saw Seven Seas Of Rhye on Top of the Pops. I must have been out playing football that particular week. But when I first heard Killer Queen I thought, “wow, this is different!”

“You could tell they were rock band, but you could also tell they were much more than a rock band. It had elements of vaudeville, which is fantastic to be able to bring on board, and when I heard the album there was even more things, like Bring Back That Leroy Brown, but at the same time you had things like Brighton Rock hammering away but with Freddie Mercury sing away in this weird falsetto that sounded like Sparks.”

“It’s an amazing record. Now I’m Here is still one of the best rock songs ever written. It was very varied, very Queen in the sense of setting a standard that they then had to follow. It wasn’t like an AC/DC record where you get 10 songs that are very similar. This could have been four different bands on one record, with four different personalities making the music,” Joe Elliott said.

“The Spiders had been jettisoned from Bowie’s life, and Mick Ronson got together in Mott the Hoople with Ian Hunter. After a shambolic period both left (two of the guys carried on under the name of Mott) and Ian put out of solo record with Ronson playing all the parts.”

“To this day it’s still one of the best records I’ve ever heard, production-wise, done in a month in 1975. It’s amazing: there’s some stunning songs like Once Bitten, Twice Shy. The dynamics of that song, the way it builds from the first verse up until the second verse, when the guitars kick in, and the great chorus, then a fantastic guitar solo by Mick Ronson.”

“One of the best things Mick ever played in his life is the solo in The Truth, The Whole Truth, Nuthin’ But The Truth. It’s absolutely stunning, but it’s also a great song, and there’s not a bad song on the record. I was 15 when it came out. I saw one show on that tour at City Hall in Sheffield, and it just totally cemented the relationship with me. An incredible record.”

“Mick Ronson’s second solo album. He didn’t write much of the material. He did lot of covers. It was almost a desperate attempt to make a record — he was pulling out tracks he’d done with Bowie on the Pin Ups record that Bowie never used, like White Light White Heat — but there are some songs that Mick put together that are absolutely to-die-for.”

“There’s a song called Empty Bed which is a stunning acoustic string ballad. There’s a track called This Is For You that I’ve covered (yet to be officially released!), which was written by a guy called Laurie Heath, who used to be in The New Seekers.”

“The opening track of the album is the song called Billy Porter which Mick wrote, which is almost a French chanteuse kind of thing. That’s followed by an amazing song called Angel No. 9, which is written by Craig Fuller from Pure Prairie League, but Mick’s version — just for the guitar playing alone — is absolutely to-die-for.”

“It’s a great album. It wasn’t a big seller, and I’m probably in a club with about 25 people who give a shit, but it’s fantastic!” Joe Elliott said.

“I wanted to pick the Pistols or the first Clash record, because they did mean a lot to me, but I’ve had to go with Obsession by UFO, because they were such a huge influence. Def Leppard were on a boating holiday on the Norfolk Broads, and we happened to read a local paper which said that UFO were playing the Ipswich Gaumont, which was a taxi and a bus ride away from where we were parking the boat.”

“We’d yet to play a gig when we saw UFO, and they opened up with three brand new songs, which was very brave: Hot And Ready, Cherry, and (I think) Only You Can Rock Me. And then they went on to do more familiar material, and we were just gobsmacked. The dynamic on stage between Pete Way’s lunacy and Phil Mogg’s attention-grabbing stance in the middle, and then the mad German on the right with his bucket boots and Flying V.”

“It was insanely brilliant. Steve Clarke turned around to me and said, “Right. That’s it. I’m leaving if we don’t start playing shows.” Because all we’d done was rehearse for nine months to try and become relatively good at what we did. That show — and that album — were a massive influence on us, because we were listening to the album all the way through the boating holiday.”

“UFO were and still remain a major influence on us for all sorts of reasons. They were very British, and they had a sense of humour So with the greatest of respect to Never Mind The Bollocks and the first Clash album, I’m going with that one,” Joe Elliott said.