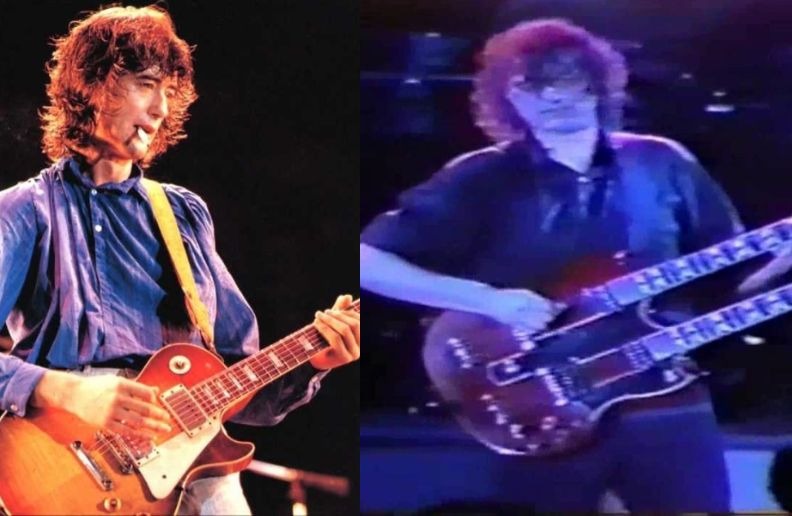 In addition to co-founder of the XYZ short-lived supergroup, he composed the soundtrack of Death Wish II (1982), released The Firm with Paul Rodgers, reunited with Led Zeppelin and played with big names from Roy Harper to the Rolling Stones.

At the end of the decade, Page managed to set aside time to record the first solo album, Outrider (1988), the only self-produced album that is not a soundtrack released to date.

Rolling Stone, at the time, gave two stars to the album and nicknamed it “a whole lotta muddle”. David Fricke, the reviewer, made a reference to Led Zeppelin’s “Whole Lotta Love.”

A few months after the album’s release in June 1988, Page began an extensive tour on the United States, followed by several shows in the United Kingdom.

In his performances during the mid-1980s, with The Firm, Page avoided Zeppelin’s repertoire almost entirely, but this time he was in a more nostalgic mood.

The set-list of Outrider’s tour – where he was joined by drummer Jason Bonham, bassist Durban Laverde and keyboardist / singer John Miles, who also recorded the album – was a tale of his career to date, including songs by The Firm, Yardbirds and Led Zeppelin, plus the new originals.

At the end of the shows, he drove fans crazy by playing an instrumental version of “Stairway to Heaven,” which he debuted at the A.R.M.S charity show in 1983.

Watch the full version of the song recorded during a show in Arizona in 1988:

Fans clap and light lighters when Page enters the introduction of the song on his six-stringed, two-armed guitar. He then switches to a 12-string guitar and starts playing the verse, with the other instruments joining him a few minutes later, reproducing the original arrangement.

When the chord sequence of the bridge arrives, Page becomes a rock god and lifts the guitar vertically, smiling and delivering the full drama of the song.

The epic solo, accompanied by the drums of Bonham’s two bass pedals, shows that Page did not lose his style during the eight years that have passed since the last Led Zeppelin show.

At the end of the song, he invites the audience to sing along with him, punctuating the chords with punches in the air.

“People will see on the show that I’m not avoiding Zeppelin,” Jimmy Page told the Los Angeles Times before the Outrider tour. “That’s part of my heritage. I’m proud of that.”