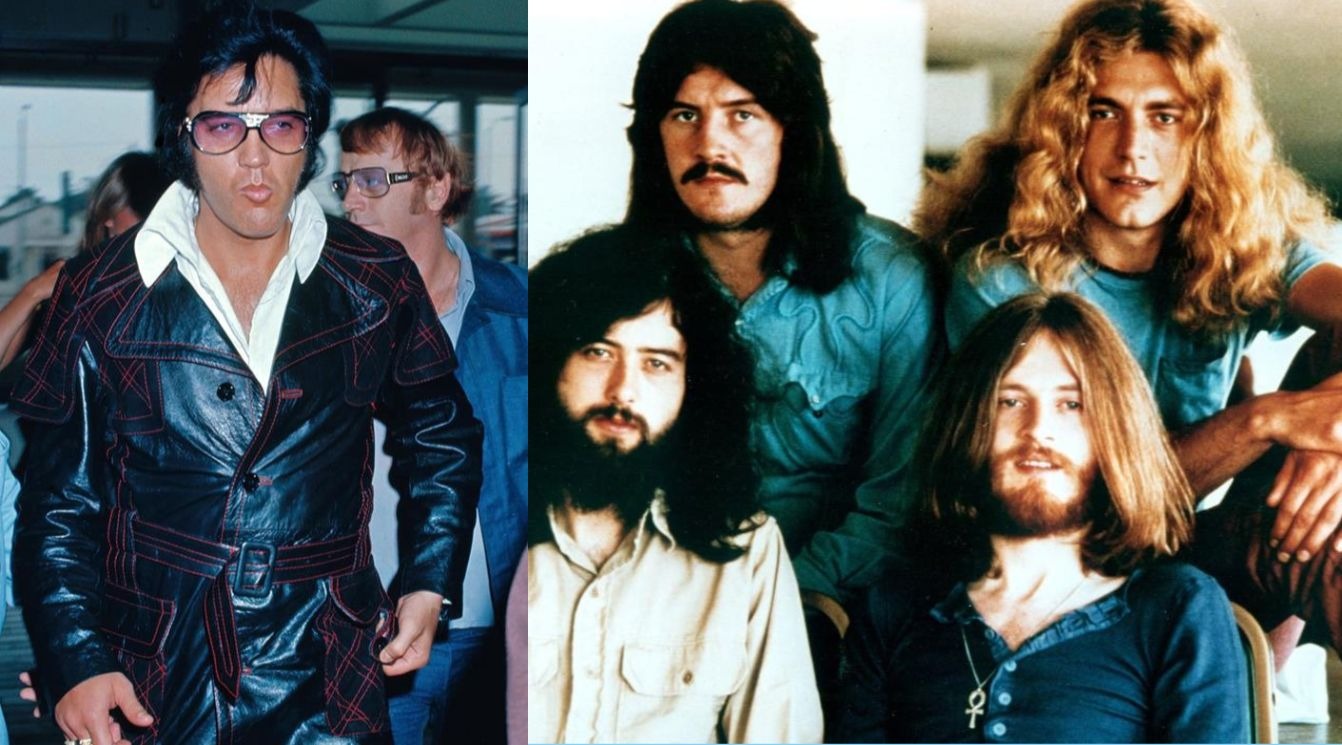 Robert Plant, Jimmy Page and John Bonham were in Los Angeles, ostensibly for the release of Swan Song. The night after the launch party at the Bel Air Hotel, bassist John Paul Jones decided to attend Elvis Presley’s concert at the Forum.

At some point, Elvis seems to have been alerted to the presence of the rock group in the audience, because at one point in the show – which was recorded and later released as “Live in L.A.” – you can hear him saying to his band: “Wait a minute. … If we can start together, fellas, because we’ve got Led Zeppelin out there. … Let’s try to look like we know what we’re doing, whether we do or not.”

Hear the moment below:

Led Zeppelin and the king of rock had the same promoter, Jerry Weintraub, who marked the meeting after the concert between the parties. Robert Plant later wrote his impressions about Presley: “Zeppelin met Elvis after one of his shows in the 1970s.” I praised him, he was not as tall as I. He had a singer’s body. He had a good chest — that resonator. And he was driven.”

Plant also revealed something funny at the end of the night. “At this meeting, Jimmy Page joked with Elvis saying we never checked the sound – but if we did that, all I wanted to do was sing the Presley songs,” he said.

“Elvis found that funny and asked me about what songs I sang. I told him I liked a lot, like the great country music ‘Love Me’ – ‘Treat me like a fool / Treat me mean and cruel / But love me’

So when we were leaving, after 90 minutes of light and fun with the guy, I was walking down the hall. He caught our attention behind the door frame, looking quite pleased with himself, and began to sing that song: ‘Treat me like a fool …’. I turned back to Elvis and stood there, singing together.

The Elvis Presley and Led Zeppelin paths would intersect two more times over the course of the 1970s. The next meeting took place at Elvis’s Memphis home, which Jerry Schilling, a noted member of the Memphis Mafia, wrote in his book called ” Me and a guy named Elvis. ” After exchanging jewels with each other, the king thought it might be fun to do something different.

“Before the evening was over, Elvis said he’d like to make another trade.” Then he stood up, looked at John Bonham, and said, ‘Let’s change pants’ while at the same time letting his pajama pants fall under his robe.

Richard Cole, the tour manager for Led Zeppelin, was shocked and silent as Sheila and John burst into laughter. No one accepted Elvis’s offer, but it was a great way to end the night,” Schilling recalled.

The final encounter between Zeppelin and Elvis Presley was at Baltimore’s airport when they were touring in 1977. David Stanley, Elvis’s half-brother, recalled the meeting later. “There was another time Presley crossed with the band while on the road.

It was at Washington / Baltimore airport. We (the Elvis tour) played in Washington and Zeppelin played at the Capital Center. We arrived on Lisa Marie, Elvis’s private jet, and Zeppelin arrived in his Boeing 707, Caesar’s Chariot. It was a fucking visual spectacle to see those two jets parked side by side on the track. ”

Elvis Presley inspired most, if not all, of the great Rock n ‘Roll stars of the’ 60s and ’70s. Zepeplin does not escape this rule and, when their paths crossed, what remained was the vibration for the band and also for the king himself.