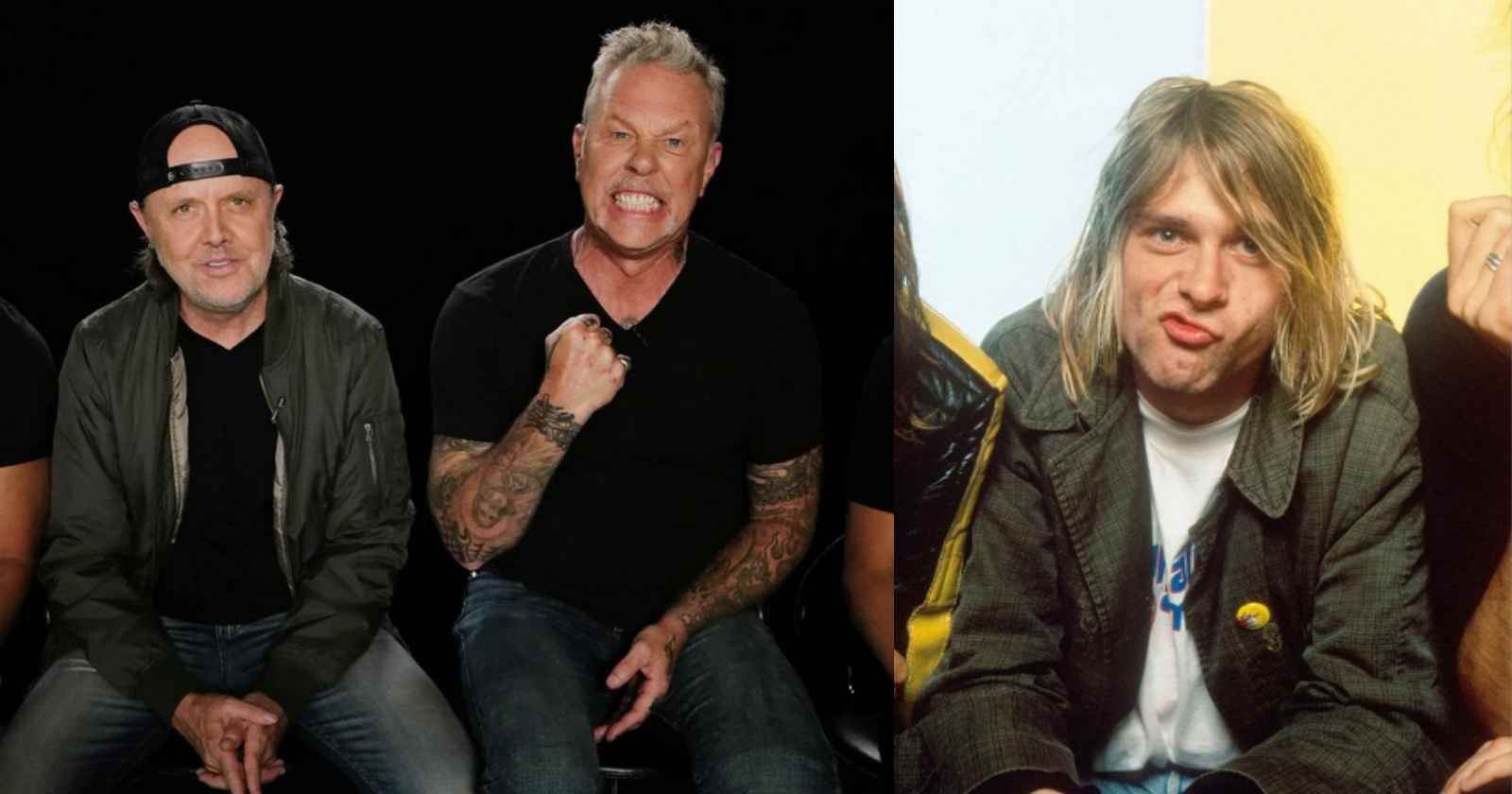 The Grunge Rock movement changed the Rock and Roll scene in the early 90s when bands of the new genre released classic albums, especially Nirvana with “Nevermind” (1991). Just one month before, the Thrash Metal band Metallica had released their best-selling album “Metallica” (1991). The record was one of the few Metal albums released during that time that had a big impact in the Rock and Roll scene.

3 years later, Nirvana’s career was cut short due to Kurt Cobain’s tragic death in 1994 at the age of 27. But the band’s legacy and influence continued, making them one of the best-selling bands of all time with more than 75 million records sold.

Over the years many musicians talked about Nirvana. Some of them were the Metallica members James Hetfield, Lars Ulrich and Kirk Hammett. According to Hammett, Cobain was a Metallica fan and went to see their concert during the “Black Album” tour.

What is the opinion of the members of Metallica on Nirvana

Metallica’s frontman James Hetfield actually likes Nirvana and he even listed the band’s most famous song “Smells Like Teen Spirit” as one of the greatest songs of all time. The musician placed the track at the position number 9 on the list he made for Rolling Stone magazine back in 2004. “When all that Eighthies hair metal was getting overproduced, Nirvana came along with this thrashy garage sound and a huge hook. It was what music needed,” Hetfield told Rolling Stone.

Back in 2000 during a show in Seattle, in the middle of the song “King Nothing”, Metallica started playing the riff for Nirvana’s “Come As You Are”. The audience was pleased with the tribute. That happened 6 years after James and Lars made bad jokes about Cobain’s death during a Metallica concert in London.

Metallica’s drummer Lars Ulrich also likes Nirvana. He recognized the late musician’s importance in an interview with MTV (Transcribed by Rock and Roll Garage) for the special “Testimony 20 Years Of Rock On MTV” (2001). “What else can I add to Kurt Cobain that everybody else hasn’t said already. It was genious and changed the music landscape forever, end of story,” Lars said.

He even said back in 2019 that “Smells Like Teen Spirit” was the best anthem of the last 25 years, when he had Joan Jett on his radio show “It’s Electric“. She was the one who inducted Nirvana into the Rock and Roll Hall Of Fame back in 2014. So when they were talking about the ceremony, Ulrich praised the song.

In an interview with Mötley Crüe‘s Nikki Sixx on the bassist’s show Sixx Sense back in 2015, the Metallica drummer talked about the documentary ‘Montage Of Heck’, that showed a little bit more of Kurt Cobain’s life. The musician praised the movie but said he thought it showed a little too much of the musician’s intimacy. But he once again, said he is a fan the late musician’s work: “As a fan of Cobain, and as a fan of Nirvana, it was almost too much. It was almost too close.”

“Do you know what I mean?! Because, now, next time I hear ‘Come As You Are’ or one of those songs, I’ll still sit there and think of him in a bathtub of him shaving. Or that scene at the end where he’s holding Frances (Cobain’s daughter). Some of that stuff, which was challenging to watch,” Ulrich said.

Guitarist Kirk Hammett not only likes Nirvana, but he also was inspired by the band when Metallica recorded their most successful album as he recalled in an interview for the 2006 documentary “Get Thrashed” (Transcribed by Rock and Roll Garage). Hammett also revealed which Metallica song and album Cobain liked. “When we recorded ‘The Black Album’ I was listening to this band that was on this independent record label. I was really into their first album. I sat down with the singer and his name was Kurt. He said that one of his favorite albums was ‘Ride The Lightning’. (Also) that one of his favorite Metallica songs was ‘Whiplash'”.

“Right after we finished recording ‘The Black Album’, Kurt put out an album called ‘Nevermind’. Then all of sudden, Grunge was everywhere. Kurt was a big Metallica fan. I can remember when we played in Seattle. I think it was 1992, Kurt came to the show. He was in the snakepit, a little area on the stage. I remember the entire time we were playing he kept waving his arms at me. I went over there. His one question to me was ‘Are you guys gonna play ‘Whiplash’ tonight?’ (laughs) And we did,” Hammett said.

In 2021, the guitarist told Classic Rock that he had the chance to hang out with Cobain back in the early 90s after he went to see Metallica during the “Black Album” tour. “Kurt Cobain came to one of our shows in Seattle, on the Black Album tour. I knew Kurt kind of well. I hung out with him quite a bit. He was a pretty big Metallica fan. I was surprised at how much of a Metallica fan he was.”

Hammett continued saying that Rock radio embraced Metallica’s heavy sound at the time. Also that he thinks that it was something that helped the “whole Grunge thing to take hold. (…) I like to think we had something to do with the acceptance of Nirvana.”