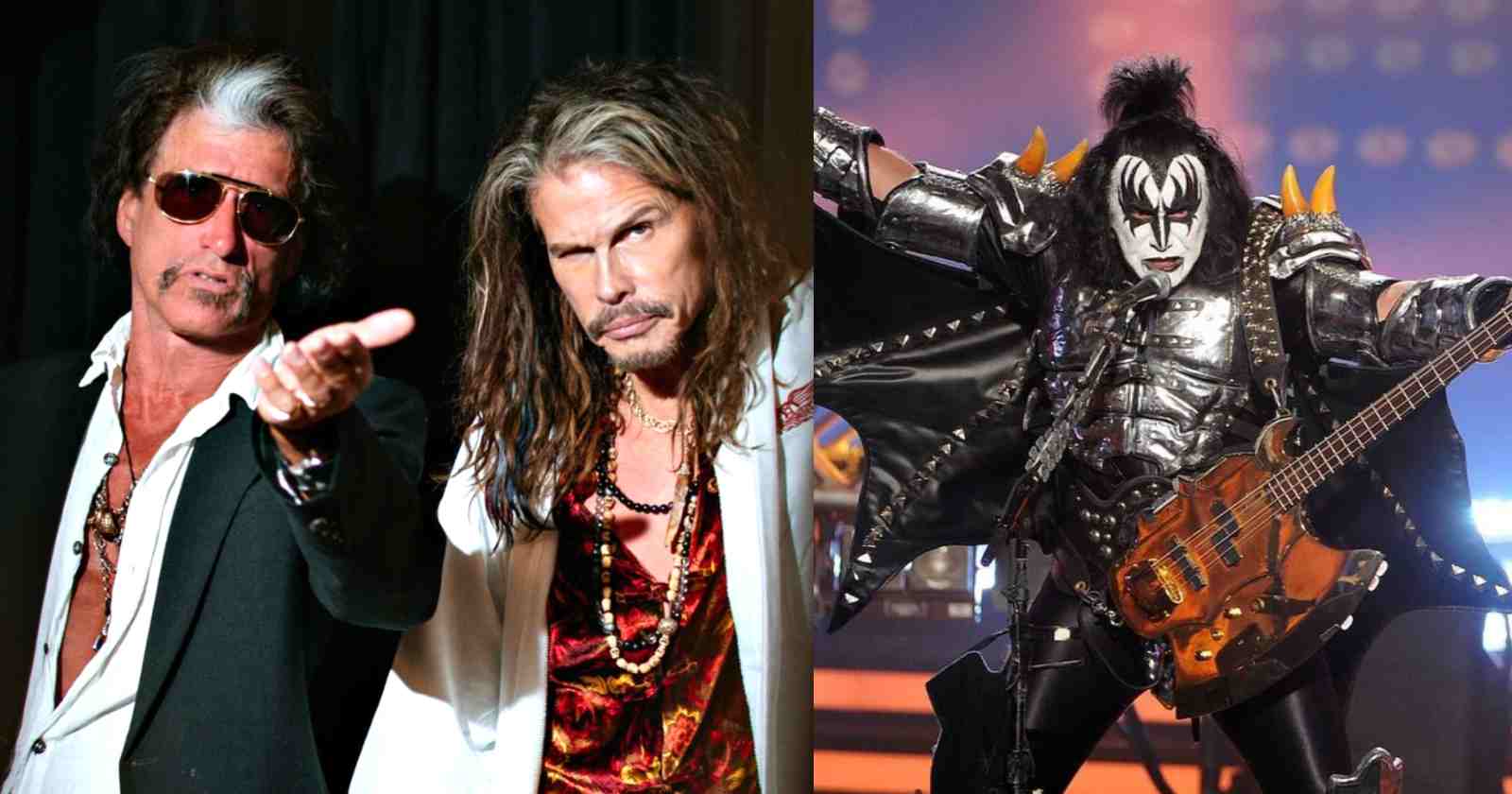 Formed by Gene Simmons, Paul Stanley, Ace Frehley and Peter Criss back in 1973, Kiss is one of the most successful bands of all time that sold more than 75 million records worldwide and inspired a whole generation of musicians. Over the decades many musicians gave their opinions on the group and two of them were Aerosmith vocalist Steven Tyler and guitarist Joe Perry.

Aerosmith and Kiss are American bands that became two of the most influential Hard Rock groups in history, but they not always respected each other. During an interview with Florida radio station The Bone back in 2012, Steven Tyler criticized Kiss, saying that they were a “Comic book rock band (with) spackled faces and a couple of hits.”

In another interview with The Cowhead Show on WHPT Tampa, he recalled a bad experience with them on tour, “I remember when we went out with Kiss in ’76 or something. One of our roadies got into a knife fight with their guys. So I hated them ever since.”

Even though he said that he likes Paul Stanley and Gene Simmons as individuals, calling them “beautiful people”, he continued criticizing their music, “A Kiss lick and a Joe Perry lick — two different worlds. And I, sometimes, depending on the time of day, get offended. I hear that and go, ‘It’s all right. But do they really mean it?’ And, ‘What’s this all about?’ And that’s why I think Aerosmith has been around forever. We really do take ourselves seriously.”

What was Paul Stanley’s response Steven Tyler and Joe Perry

Kiss singer and guitarist Paul Stanley commented on what Steven Tyler and Joe Perry said about his group in an interview Rockline back in 2012, but he gave a peaceful answer, even praising Aerosmith and also sharing a theory on why Tyler said what he said: “Look, I love Steven and Joe, and Aerosmith is a great band. Maybe Steven’s feeling a bit full of himself because he’s got an album coming out. The reality is, in 2003, we did a co-headlining tour and everything was 50-50. But Steven wanted very much and insisted that they close the show. I really don’t care. Because as far as I am concerned, one way or another you’re going to have to come up on the stage.”

“So you can go on before us or after us. And that being said, he certainly had a chip on his shoulder back then. There is some sort of — ambivalence or looking down his nose a bit towards Kiss. So I have to say that seeing him go on after us, to play to an underwhelmed audience and see people walking out didn’t feel too bad to me.

Aerosmith opened for Kiss on some occasions back in the 70s and they had a co-headline tour in 2003, the one cited by Stanley, promoted by Kiss as the “World Domination Tour” and as the “Rocksimus Maximus Tour” by Aerosmith at the time.

In an interview to promote the tour (In the video below, transcribed By Rock and Roll Garage), Joe Perry and Paul Stanley were asked who would be headlining the tour and Joe first answered, saying: “It’s a co-headline bill. It’s just a matter of more of a technical thing about who is going on first or second. We have to follow these guys every night and it’s tough.”

Paul Stanley then said: “I think that Newton’s law of physics was that two objects can’t occupy the same space at the same time. So we worked it out and really what it comes down to is that fans are getting to see arguably the two biggest Rock and Roll bands in America of the last 25 years on the same stage on the same night. That can’t be bad.”

“Both bands has a tremendous amount of respect for what the other can do. You know, although we may approach it different, our roots are all the same. We’re big English Rock and Roll fans, fans of the Blues and fans of giving people their money’s worth.”

Gene Simmons who rose to fame with Kiss in the era of vinyl albums said many times that Rock and Roll music was dead and it was killed by fans due to file sharing. When asked to comment on this statement in an interview with BAM magazine back in 2014, Aerosmith guitarist Joe Perry said: “I think he’s right in the sense that this whole era of rock & roll has dwindled down to literally a cottage industry. When we started, being in a rock band was one step away from being an outlaw. No one ever said, ‘Oh good, you’re playing in a rock band, how wonderful!’ But music was so important to the fans. That was our marching music to the revolution.”