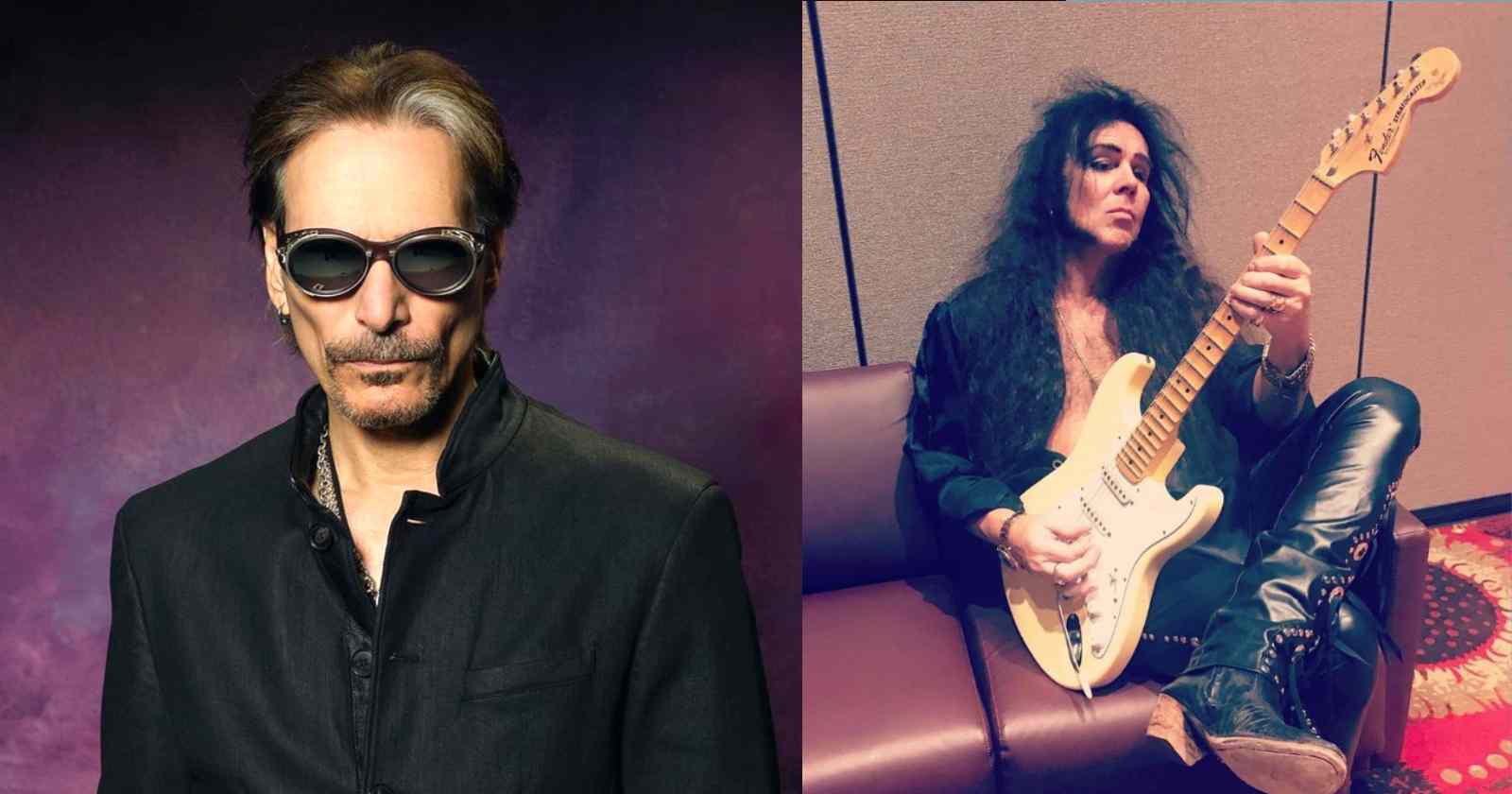 Famous for his work with Frank Zappa, Alcatrazz, Whitesnake and solo career, the American guitarist Frank Zappa is considered a guitar virtuoso for his incredible skills with the instrument. One of his peers is the Swedish guitarist Yngwie Malmsteen, that coincidentally was Alcatrazz first guitar player. Over the years, Steve Vai talked in interviews about other musicians and one of them was Malmsteen.

What is Steve Vai’s opinion on Yngwie Malmsteen

Steve Vai talked about Yngwie Malmsteen in an interview with Music Radar in 2017 how was his reaction when the Swedish guitarist first appeared on the Rock and Roll scene: When he hit the scene, he was doing things none of us thought were possible. He raised the bar in such a way, whether you liked it fast or not, it was an eye-opener. An absolute shocker.”

“What I love about Yngwie is his fierce confidence and developing of a style. You can hear the classical composers, as well as guys like Uli Jon Roth and Ritchie Blackmore, taking it to a whole different level. I’m not necessarily a fan of that style of renaissance baroque classical music, but you cannot deny the breathtaking brilliance he introduced to the guitar when he hit the scene.”

“We’ve been good friends for about 30 years and toured together on Generation Axe. One thing he’s very strict with is doing a soundcheck, during which he sometimes plays differently – doing a lot of blues stuff that leaves me stunned. It’s like, ‘Wow – he can do things to the blues that I’ve never heard!’”

“It’s still an acquired taste, but then even Stevie Ray Vaughan was an acquired taste for some people. Yngwie’s blues is different to everyone else’s. And his beautiful, slow and melodic playing with that gorgeous vibrato is phenomenal… we’d play Black Star together and it was a treat every single night.””

Steve Vai and Yngwie Malmsteen played in 2003 together with Joe Satriani (Who was Vai’s guitar teacher when he was young) in his ongoing project G3 that has different guest musicians from time to time playing classic of their careers and Rock music in general.

Yngwie Malmsteen said in an interview with My Global Mind (Transcribed by Ultimate Guitar) in 2021 that Steve Vai has a unique style that is not so common, because he has a different approach, when reflecting on Vai joining him to play “Black Star” during the Generation Axe tour. “One of the beauties of guitar players and musicians, in general, is their unique style. With Steve, you know he has a unique playing style which is not so common.

“It’s more common for people to all sound the same. He took the second harmony part.

“It is played like it was written, but with his approach, we didn’t sound the same, and to me, that’s the way it should be. I think that is one of the highlights of the show.”

In an interview in the 80s (Transcribed by Rock and Roll Garage), Steve Vai talked about replacing Malmsteen in the Hard Rock band Alcatrazz: “A funny story is… Alcatrazz was out on the road and Yngwie just left the band and they had this major show coming up. His fans, were like hardcore at time. This was when he was coming to fruition and I remeber I was walking out on the stage and nobody knew that Yngwie wasn’t in the band.”

“I learned the whole show in one day and I’m walking and hearing ‘Yngwie, Yngwie, Yngwie’. So it was a unique moment, you know. To say the least, when I got on stage it was great though. Because it was a type of situation you don’t get it very often. So I was savoring it, actually. I mean, it was a lot of humility and a lot of pressure. But I was actually getting a kick out of it. When I went on stage mouths dropped to the floor. I considered a successful gig because nobody clapped but nobody left.”