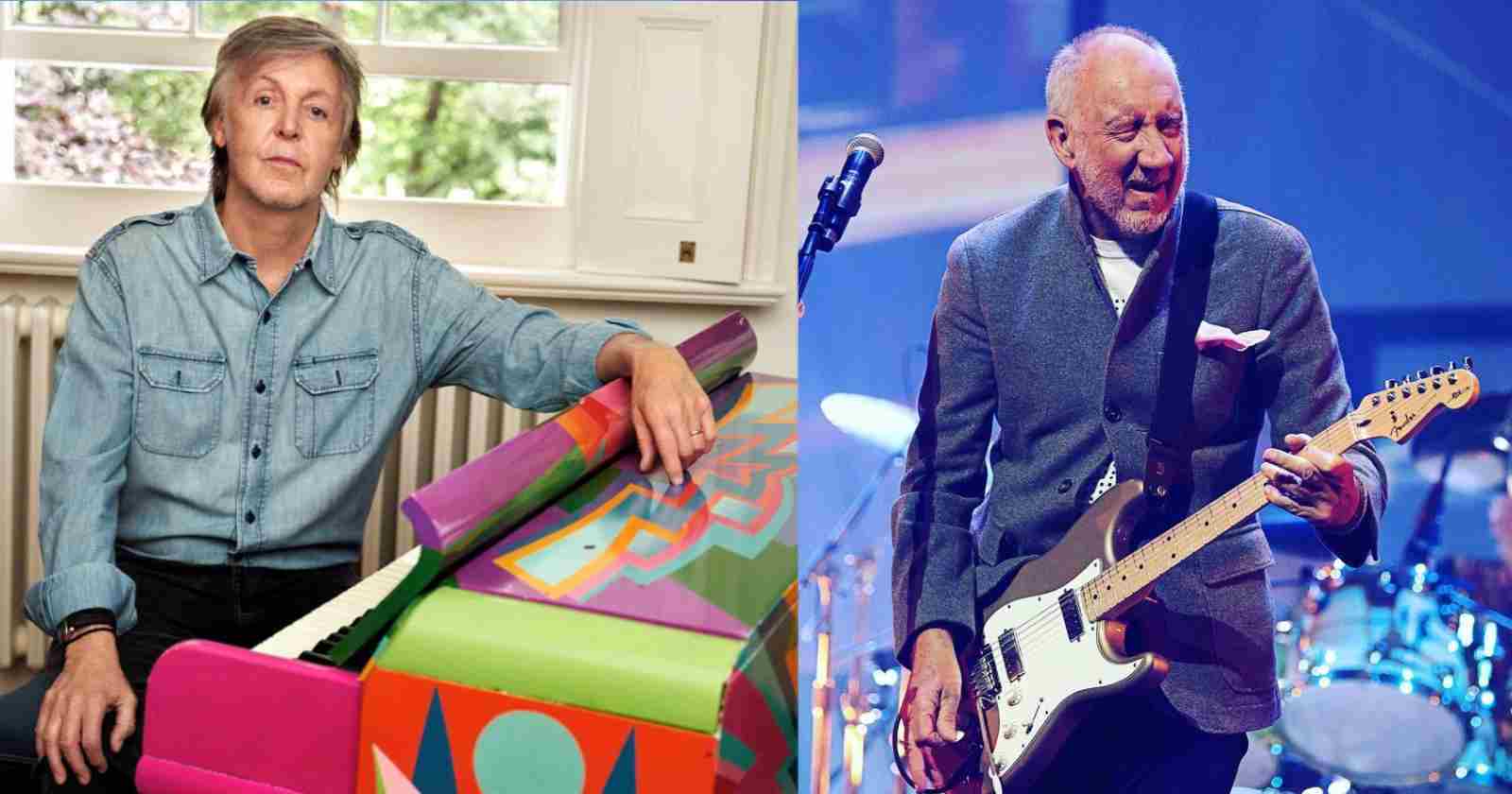 The Who guitarist (sometimes singer) and main lyricist Pete Townshend is an influence for many generations of musicians that grew with the music of the British group. Over the years many famous musicians talked about Townshend, including the legendary Beatles bassist and singer Paul McCartney.

What is Paul McCartney’s opinion on Pete Townshend

The Who guitarist Pete Townshend won the Les Paul award back in 2012 and one of the people who talked about the guitarist in the introduction speeches was Paul McCartney who said (Transcribed by Rock and Roll Garage: “Congratulations on getting the Les Paul award, we all you know, you deserve it. Because man, we go back and I have so many great memories of you and the band, your music, seeing you on TV doing ‘My Generation’, seeing you live playing. To this day, you’re just great.”

“So isn’t funny? I never had a chance to really just stand opposite you and tell you. I would probably be too embarrassed but here it is the ideal occasion for me to just say what I think everybody in the room (wants) to say ‘you are just a great monster, man!”

“The way you played that guitar, the way you write, it’s fantastic. Always has been, hopefully always will be. So congratulations on getting the Les Paul award. How cool is that? We love Les, another great musical monster. We love Les, we love you and congratulations,” Paul McCartney said.

Townshend not always said very nice things about The Beatles

Pete Townshend said in an interview with Rolling Stone in 2021 that The Beatles copied The Who’s album “Who Sell Out” in the record “Sgt. Pepper”, saying: “They framed their songs around the Sgt. Pepper idea and you framed yours around a pirate radio station. No, no. Come on. The Beatles copied us!”

“Paul McCartney came up to me at the Bag O’Nails (music club), which we mention in the album artwork. He was always very, very sweet to me. I should say that first. But he said to me that he really loved our mini-opera, which was called ‘A Quick One, While He’s Away.’ That was on the album that preceded The Who Sell Out. And he told me they were thinking about doing similar things.”

“I think anybody that was even a little bit art school back then, a little bit adventurous. Of course, the Beatles were encouraged to experiment to the max in the studio — would have thought about doing something which was a concept.”

“Sgt. Pepper, there isn’t much of a concept to that record. But to this day, whenever I sit down and get the vinyl out, stick it on, something always leaps out that I’ve never noticed before. So I think the same is true with Pet Sounds. Those two albums are seminal changes in what we all believed was going to be possible if you were in a band making records. Just extraordinary leaps of faith that the audience would accept it.”

Back in 1982 in a conversation with Rolling Stone magazine, Pete Townshend said he considered The Beatles a pop phenomenon and not a Rock and Roll band as he explained: “I’ve always said that I’ve never been a big fan of the Beatles. To me rock was the Stones, and before that Chuck Berry. Before that, maybe a few people who lived in fields in Louisiana.”

“I’ve always enjoyed some of their stuff as light music, with occasional masterpieces thrown in. But with a lot of their things, you can’t dig very deep. Either you come up against Lennon’s deliberately evading what it is that he’s trying to say. So it’s inscrutable, or Paul McCartney’s self-imposed shallowness, because he sees music as being . . . I mean, he’s a great believer in pop music, I think. But I wonder whether McCartney, perhaps, rests a little bit on the laurels of the Beatles.”

Pete Townshend was inducted into the Rock and Roll Hall of Fame as a member of The Who back in 1990 by U2. During the induction speech, the Irish singer Bono said: “More than any other group that ever was, The Who were our role models”.