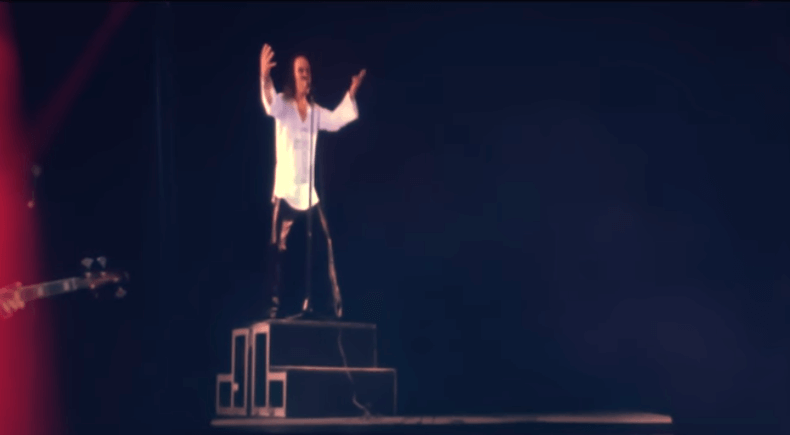 A fan captured the full show of the Dio Returns: The World Tour concert in Bucharest, Romania on December 17, 2017. The performance hit YouTube at the end of last year.

The show features the hologram of Ronnie James Dio, legendary singer who died in 2010. The holographic figure is accompanied by Craig Goldy on guitar, Bjorn Englen on bass, Simon Wright on drums and Scott Warren on keyboards. In certain songs, Tim “Ripper” Owens and Oni Logan take over the vocals.

The 2018 tour dates initially announced are for Finland, Sweden and Norway are being rescheduled for a larger run through Scandinavia in 2018. And it will also go to Argentina, Australia, Brazil, Canada, Chile, Colombia, Ecuador, France, Germany, Japan, Mexico, New Zealand, United States, Venezuela and other countries, with more dates to be announced.

On November 25, 2009, Wendy, his wife and businesswoman, announced that he had been diagnosed with stomach cancer.

Read what she said at the time:

“Ronnie was diagnosed at an early stage of stomach cancer. We are starting treatment right away at the Mayo Clinic.” After Ronnie kills this dragon, he will be back on the stage, to which he belongs, doing what he loves most, singing to his fans. Long to rock and roll, long life to Ronnie James Dio. Thank you all the friends and fans from all over the world who have sent messages of good improvement. This has really helped us keep our spirits strong.

In March 2010, Wendy posted an online update on her condition:

“Ronnie did his seventh chemotherapy session, another CT scan and another endoscopy, and the results are good – the main tumor has shrunk considerably, and our clinic visits in Houston are now every 3 weeks, not more every 2 weeks . ”

Dio started treatment with the disease at an early stage and had reduced the number of shows in recent months. On May 4, 2010, Heaven and Hell announced that they were canceling all presentations that would occur in the summer because of Dio’s health condition.

“Today my heart is broken, Ronnie died at 7:45 am on May 16. Many, many friends and family members were able to say goodbye privately before he left peacefully. love and support that you have given us. Please give us a few days of privacy to deal with this terrible loss. Please be assured that he loved you all and your music will live forever. ”