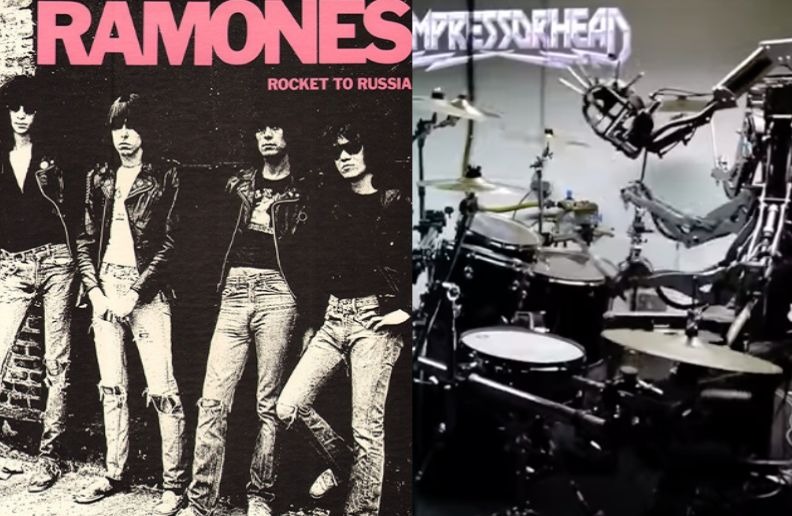 Compressorhead is a project robot band of Berlin-based artist Frank Barnes and collaborators Markus Kolb and Stock Plum consisting of a robot “band” that plays on real electric and acoustic instruments. The robots are made from recycled parts and are controlled via a MIDI sequencer. The group is notable for featuring real-life brothers and former NoMeansNo rhythm section members John and Rob Wright.

Below you can se the band performing Ramones “Blitzkrieg Bop”:

The first robots (Stickboy, Junior, Fingers and Bones) were built between 2007 and 2012 and their first live performance was held at the 2013 Big Day Out festival in Australia. The band started out playing covers of bands such as Motörhead, AC/DC, Pantera and the Ramones, with videos of the band becoming popular on the internet in 2013.

In early 2013, Barnes recruited John Wright of the Canadian punk bands NoMeansNo and The Hanson Brothers as a songwriter and “musical director” for the group. Three songs from this collaboration have so far been released via the band’s YouTube page: the original songs “Compressorhead”  and “Speed Walking Lady” and an instrumental cover of the Hanson Brothers song “My Girlfriend is a Robot”.

In November 2015, the team behind the band started a crowdsourcing campaign on the platform Kickstarter to raise US$290,000 to build a robotic “singer”.

In 2017, the band added Mega-Wattson, voiced by John Wright’s brother and NoMeansNo frontman Rob Wright, to the band. Both Wright brothers sing and perform as multi-instrumentalists on Compressorhead’s debut album, Party Machine.