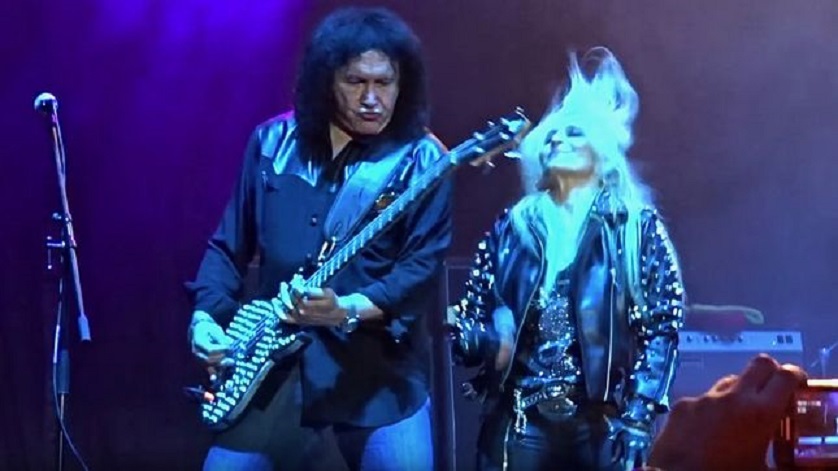 Kiss vocalist and bassist Gene Simmons joined Doro Pesch during a show at the Masters Of Rock festival in Czech Republic to play Kiss’s “War Machine.”

In 1990, Gene was the executive producer of Doro’s second solo album. Later, she said the experience of working with Simmons “It was a dream that came true.”

“I’ve always been a big fan of him and I became a huge fan of the person after working with him. So smart. I love it! It was great to see him working with all the musicians. He was a great motivator, fantastic! Every time before going to the studio, I was driving my car for about 20 minutes and I was very happy. Just before I entered the studio, my knees were shaking. ‘Not again!’ [Laughter] He made me very happy in many ways. He really tried his best. I remember a song that the mix was not coming out right.”

“I was totally upset. I was very nervous. Gene said, ‘Go to your room and wait there.’ I was in Los Angeles at 9 o’clock in the morning, the receptionist called me and said there was a gentleman here and left the tape for you. I could not believe it was nine o’clock and I said, ‘Alright.’ I listened and Gene dialed. It was the song ‘Mirage’ and it was so good. That brought me to tears. It came out so good. He definitely made sure the mix was perfect. He was there for us in many ways. I think he was the best producer we’ve ever had. ”

Listen to Alice Cooper’s new version for his classic “Poison”
Lars Ulrich talks about the first time he met James Hetfield, “he was shy”
Advertisement
To Top