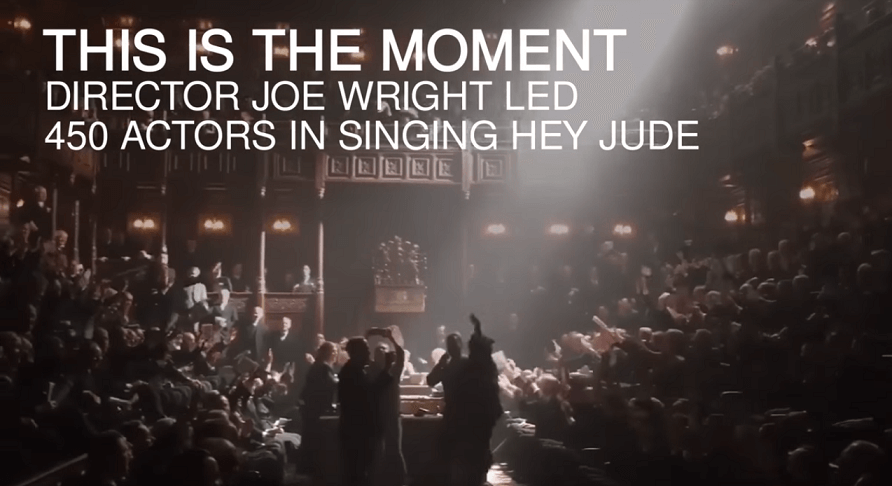 Darkest Hour, Winston Churchill’s war biopic had an interesting moment during the shooting, where Gary Oldman and the crew sang Beatles’ classic “Hey Jude”. The actor Samuel West uploaded a video of the moment on the British House of Commons’ set when Wright encouraged 450 extras to sing along.

“Been waiting to post this for a year. Joe Wright… leads 450 MPs in a warmup singing of ‘Hey Jude’ between takes. Gary Oldman as Churchill makes an entrance at the end.”

Been waiting to post this for a year. Joe Wright, director of Darkest Hour, leads 450 MPs in a warmup sing of Hey Jude between takes. Gary Oldman as Churchill makes an entrance at the end.

Darkest Hour is released in the UK today. Hope you like it pic.twitter.com/UN6posK8zf

The movie shows Winston Churchill (Gary Oldman) about to face one of his greatest challenges: to take over the position of First Minister of Great Britain. At the same time, it begins to cost a peace treaty with a German that could mean the end of years of conflict.

Watch one of the last Dolores O’Riordan appearances on TV
Back In Time: Watch Megadeth’s full concert in 1992 tour
Advertisement
To Top