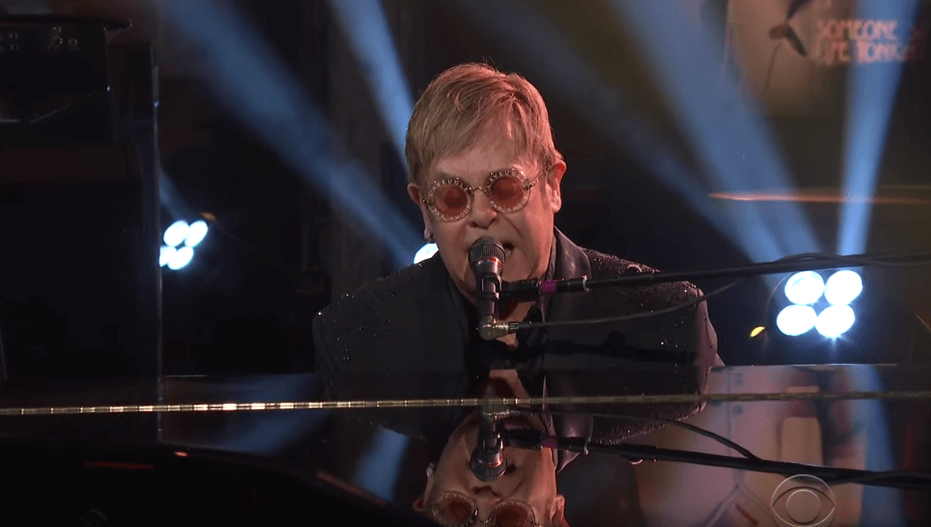 Elton John performed a great version of “I’m Still Standing” on The Late Show with Stephen Colbert last monday. The song is a hit of 1983, that appears on John’s new compilation Diamonds.

“I’m Still Standing” is from his Platinum-certified 1983 album, Too Low for Zero.

Because of the promotion video the song on then-new MTV, “I’m Still Standing” became a big hit for John on both sides of the Atlantic, peaking at #1 in Canada and Switzerland, #4 in the UK, and #12 on the U.S. Billboard Hot 100. The video, directed by Russell Mulcahy, was shot in Cannes (InterContinental Carlton Cannes) and Nice on the Côte d’Azur in France and features the colors of the French flag.

And he also played “Crocodile Rock”

Written by Elton John and Bernie Taupin, the song was recorded in summer 1972 at the Château d’Hérouville studio in France (it was listed as “Strawberry Studios” in the album’s credits), where John and his team had previously recorded the Honky Château album.

John also sat for an interview with Colbert, that he discussed fatherhood “the best thing that ever happened to me” and remembered meeting his longtime writing partner Bernie Taupin.