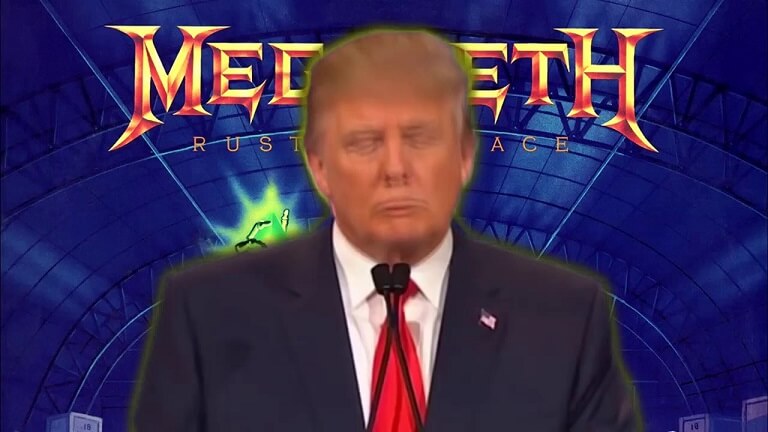 The Youtube channel Lars Von Retriever made a funny video that takes pieces of Donald Trump’s speeches and put them together as he was singing the classic Megadeth song “Holy Wars”.

“Holy Wars… The Punishment Due” is the opening track of Megadeth’s 1990 album Rust in Peace. The song has an unusual structure: it opens with a fast thrash section, shifting at 2:26 after an acoustic bridge by Marty Friedman to a different, slower and heavier section called “The Punishment Due”, interspersed by two guitar solos played by Friedman, before speeding up again with a third and final solo played during this segment by Dave Mustaine. The entire song is commonly referred to as “Holy Wars”.

The lyrics deal with global religious conflict, particularly in Israel and Northern Ireland. In an interview with the UK magazine Guitarist, Dave Mustaine said that he was inspired to write the song in Northern Ireland, when he discovered bootlegged Megadeth T-shirts were on sale and was dissuaded from taking action to have them removed on the basis that they were part of fundraising activities for “The Cause” (i.e. the Provisional Irish Republican Army). “The Punishment Due” is based on the popular Marvel comic book character, the Punisher.