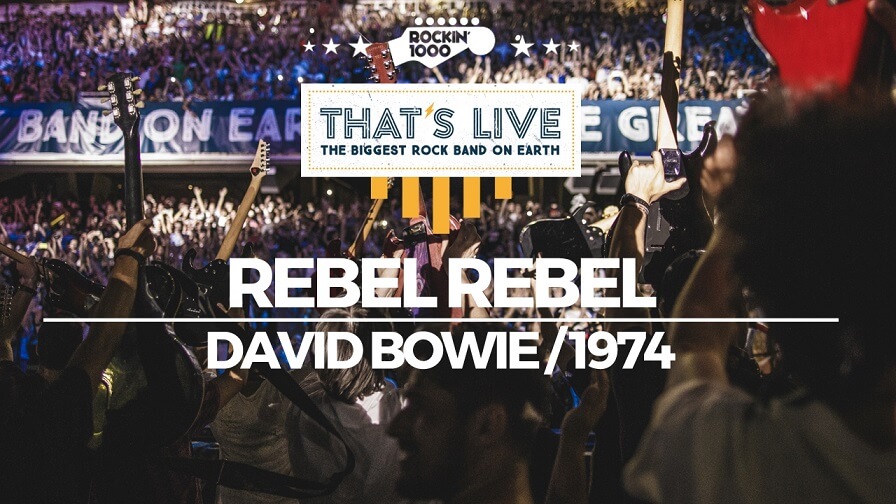 The project Rockin’1000 reunites always this number of musicians to play a particular song and this time.

In 2016 they organized “That’s Live” the first concert ever of the Biggest Rock Band on Earth!1000 musicians, one stadium, playing the songs that made the glorious History of Rock!

The first official video released at the time was David Bowie’s “Rebel, Rebel”.

“Rebel Rebel” is a David Bowie song, released in 1974 as a single from the album Diamond Dogs. Quoted as his most recorded work by other artists, the track is seen as Bowie’s true farewell to the glam rock movement, of which he had pioneered. The band is considered a protopunk song.

Originally written for a canceled Ziggy Stardust musical in late 1973, “Rebel Rebel” was Bowie’s latest single in the glam rock style that had been his trademark. It was also his first single since 1969 without the participation of guitarist Mick Ronson, Bowie himself being the guitarist in this and almost all other tracks of Diamond Dogs, producing what NME critics Roy Carr and Charles Shaar Murray called ” dirty rocking noise that owed both to Keith Richards and the Ronno party.”

The song is notable for its lyrics about ambiguous sexuality (“You have your mother in a whirlwind / She’s not sure if you’re a boy or a girl”), as well as for her signature riff that the music journalist Kris Needs described as “a stuck song like” Satisfaction, “by the Stones.” Bowie himself said later: “It’s a fabulous riff! Simply fabulous! When I tripped on it, it was ‘Oh thanks!'”