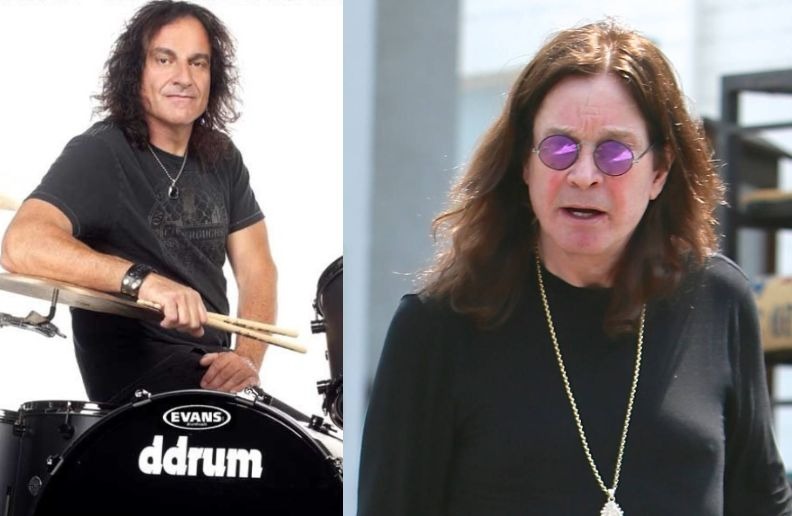 In an interview with Eddie Trunk,  drummer Vinny Appice (Dio, Black Sabbath) revealed that before joining Black Sabbath in the 80s he was invited by Ozzy Osbourne to play in his solo band, but he said no.

“I got a call from Sharon Osbourne to play with Ozzy before he started [his solo band].

“Sharon called me up, and said, ‘Hey Vinny, we heard about you. Ozzy’s going to put a band together. Do you want to fly to England, go hang out with Ozzy?’…

“And I’ve never been out of the country, except to Canada. Like, ‘Where’s England? Should I do this? Is he crazy?’

“He was a jokester. I like to joke around, we had a good laugh. So I went down to rehearsal the next day, I brought my little drum set – four toms. They set up this little kit and Tony goes, ‘Can you play double bass? The kit’s so small.’

“‘Oh, no, I don’t really play double bass. I’ll add to it.’ So I added two drums up above my shoulder. As the thing progressed, I kept adding drums.”

Back then, did you have problems with it?

“No, but every time I got onto the bus, it would burn, even back then. It got to the point at the end of the tour where I couldn’t move my arm up. The same thing happened to Carmine a couple years later.”

Focusing on Ozzy, Vinny added later during the chat:

“When I played with him in 2000, he had a minor medical problem, I think a heart thing. 1999, actually. I played about a month in Europe. I woke up one day and I said, ‘You know, I’m going to Home Depot to fix my sprinklers today.’

“Then the phone rings at 7 am, there’s Sharon Osbourne, ‘Vinny, we want you to fly to England.’ So I told Sharon, ‘Listen, I was supposed to fix my sprinklers today.’ Long story short, they called me, ‘Now what do I do?’. I’m playing clubs with Ronnie, this is a good thing, it would be good for me.

“It was a hard decision, but I sat down with him, ‘Okay, I’m cool with it, do what you got to do.’ I went over and played with them. In the first show, Ozzy introduces me, he introduces the band at some point.