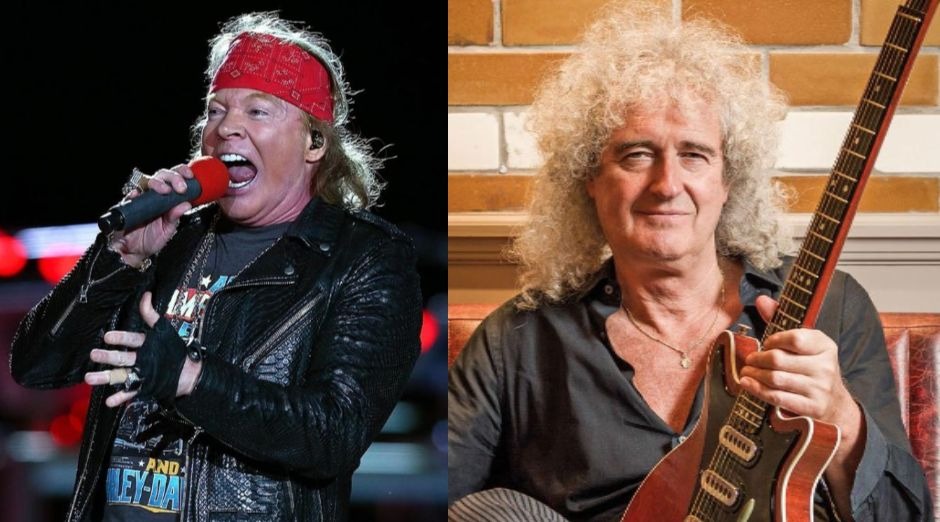 The website Guns N’ Roses Central reported that snippets of unreleased Guns N’ Roses songs have surfaced online. One of the songs is the track “Atlas Shrugged” recorded in 1999 with Brian May of Queen.

“The GN’R stuff in the locker was sold to a fan who has all this stuff. Tracks include ‘Perhaps’ (3rd Brian May song), ‘Zodiac,’ ‘Hard School’ (you know it as ‘Checkmate’), ‘Oklahoma,’ ‘Atlas,’ ‘Billionaire,’ ‘3 Dollar Pyramid,’ and all of ‘AFD’ re-recorded and so much more.

The source also pointed out:

“The 15 CDs are not just full songs. Example, one CD had various drum tracks and guitar tracks. There are a lot of instrumentals. Only about 15 songs have actual lyrics. In fact, the way this was found out was because for a short time 1 CD appeared on eBay, but was removed when the board member from this part purchased it and then bought the rest of them.

“Both lockers were sold! The ‘UYI’ tapes were sold to a group of collectors who chipped in. But it’s nothing really special because they sound just like the final versions. Locker 2 with ‘Chinese’ stuff was sold to one person and that person is a member of this board.

“They refuse to talk, though, which is understandable. I know who all the buyers are. I’ve spoken to the original person who bought the locker which Chinese stuff! He isn’t a GN’R fan so he didn’t realize the value of what he had.”