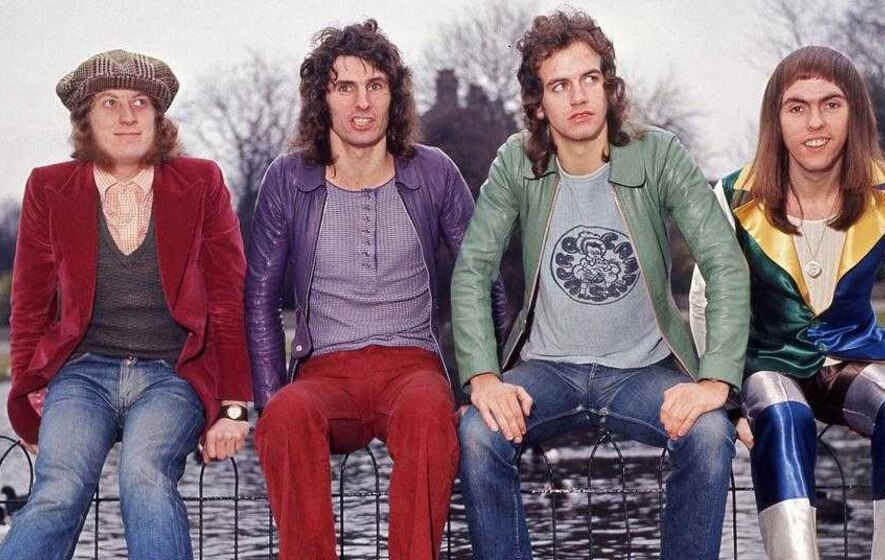 But unfortunately, the band broke up in the end of the 80’s and was never the same, although the guitarist Dave Hill still tour with “Slade II” with Don Powell on drums too.

Well, even though they had a unique style, some bands has similarities with The “Boys that Make Big Noize”.

The band was formed in London in 1968 and achieved their first hit, “Funny Funny”, in 1971 after teaming up with songwriters Nicky Chinn and Mike Chapman and record producer Phil Wainman. During 1971 and 1972, their musical style followed a marked progression from the Archies-like bubblegum style of “Funny Funny” to a Who-influenced hard rock style supplemented by a striking use of high-pitched backing vocals.

Mud (now Mud II) are an English glam rock band, formed in February 1966. Their earlier success came in a pop and then glam rock style, while later hits were influenced by 1950s rock and roll, and are best remembered for their hit singles “Tiger Feet”, which was the UK’s best-selling single of 1974, and “Lonely This Christmas” which reached Christmas number 1 in December 1974. After signing to Rak Records and teaming up with songwriters/producers Nicky Chinn and Mike Chapman, the band had fourteen UK Top 20 hits between 1973 and 1976, including three number ones.

The New York Dolls were an American hard rock band formed in New York City in 1971. Along with the Velvet Underground and the Stooges, they were one of the first bands of the early punk rock scenes. Although their original line-up fell apart quickly, the band’s first two albums—New York Dolls (1973) and Too Much Too Soon (1974)—became among the most popular cult records in rock.