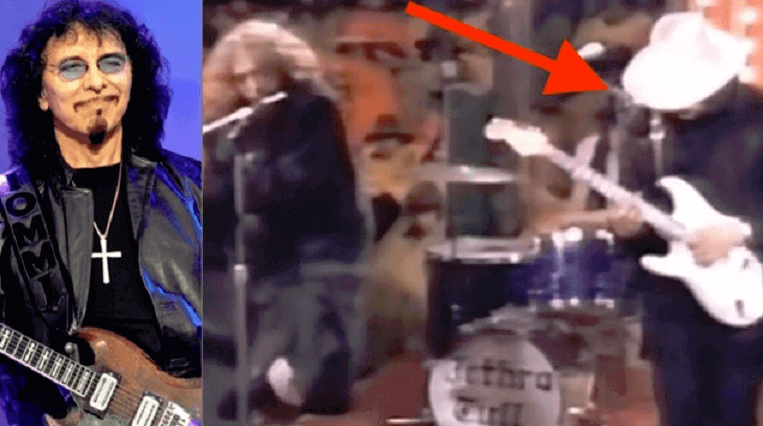 Legendary Black Sabbath guitarist, Tony Iommi talked about his time on Jethro Tull before he made Black Sabbath.

Read what he said at Whitley Bay Film Festival:

“We weren’t [called] Sabbath [yet], we were called Earth. And I went with Jethro Tull. It was just a short stay and it wasn’t right for me. And I came back and we got the band back together again, with Ozzy and Bill and Geezer.

“And we realized then that we need to do something that is different to what a lot of other people were doing. And that’s sort of where it started, jamming around.

“The first one was ‘Wicked World,’ and the second song we did was ‘Black Sabbath’ [subsequently released on the 1970 album ‘Black Sabbath’ by the band Black Sabbath]. And that was the benchmark of where we went from. As soon as we’ve done that – that’s it, this is where it’s gonna go from here.”

Did you learn anything from [frontman] Ian Anderson from time in Jethro Tull in terms of putting the band together?
“Yes, I did actually. I learned the way they work and it was very different from the way we worked. It was – nine o’clock in the morning, rehearsal. Well, we didn’t know what nine o’clock was…

“So I come back going to the others, ‘Nine o’clock, we’re gonna start work.’ And I was the only one that could drive then, so I had to pick everybody up to go to the rehearsal. Which was… I cut my own throat there.

“So that’s what we did. We got into this regime and they were willing to do it. Because I’ve been with Jethro Tull, they knew I had that offer and turned it down.”

Why did you turn it down?

“Well, because… We were a band, with Ozzy and Bill and Geezer. With Jethro Tull, it was weird because when I joined them, the first rehearsals, we were gonna go on a break for lunch at 12 o’clock. And off we went for lunch, and I went and sat with Ian.

“And it’s weird because I’ve really gotten well with Ian. And I spoke to him yesterday… And I haven’t actually told him this. [Laughs] Because he probably went, ‘Why is he leaving?’ [Laughs]

“I wanted to work myself, really. I remember going to see their manager and he says, ‘You’re really lucky to be in this position.’ And I went, ‘Well, I’m lucky because they want me. It’s not because it’s luck.'”

Was Ian a controlling guy?

“It requires somebody in the band. Jethro Tull – Ian was the one who said how it goes. And they relied on my opinion and relied on me to do that.

“And it worked. Towards the end, I didn’t like it. I didn’t want to be constantly called up. And we had that a few times. [Laughs]”

Where did those early Sabbath riffs come from?

“I nicked them off of Led Zeppelin. [Laughs] It was… I don’t really know. It’s just in the head. That’s sort of a way we were going. I’d start playing something and everybody going, ‘Oh, I like that.’

“And then we’d build the song up from there. Or they’d say, ‘I don’t like that and we didn’t do it.’ But that’s sort of the way it worked.”