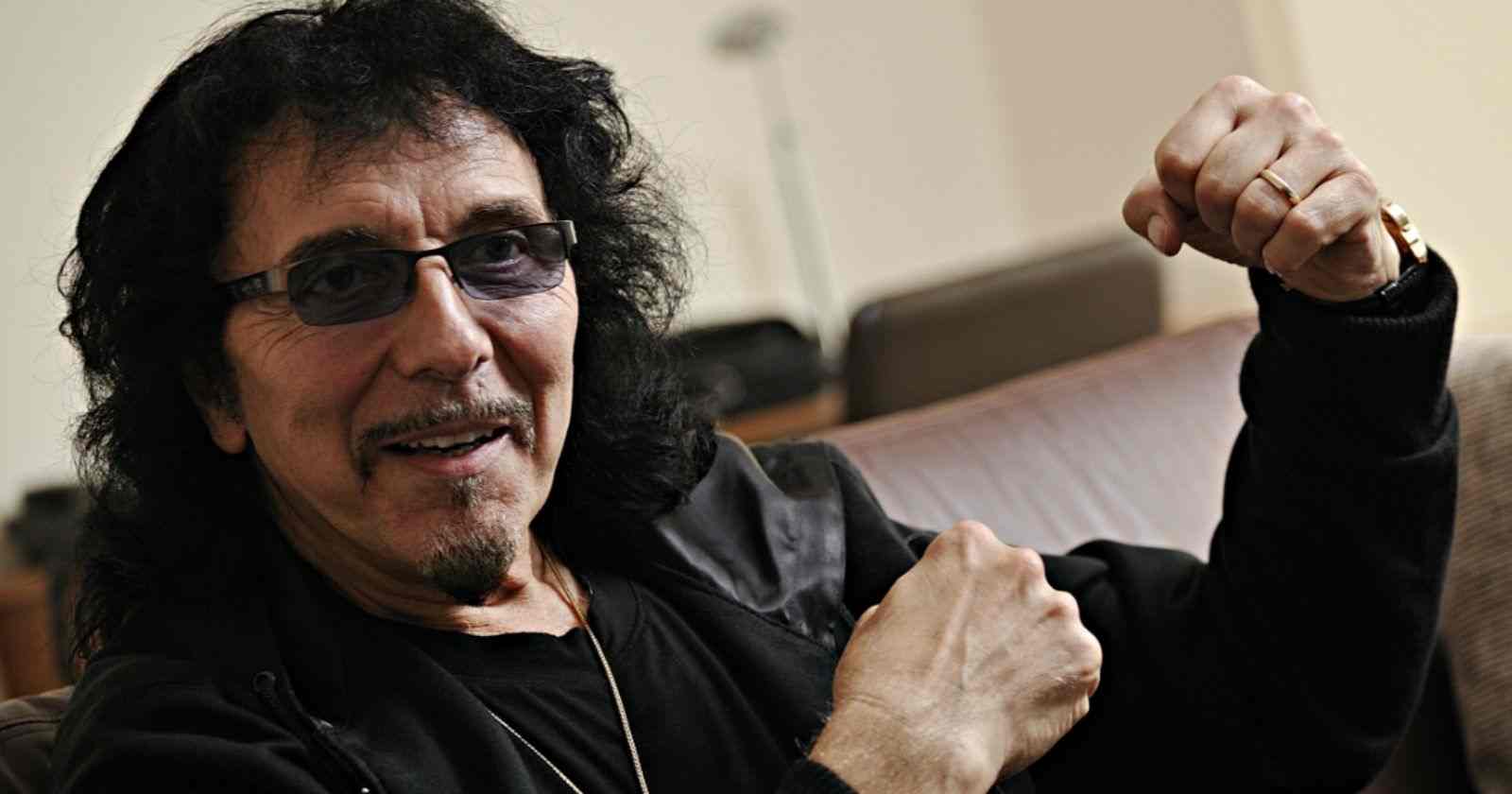 Black Sabbath guitarist Tony Iommi is the only member of the band to be in all the albums of the band. In an interview back in 1992 with Guitar World he shared the secrets behind every classic album of the band, from Black Sabbath (1970) to Dehumanizer (1992).

“Money was really scarce in those days, so the whole album was recorded in eight hours on an eight-track machine at Regent Sound in London. We were so pleased to have been given the chance to make a record that the whole experience seemed very luxurious. A record deal in those days was a very big thing.”

“Most of my solos on that record were done the same way I do them now – very off-the-cuff. I performed the extended solo on Warning in only two takes. The first one I played was much better than the second one, but our so-called producer, who had never produced an album in his life, decided to put the second one on the record without consulting us.”

“For that album, I used my Gibson SG – the same one I used for the next 10 years -and either a Laney or Marshall cabinet. We didn’t even have time to work on getting sounds – we just set up mics in front of the cabinets and went off. We just played as if we were playing live.”

“I think the reason this record turned out so well was that we had a long time to work out all the material. We were playing seven 45-minute sets each day in a dusty old club in Switzerland, in front of anywhere from three to two dozen people.”

“Rehearsing like that for six weeks really tightened us up. It also enabled us to experiment more because we really only had enough songs for one set each day – certainly not seven. It gave us a chance to make stuff up and rearrange existing songs.”

“During Master of Reality, we started getting more experimental and began taking too much time to record. Ultimately, I think it really confused us. Sometimes I think I’d really like to go back to the way we recorded the first two albums. I’ve always preferred just going into the studio and playing, without spending a lot of time rehearsing or getting sounds.”

“We tried recording Into the Void in a couple of different studios because Bill [Ward] just couldn’t get it right. Whenever that happened, he would start believing that he wasn’t capable of playing the song. He’d say, ‘To hell with it – I’m not doing this!’ There was one track like that on every album, and Into the Void was the most difficult one on Master of Reality.”

“The coughing that opens the album is actually me! Ozzy had pulled out a joint, and I nearly choked to death on the bloody thing – and they recorded it! I didn’t have any idea that it would end up on the record.”

“We wrote and recorded Vol. 4 at the Record Plant in Los Angeles. LA was a real distraction for us, and that album ended up sounding a bit strange. The people who were involved with the record really didn’t have a clue. They were all learning with us, and we didn’t know what we were doing either.”

“The experimental stage we began with Master of Reality continued with Vol. 4, and we were trying to widen our sound and break out of the bag everyone had put us into.”

“Musically, we liked that drug-oriented sound. [laughs] So we went back to L.A. and rented the same house, the same studio, the same drugs, everything. But we weren’t able to create anything there, so we returned to England.”

“We started thinking the band didn’t have it any more, and we knew we had to do something to get it back. So we rented an old castle in Wales and rehearsed in its spooky old dungeon. After we wrote Sabbath Bloody Sabbath, things just started coming fast and furious again,” Tony Iommi said.

“Black Sabbath fans generally don’t like much of Technical Ecstasy. It was really a no-win situation for us. If we had stayed the same, people would have said we were still doing the same old stuff. So we tried to get a little more technical, and it just didn’t work out very well.”

“We recorded the album in Miami, and nobody would take responsibility for the production. No one wanted to bring in an outside person for help, and no one wanted the whole band to produce it. So they left it all to me!” Tony Iommi said.

“Right before we were supposed to record Never Say Die, Ozzy quit the band. We never wanted him to leave, and I think he wanted to come back – but no one would tell the other how they felt. So we had to bring in another singer and write all new material.”

“Then, two days before we were finally ready to record again, Ozzy decided to come back. But he wouldn’t sing any of the stuff we had written without him! Bill had to sing on one track because Ozzy refused to sing it. We ended up having to write in the day so we could record in the evening, and we never had time to review the tracks and make changes. As a result, the album sounds very confused.”

“The problems with Ozzy continued, and eventually we knew we had to bring in somebody else. Geezer and Bill would say to me, ‘Either Ozzy goes or we go.’ At that point, Bill was becoming the businessman of the band, with his briefcase and his haircut, and he fucking goes and tells Ozzy, ‘Tony wants to get rid of you.’ [laughs]”

“To this day, Ozzy thinks I fired him on my own, when it was really the other two who wanted him out. But I wasn’t pleased with him either. Mixing the album even caused my marriage to break up. As with Technical Ecstasy, everyone went on a holiday when it came time to mix. My wife kept asking, ‘How come you’re the only one working while everyone is in bloody Barbados?’ ” [laughs]” Tony Iommi said.

“After going through 11 months of frustration with Ozzy, Ronnie James Dio was a great addition to the band. He had a new way of looking at things, and it gave us a new approach.”

“Ronnie was very excited about joining the band, but I think it was difficult for him to fill Ozzy’s shoes. We tried to make it as easy on Ronnie as we could because, even though we went out on a limb firing Ozzy, we believed in what we were doing – and it worked.”

“We were all going through a lot of problems at that time, most of it related to drugs. Even the producer, Martin Birch, was having drug problems, and it hurt the sound of that record. Once that happens to your producer, you’re really screwed.”

“Mob Rules was a confusing album for us. We started writing songs differently for some reason, and ended up not using a lot of really great material. That lineup [Iommi, Dio, Butler, Ward] was really great, and the whole thing fell apart for very silly reasons – we were all acting like children. But I think we needed to split with Ronnie and gain a little breathing space to be able to do what we’re doing with him now,” Tony Iommi said.

“When we first put that line-up together [Ian Gillan, Iommi, Butler, Ward], it was only on paper – done purely by lawyers. Ian is a great singer, but he’s from a completely different background [Deep Purple], and it was difficult for him to come in and sing Sabbath material.”

“To be honest, I didn’t like some of the songs on that album – and the production was awful. We never had time to test the pressings after it was recorded, and something happened to it by the time it got released.”

“That was the first album I wrote with [drummer] Cozy Powell, even though we had known each other for almost 20 years. That album was put together very quickly, and we produced it ourselves. I like Headless Cross very much, but I wouldn’t compare it to Dehumanizer, because they’re very different.”

“Getting back together with Ronnie James Dio was a little rough in the beginning. There were all kinds of egos bouncing around. We had been separated for 10 years, and it took us a long time to get to know each other again.”

“Tony Martin had been our singer for the last three albums, and I must admit, I did feel bad that we had to let him go. But the truth is, he wanted to get out. He was getting more into writing for other people instead of performing Sabbath material. He understood the situation with Ronnie, so it really wasn’t a problem.”

“Before we [Iommi, Dio, Butler and drummer Vinny Appice] started writing Dehumanzer, we talked about what we wanted. We decided to make a very heavy Black Sabbath record that had a real natural sound and a ton of doomy riffs – nothing too jolly.”

“The material is sort of a cross between the old stuff and Heaven and Hell. It has a raunchy sound – something I think has been missing from Sabbath over the last few years. This is very much a classic Black Sabbath record. In fact, I didn’t expect it to come out quite this good!” Tony Iommi said.