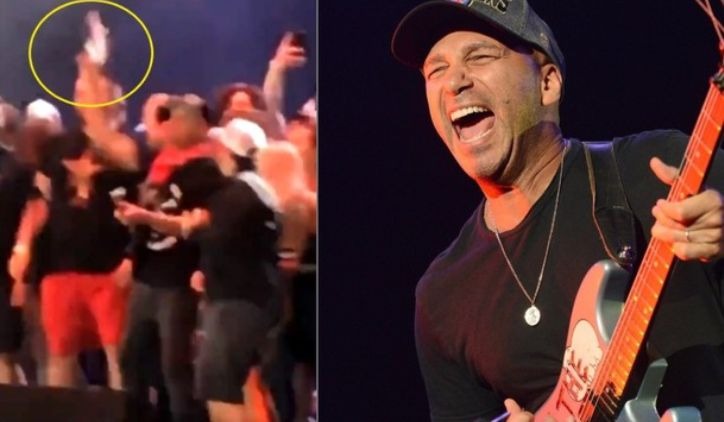 Guitarist Tom Morello (Rage Against The Machine, formerly Audioslave) drew attention by throwing away a fan cell phone on stage. The fan was making a selfie with him on the stage of a show. The event took place in a commemorative presentation of 101 WKQX radio at the Hollywood Casino Amphitheater in Tinley Park, United States, last Saturday (15).

At the time, it is possible to see that Tom Morello is accompanied by dozens of people on stage. One of the presents approaches the guitarist to register a selfie, but is prevented after the musician picks up the man’s cell phone and throws away.

After a video that records the moment it was released on social networks, Tom Morello himself shared it, saying: “Put a cell phone in my face on the stage and I’ll throw it.”

Put a phone in my face onstage and I’ll throw it. #LiveInTheMoment Great fun today at @101WKQX show. #SweetHomeChicago https://t.co/V6DoQiMKas

Thomas Baptiste Morello (born May 30, 1964) is an American musician, singer, songwriter, actor and political activist. He is best known for his tenure with the band Rage Against the Machine and then with Audioslave. As of 2019, Morello is a member of the supergroup Prophets of Rage.