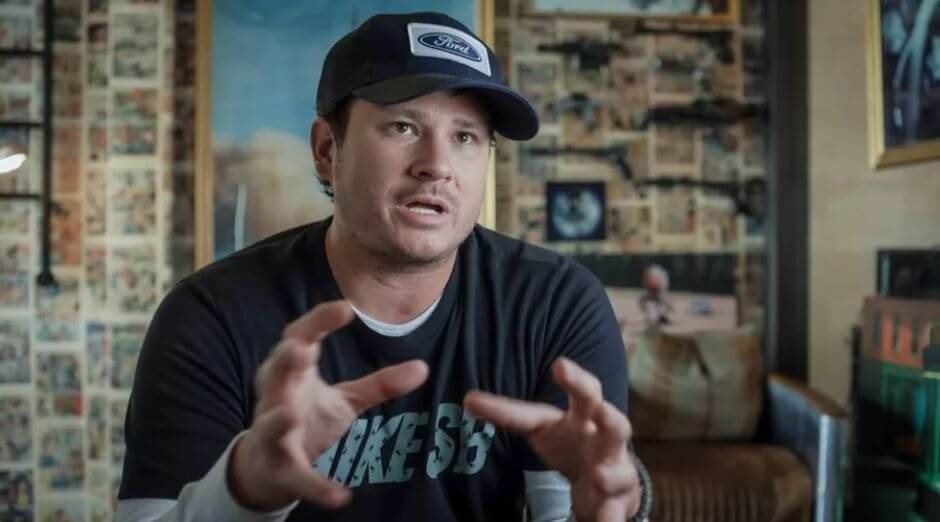 Ex-Blink 182 bassist Tom DeLonge is known for the last few years to be a UFO enthusiastic. He even created the To the Stars Academy of Arts & Sciences to do researches about it. The musician talked about Aliens, parallel reality and the universe in an recent interview with Alternative Press.

“I have a very good reason to believe that advanced intelligent races are not just going from point A to point B.

“They’re not just coming. Not all of them are just coming from a planet to our planet, that there are two opposite universes. And this is where we are and where both can exist, and using frequency we can hop back and forth. But in that other universe, time runs backward, and physics is opposite. A lot of people tend to think that alien means one thing.

“I always tell people, ‘If you’re in the ocean and you’re a fish, and you see a jellyfish come by, and you’re like, ‘Whoah, OK, this place is full of that lifeform,’ and then a dolphin comes by, ‘Wait, OK, that too,’ and then the whale, and then the next thing you know, like, a can of Coke, pollution, and you have no idea that there’s even land up above the ocean out there with all these humans throwing trash in the ocean.’

“So I think when people think about aliens they think the same thing; so like, ‘OK, what are they like? The dolphin? The Coke can?’ It’s teeming with life, and there’s so much more to it. I tend to think that what people most commonly think of when they think of aliens, they think of you know, the big-headed, big, black eyes that you see on the T-shirt stuff.

“And I think that if you’re gonna compare the legend of those clones, you might want to look at some of the biggest pieces of art that have ever come out in humanity: ‘Star Wars,’ ‘Lord of the Rings,’ you know, even all the ‘Avengers’ movies are dealing with free-willed human beings taking on a clone army, and I think that’s something that people need to think about.”

“A lot of people wonder why I’m so into the idea of the UFO phenomenon. Why I’m working with all these people at the Central Intelligence Agency, and so on, and why am I so passionate about this weird little sci-fi kind of thing.

“Well, the reason is, it is super-cool, it is super-fascinating, it is scary as hell. I’ve lost a lot of sleep over certain things I know, but the reality of the whole thing that I’m doing is because for decades now, I’ve noticed that the world, there’s something wrong with the world.

“And obviously, right now with what’s going on, it’s so apparent in our country, if not the world, just the idea, the segregation of classes and races. People are treated differently because of the way they look or where they come from. The class difference and money in neighborhoods, you know. All these things, and that’s why I got into the study of the whole UFO thing – because I’d go, ‘This is weird.’

“I feel like everyone wants the same thing. But there’s some weird reason why we’re all pitted against each other and why we can’t sort it out. I came to the conclusion that when you study the UFO thing, you will at some point get forced to dive into ancient religious texts and kind of historical paths of human behavior and humanity. And then it kind of gets you into now with what the governments of the world know and what they’re hiding from each other.

“And it’s all connected, they’re all branches of the same tree that the universe is teeming with life, and their influence on this planet over thousands of years has led us to this point, and it might not be for good reason, it might be for the self-interest of other players that are competing amongst themselves, and that’s kind of the way I view this.

“If the universe is as big as we all know it to be and it’s full of so many things. And it’s full of dimensional realities that we don’t totally understand yet. Then there stands a great chance that their influence on us is no different than our influence on small tribes as we were growing as a country.

“The British empire would show up at some little Pacific islands or something and set up shop, try to govern them, kind of want their money, want their resources. But they come back to create a war, burn them to the ground. And then Spain would come in and do the same thing. So now you got Britain and you’re having Spain, and they’re having kind of a proxy war, and all that happens, it’s no different to what happened to Syria.

“Syria is basically a mess because Russia and the United States are having a proxy war there, but if you’re on the ground in Syria, you just see something fly over your head, don’t know if it’s a jet… ‘What is that? I heard I noise.’ They see the economy going up and down. An explosion over here, this person dies, this person gets kidnapped. But overall, you’re just kind of living your life and kind of go, ‘Why am I in such a mess?’

“That’s why I got into all this. It’s because I think that once the world realizes and knows what the US government and other governments know about this, we’re all going to stop and look at each other and go, ‘Oh my god, we’ve been had, we’ve been duped. We’ve been influenced to be exactly this right now because we are not as strong when we’re not together. And we’re really serving the purposes of someone else’s agenda.’

“Not a human thing, this could be way bigger. So my idea was if that’s the case. I think the idea of bringing this stuff out, having the conversation and having the capacity to look at each other and say, ‘What is this all about here on Earth?’

“We are very insignificant, we’re one little tiny speck of dust in the universe. We got to take care of each other, and we have to do it quick. I hope that people will follow along with an open mind. Because this is going to start to come out in a much bigger way. As I’ve been saying, and I’ve been telling people this for a few years now.

“So I’m looking for good things when it comes up. I’m looking for people to kind of go, ‘Wow, this all makes a lot of sense,’ and we won’t know everything. But with what we do know, I think it will change the world. So that’s what I’m hoping for,” Tom DeLonge said.

Jake E. Lee reveals his impression when he first heard Metallica
Rob Trujillo talks about when he saw Ozzy Osbourne for the first time
To Top