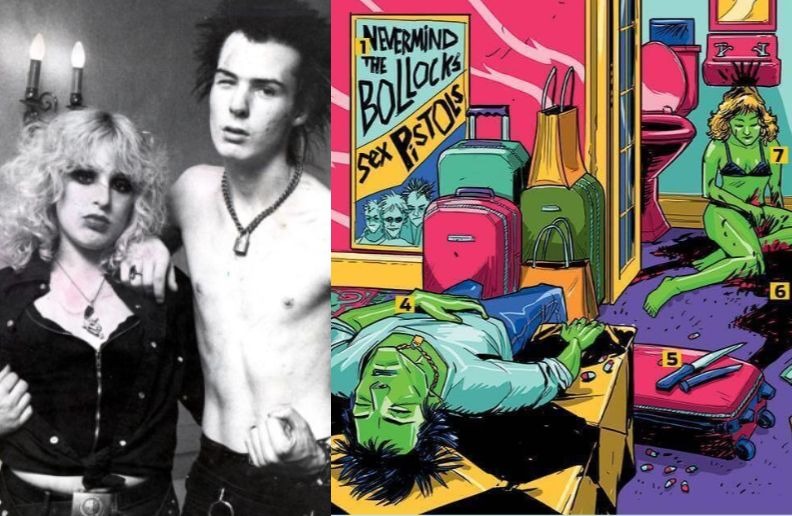 Sid Vicious (born Simon John Ritchie,10 May 1957 – 2 February 1979) was an English bassist and vocalist. He achieved fame as a member of the punk rock band the Sex Pistols, replacing Glen Matlock, who had fallen out of favour with the rest of the group.

More than 35 years after the crime, on October 12, 1978, there is still no certainty about who killed the groupie Nancy Spungen. For New York police, it was her boyfriend, former Sex Pistols bassist Sid Vicious. But the case is surrounded by mystery.

Since the Sex Pistols were over, in January 1978, Sid Vicious was living in New York with his girlfriend, Nancy Spungen – the two were together for a year. They lived in room 100 of the Chelsea Hotel, a cheap place that housed drug addicts, bohemians, fringes, and other not-so-noble figures.

Sid and Nancy were addicted to drugs, especially heroin. At the time of the crime, they were also consuming a lot of Tuinal, an antidepressant drug. The couple’s room was very frequented by friends of the two, who were also part of the punk scene. The pair had plenty of cash at the time – the result of Sid’s shows at Max’s Kansas City.

At dawn of her death, there was a party for about ten people. Witnesses say Sid was lying in bed, Tuinal doped, while Nancy made room for guests (the hospital report confirms that Sid had a high dose of the drug in his blood). The last guest in the apartment, according to witness, would have been the dealer who sold Tuinal to the couple.

No one knows exactly what happened when the two of them were alone in the hotel. The police report shows that Sid, still at the scene of the crime, made contradictory statements. First he said he did not know what happened and that he did not kill Nancy, because he spent the night sleeping. He then confessed to the murder saying that the two fought and that he stabbed her. Finally, he said it was an accident. In prison, he confessed again.

In one of his testimonials, the musician said he had woken up, gone to the bathroom and found Nancy still alive and breathing. After cleaning her blood, he had gone to a pharmacy to buy methadone, another drug he was addicted to. When he returned, Sid realized that Nancy was dead and called the police.

At 10:45 a police and ambulance arrived at the hotel. They discovered Nancy’s corpse in the bathroom, crouched by the sink. There was a knife close to the body – but it was not used in the crime, a Jaguar K-II, which was cleaned and left on a suitcase in the apartment. The cause of death was internal and external hemorrhage, caused by a stab in the abdomen. Sid was charged with second degree homicide.

Sid died of an overdose few months later, on February 2, 1979. Upon his death, the police closed Nancy’s case, considering him the murderer. But his “guilt” is questioned. Suspicious facts: 1) He was heavily drugged to kill, 2) key witnesses were not heard, 3) 6 fingerprints were found in the apartment, and 4) the lack of fingerprints on the murder weapon was not investigated (why would Sid clean the gun if he did not bother to hide the body?)

After Sid’s death, his mother found a note that read: “We [Nancy] had a death pact”

The documentary Who Killed Nancy, 2009, suggests that a man known as Michael, who was always at the hotel and was dealing drugs for the couple, would have been the killer. By attending the room, he knew the duo had lots of money. After the crime, though, there was no money in the room. What’s more, Michael would have reported Sid’s arrest to friends smiling. He was never found again.

The documentary theory: Michael tried to steal the apartment, was confronted by Nancy, killed her and then disappeared with the money.