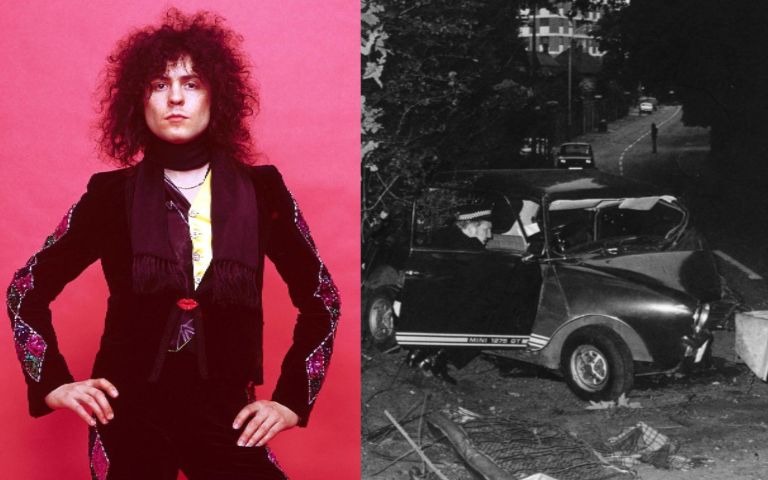 The legendary English T-Rex leader Marc Bolan helped to define Glam Rock in the 1970s. The passion for rock demonstrated by the young Mark Feld, his real name, frightened even his own parents. It began in the music listening without stop the compacts of Gene Vincent and Chuck Berry, two of its maximum idols. Shortly before that, when he was only nine years old, Bolan won his first guitar and set up a skiffle / parody band based on Lonnie Donegan (an icon of English music of the period).

Five years later, Marc was expelled from high school for aggressive behavior and his long locks. It is interesting to note that the star has also created a fascination for show business, starting as a child actor in the famous English TV series “Orlando”.

From there to being a full-time musician was a leap: he adopted the name of Marc Bowland and in 1965 he recorded a compact without the least repercussion – “The Wizard”.

Everything starts to change when he joins the Mod / Psychedelic group John’s Children. With them, he composed “Desdemona”, one of the hymns of the period, gloriously banished from the programming of the London BBC because it contains hallucinogenic themes.

With the end of John’s Children, Bolan met the American actor Riggs O’Hara and with him went to Paris, where he got in touch with a magician who gave him a lot of wisdom, as well as some concepts of black magic and tricks such as levitation , for example.

Trips aside, Bolan started to tread deeper into his compositions after his stay in Paris. Much of this material would take shape with Tyrannosaurus Rex, a Bolan duo alongside percussionist Steve Peregrine Took. The duo were born mostly of impromptu performances on the streets of London.

He died at the age of 29 in a car crash two weeks before his 30th birthday. In 1997, a memorial stone and bust of Bolan, Marc Bolan’s Rock Shrine, was unveiled at the site where he died in Barnes, London.

On 16 September 1977, Bolan was riding in a Mini 1275GT driven by Gloria Jones as they headed home from Mortons drinking club and restaurant in Berkeley Square. After she crossed a small humpback bridge near Gipsy Lane on Queens Ride, Barnes, southwest London, the car struck a fence post and then a tree.Bolan was killed instantly, while Jones suffered a broken arm and broken jaw.

At Bolan’s funeral, attended by David Bowie, Rod Stewart, Tony Visconti, and Steve Harley, a swan-shaped floral tribute was displayed outside the service in recognition of his breakthrough hit single “Ride a White Swan”.

His funeral service was at the Golders Green Crematorium, a secular provision in north London, where his ashes were buried. The car crash site has subsequently become a shrine to his memory, where fans leave tributes beside the tree. In 2013, the shrine was featured on the BBC Four series Pagans and Pilgrims: Britain’s Holiest Places. The site, referred to as Marc Bolan’s Rock Shrine, is owned and maintained by the T. Rex Action Group.

Bolan never learned to drive, fearing a premature death. Despite this fear, cars or automotive components are at least mentioned in, if not the subject of, many of his songs. He also owned a number of vehicles, including a white 1960s Rolls-Royce that was loaned by his management to the band Hawkwind on the night of his death.