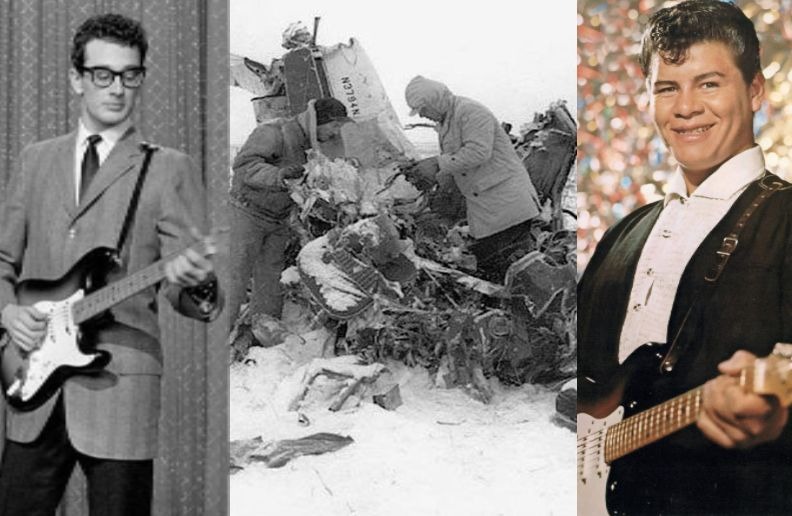 Buddy Holly, Richie Valens and Big Popper’s deeath was immortalized as “the day the the music died”, being even on the lyrics of the famous Don McLean song “American Pie”. The tragedy happened back in 1959 in Mason City, Iowa, just minutes after the takeoff of their airplane, their were heading to Moorehead, Minnesota. According to investigations, the cause of the crash was teh bad weather and a pilot mistake error. Holly chartered a plane to his band because of technical problems on their bus. On the day of the accident, a seat became vacant and Ritchie Valens won the “heads or tails” flipping the coin, securing his place on the plane. Buddy Holly died at the age of 22 when he was opening for names like Elvis Presley.

The musicians had a radio show and were touring internationally, playing hits such as “Peggy Sue,” “Oh, Boy!”, “Maybe Baby” and “Early in the Morning.” Holly wrote all of his songs and influenced artists like Bob Dylan and Paul McCartney.

Ritchie Valens died at the age of 17 and was already well-known for hits like “Come On, Lets Go,” “Donna” and “La Bamba.” Back in 1987, Valens’ life was portrayed in the film La Bamba. Valens was posthumously inducted into the Rock and Roll Hall of Fame back in 2001.

JP “The Big Bopper” Richardson died at the age of 28. He started out as a DJ in Texas and was later composing songs. His most famous song is “Chantilly Lace”.