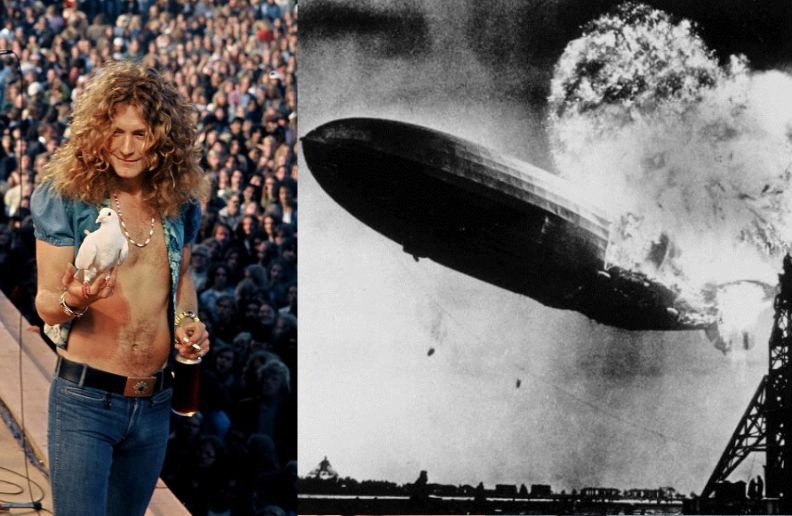 Maybe many people look at the cover of the first Led Zeppelin album and don’t  know that it is the record of a disaster that really happened.

On May 6, 1937, the LZ 129 Hindenburg, who had left Frankfurt in Germany, was preparing to land at the Naval Air Station in Lakehurst, New Jersey, United States. As it descended, the vehicle began to catch fire. 97 people were in the dirigible, being 36 passengers and 61 members of the team. 35 died (13 passengers and 22 professionals), as well as a worker who was preparing to receive everyone on the ground.

The tragedy was recorded in video and photos, but especially in audio, by radio broadcaster Herbert Morrison of WLS radio station in Chicago. The announcer was in New Jersey to record the moment and display the next day on his station. Despair is in his voice, but even so, he managed to push the cover forward, as if everything was being broadcast live.

The sentence “Oh, the humanity!” Pronounced by Herbert in the midst of his commotion became remarkable. The phrase was reused later in a satirical way in productions like Friends, The Simpsons, Wayne’s World and South Park, among several others.

The investigation into the cause of the explosion was inconclusive. Several hypotheses have been raised, but what was left of the concrete of the tragedy was the end of trips with large numbers of people in such vehicles. For Rock, the image of the happened became referential, still more for being directly connected to the debut of one of the greatest bands of all time.