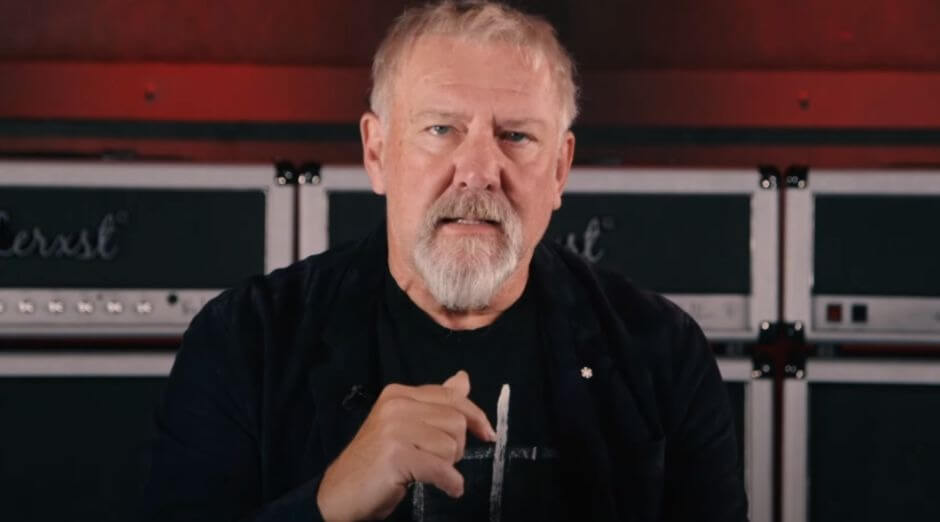 Rush is one of the greatest Rock and Roll bands of all time that gave many classic songs to fans over the decades. Back in 1996, guitarist Alex Lifeson revealed the secret behind 11 Rush songs of the band in an interview with Guitar World.

The secret behind 11 Rush songs revealed by Alex Lifeson:

“We were trying to be quite individual with Fly By Night, which was the first record that Neil [Peart, drums], Geddy [Lee, bass] and I did together. That song was the signature for that album. Coincidentally, the name of our record company, which is Anthem records in Canada, came from that song.”

“Neil was in an Ayn Rand [author of The Fountainhead] period, so he wrote the song about being very individual. We thought we were doing something that was different from everybody else. I was using a Gibson ES-335 then, and I had a Fender Twin and a Marshall 50-watt with a single 4×12 cabinet. An Echoplex was my only effect.”

“That was all recorded in one take. Because we were writing on the road, we used our soundchecks to run through songs that we were going to record. We would come off the road, have a few days off and start recording.”

“It was all recorded at the same time with all of us in the same room. We had baffles up around the guitar, bass and drums and we would look at each other for the cues. My solo in the middle section was overdubbed after we recorded the basic tracks. I played a solo while we did the first take and re-recorded it later. If you listen very carefully, you can hear the other solo ghosted in the background. That was a fun exercise in developing a lot of different sections in an instrumental. It gave everyone the chance to stretch out.”

“By that time I had my ES-355, and my acoustics were a Gibson Dove, J-55 and a B-45 12-string. I had my Marshall in the studio. I had the Twin and two Hiwatts, which I was also using live, but the Marshall was my real workhorse. The Boss Chorus unit had just come out at that time, but I think I used a Roland JC-120 for the chorus sound here. That was the first of many ‘chorus’ albums.”

“We started writing that song on the road. We wrote on the road quite often in those days. The Fountain of Lamneth, on Caress of Steel, was really our first full concept song and 2112 was an extension of that. That was a tough period for Rush because Caress of Steel didn’t do that well commercially, even though we were really happy with it.”

“We wanted to develop that style. Because there was so much negative feeling from the record company and our management was worried, we came back full force with 2112. There was a lot of passion and anger on that record. It was about one person standing up against everybody else.”

“I used the ES-335 again, and a Strat which I borrowed for the session. So I couldn’t afford one at the time. I used a Marshall 50-watt and the Fender Twin as well. I may have had a Hiwatt in the studio at that time, too, but I think it came a little later. My effects were a Maestro phase-shifter and a good old Echoplex. There were a limited number of effects available back then. The Echoplex and wah-wah were staples in those days,” Alex Lifeson said.

“The Spirit of Radio”

“There was a radio station here in Toronto – it’s an alternative station now – and ‘the spirit of radio’ was that station’s catch phrase. That song was about the freedom of music and how commercialized radio was becoming.”

“FM radio in the late ’60s and early ’70s was a bastion of free music where you got to hear a lot of things that you wouldn’t have heard otherwise. It was much like MTV was in the beginning, before it became another big network that feeds a large but very specific segment of the viewing audience. Radio has become a lot more commercialized since then. The station that we wrote that song about won’t play our music.”

“Limelight is about being under the microscopic scrutiny of the public, the need for privacy – trying to separate the two and not always being successful at it. Because we’ve never been a high-profile band, we’ve managed to retain a lot of our privacy. But we’ve had to work at it. Neil’s very militant about his privacy.”

“My guitar was a different modified Strat with a heavier and denser body. We set up a couple of amps outside of the studio as well as inside, so we got a nice long repeat with the echoing in the mountains.”

”The approach on that solo was to try to make it as fluid as possible. There was a lot of bending with lots of long delay repeats and reverb so notes falling off would overlap with notes coming up. I spent a fair amount of time on that to get the character, but once we locked in on the sound, it came easily,” Alex Lifeson said.

“Most of Signals was completed, but we wanted to add one more song. Neil had been fooling around with the lyrics, so we wrote and recorded New World Man in the studio all within one day. It has a very direct feel. Doing that in one day was a lot of fun. The pressure was on but off at the same time.”

“It was almost compulsory to do solos at that time, but I didn’t want to feel that every song had to have that kind of structure. I wanted to get away from that, and to this day I feel that way. So I enjoy playing solos and I feel that my soloing is quite unique to my style, but I’m bored with that structure. I used a Tele for the whole song through the Hiwatts with a little bit of reverb and chorus.”

“That was a tough one that took a long time to complete. It was recorded in Montserrat. The guitar was tuned up a whole step with the E string at F#, and I played a lot of open chords. I did a lot of drop-ins where I hit a chord and let it ring, then dropped in the next chord and let it ring and so on. When we started recording the song, it sounded too ordinary, so we tried dropping in those chords during the verses as an experiment.”

“I remember doing the solo in this studio in England, SARM East, which is in the East End of London. We set aside a week for solos, last-minute vocals and mixing. The control room was tiny. There was barely enough room for me to turn my body around when I was playing. But I got a really great sound with the repeats and lots of reverb. I loved to be soaked in that kind of effect at the time.”

“I used a white modified Fender Strat that I called the ‘Hentor Sportscaster’. The name came from Peter Henderson, who co-produced Grace Under Pressure. The amp setup was a couple of Dean Markley 2×12 combos, two Marshall 2×12 combos, two Marshall 100-watt JCM 800 heads and two 4×12 cabinets. I also ran a direct signal. By that time I had a pretty comprehensive rack with two TC Electronic 2290s and a 1210 that I used for phasing, and I had a Roland DEP-5,” Alex Lifeson said.

“That was the year that I got the Signature guitars with single-coil active pickups. It’s very apparent on that song. The guitar has a clear, metallic sound to it that really sings. I got into that bright tone, and my sound was still very chorusy. So I had gotten rid of all my Hiwatts and the Dean Markleys and was using primarily Marshalls again. I used 2×12 combos as well as the JCM800,” Alex Lifeson said.

“By then we were working with Rupert Hine as our producer. Oddly enough, I had been working on the basic ideas of that song at home and brought it to the studio when we started writing the record. We developed it from there. It was much heavier in the early version. The tempo had come up a little bit.”

”Rupert’s approach to the guitar sound was a little lighter than I wanted. That was partly my fault, because I was still using the Signature a lot, which didn’t lend itself to a very thick sound. That amp line-up stayed the same as before, and effects would come and go. I was fiddling around with whatever was new at the time, as I’ve always done.”

“We’d taken a seven-month break, which at that time had been our longest hiatus. We needed to clear the cobwebs and get away. We came into Presto feeling a lot more enthusiastic about working. The change to Atlantic Records was good because we felt like we needed a change all around. We were going into the ’90s, and it made everything fresher,” Alex Lifeson said.

“We had gone back to working with Peter Collins, who produced Hold Your Fire. We used a much more direct approach to recording, moving back towards the essence of what Rush was about as a three-piece. In retrospect, Counterparts didn’t work as well as we’d hoped, but it led us in the right direction. We’re much more satisfied with Test For Echo, which we view as a progression from Presto,” Alex Lifeson said.

“There’s a lot of different stuff on there. I tuned the entire guitar down a whole step to a D standard tuning. I got a new Les Paul Custom with beautiful sustain, a heavy tone and a compact. But not too small, sound. In the choruses I used a Godin Acousti-Caster, which has a really interesting sound that is at the same time almost acoustic but definitely electric.”

”I used a DigiTech 2101 to knit everything together. The important thing with that is to use it through a good speaker simulator, like the Palmer. The compensated outputs on the 2101 don’t quite do it for me, but through the Palmer it has nice body and width.”

“I feel like we’ve arrived with this record. There’s a particular feel that I don’t think we’ve had before, a nice groove and a lot of really good Rush songs. I feel like we were all really together on this album. Although we strive for that all the time, it’s not always achievable. The mood was so good in the studio, and we were so unified in direction,” Alex Lifeson said.