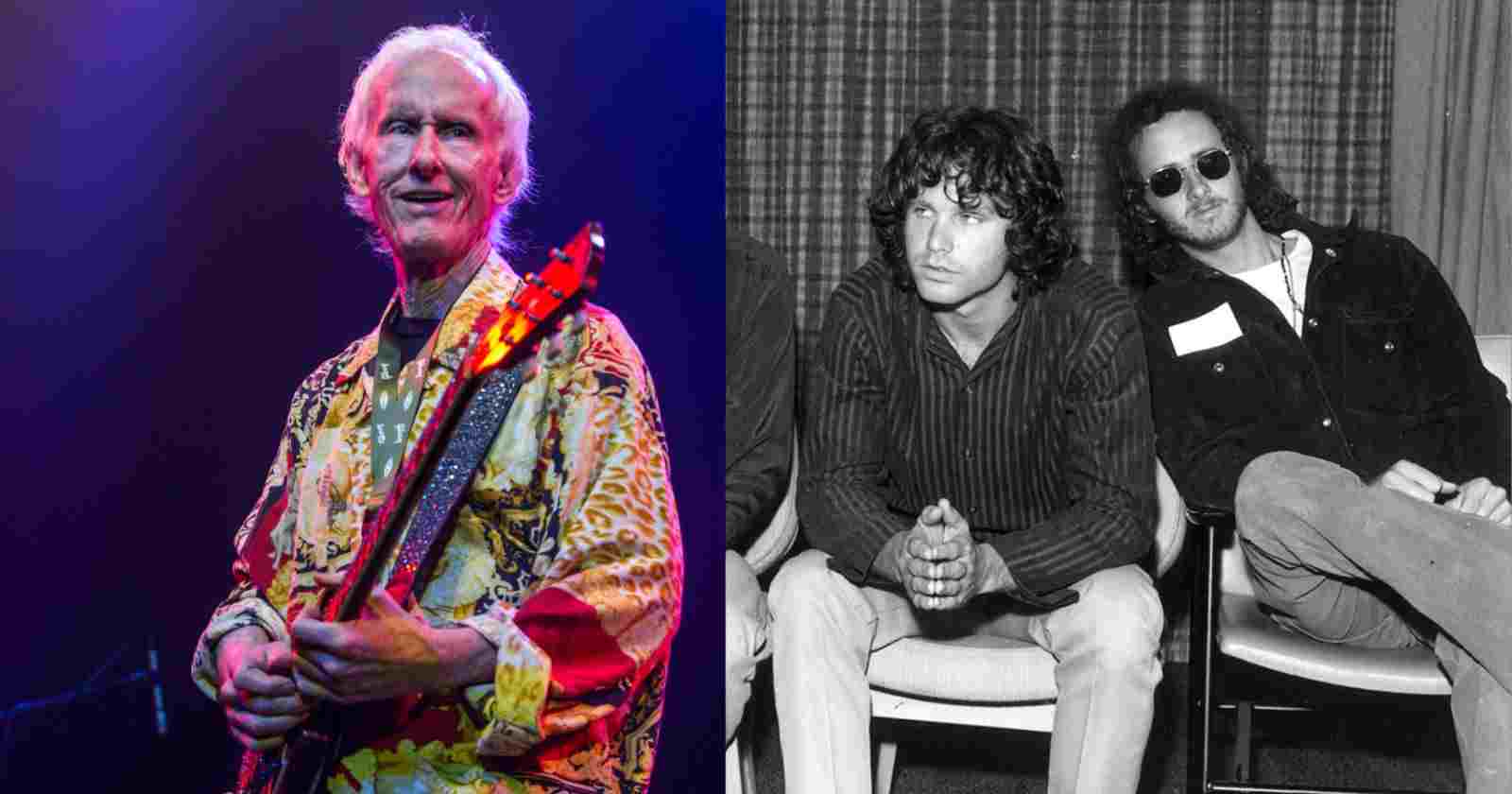 The Doors guitarist Robby Krieger made history creating many incredible songs with The Doors and elected in an interview with Guitar Player magazine back in 2020 the 5 most important songs of his career, explaining the reason why.

Robby Krieger (The Doors) elects the 5 most important songs of his career:

The Doors “Light My Fire”

“Jim was the songwriter, and he had about 12 songs written, but we were still playing things like ‘Gloria’ in the clubs. At one point he said, ‘Guys, we need more originals.”

“Why don’t you try writing some?’ So I said, ‘Okay. What should I write about?’ And he said, ‘Just write something timeless. Something that won’t go out of style next year.’”

“So I thought, What’s timeless? Earth, air, fire, water. I couldn’t go wrong with any of them. I picked fire because I liked the Stones song ‘Play with Fire.’

“Most of our tunes were three-chord songs: ‘Hello, I Love You,’ ‘Moonlight Drive’ — stuff like that. So I decided that I was going to write a song with a lot of chords. Nobody was doing that in rock and roll at the time.”

“I wanted to be different. It probably took me a couple of days or so before I showed what I had to the guys in the band. They really liked it, so we started playing it. We probably played it live in the clubs for about six months before we made the record.”

“At first, Ray was playing the same chords as I was at the start of the tune. Our producer, Paul Rothchild, said, ‘Hey, Ray, you do this Bach thing in the middle. Why not play that as an intro?’ It wasn’t like in the [1991] Doors movie, where we all went to the beach and Ray came up with the part.”

“For the solos Ray and I play, we started out with four bars each, but it got longer and longer. Live, we used to stretch it out to an hour. Of course, I improvised each time I played it.”

“We wanted to do a blues song. I had this lick that I was playing, and Jim looked at me and said, ‘That thing you’re doing — keep doing that.’ People ask me, ‘How did you come up with that riff?’ It was really pretty simple. Most of the best riffs are, I think. We weren’t even going to record it at the time.”

“So we were doing ‘Queen of the Highway’ and it was taking forever. We did 50 takes or something. So Jim said, ‘C’mon, let’s do something else. Let’s do “Roadhouse Blues.”’

“The guy who was playing bass with us [Ray Neapolitan] couldn’t make it to the session, and we needed somebody quick. As it turned out, Lonnie Mack was working at the studio as a clean-up guy. He had quit music and was selling Bibles and stuff.”

“I asked him, ‘Hey, Lonnie, can you play bass?’ He went, ‘Yeah, I could probably do that.’ It was all very casual. He came up with the coolest bass line anybody could have. It was easy as pie.”

“I used my SG and a Fender Twin Reverb. Paul Rothchild tried a bunch of different mics, as he always did. I improvised the solo. There’s that bit at the beginning where Jim goes, ‘Do it, Robby! Do it!’

“He was trying to get me psyched up. Lonnie Mack used to tell people that Jim was really saying, ‘Do it, Lonnie! Do it!’ I think he really believed that.”

“This song has always been a favorite of mine. Usually, Jim would write words, and then either Ray or I would put music to them. But in this case, we were just screwing around in our little rehearsal space.”

“That was also where we were recording, and that gave us a lot of freedom to experiment and try things out. We didn’t have to pay crazy studio costs. We could just roll tape. Before you knew it, we were jamming on something pretty good.”

“I think Jim’s words were also off the cuff. Sometimes jams don’t produce much in the way of songs. This one did.”

“During the verses, I do these little answer lines to Jim’s vocals. That was just a natural thing he and I would do. He’d sing something and I’d respond. I always liked an improv approach to that kind of thing. All in all, I think we got the whole thing down in one day.”

“Some songs we labored over; this one was quick. Maybe we came in the next day and did it again. I ripped through the solo. I was using an SG through a Twin, but it wasn’t the SG I played on the first albums. That one got stolen. The one I used on ‘L.A. Woman’ was black and had three pickups. I think it lasted about a year.”

“Paul Rothchild didn’t work on the L.A. Woman album. He was very much in demand as a producer by that point, and in his mind the Doors were on their way down.”

“And he was also very concerned about how wacky Jim was getting. He was afraid that Jim would follow Janis [Joplin], whom he had just produced. And he was right. [Rothchild produced Pearl, Joplin’s final, posthumously released solo album.]”

Solo career “What Was That?”

“A lot of my new songs came about in a way similar to ‘L.A. Woman.’ I’ve been playing with my old bassist buddy Arthur Barrow and a bunch of other guys: Tommy Mars on keyboards, and a couple of drummers — Chad Wackerman and Joel Taylor. And there’s a great sax player, Larry Klimas.”

“Arthur has a studio, and we would always roll tape. I came up with a lick that starts off this song, and Larry came up with another idea. Everybody else joined in. It kind of reminds me of the band War.”

“I played an SG that I set up especially for slide. The action is way high. The amp was a Fender Blues DeVille.”

When I’m playing a solo, the sound is very important to me, because it will make me play a certain way. It’s got to be right. And if it’s not right, I just can’t do sh*t. Here I got a really cool sound, so it was a breeze to play well.

“I want a solo to sound like part of the song, not just like somebody noodling around. Some people think I write them out because they’re so memorable, and that’s a nice compliment. If something sounds memorable, I guess that’s the difference between being a really good guitar player and one that’s just technically good.”

“This is a Doors song that originally appeared on Waiting for the Sun. It was one of the deep cuts from that album. On most of my solo albums, I try to do at least one Doors song, but I do them differently. Arthur Barrow and I were talking about which one to do, and he said that he always liked this one.”

“He said, ‘Ray plays the most beautiful piano parts on that song.’ And it’s true. People always talk about Ray’s playing on ‘Light My Fire’ and ‘Riders on the Storm,’ but on ‘Yes, the River Knows’ he’s playing something that could be a stand-alone classical piece.”

“Arthur wrote the piano part note for note, and we got Tommy Mars to play it. And then we did an instrumental version where I played slide guitar to simulate the voice.”

“We also did parts of the vocal line on a fretless bass. I used different chords from the original under the solo, which I improvised. So I could have played the exact same solo as before, but I wanted to do something different.”

“I just can’t see redoing a song the same way as you once did it. Let’s face it: You’re never going to sound as good as the original, so you might as well take it somewhere new.”