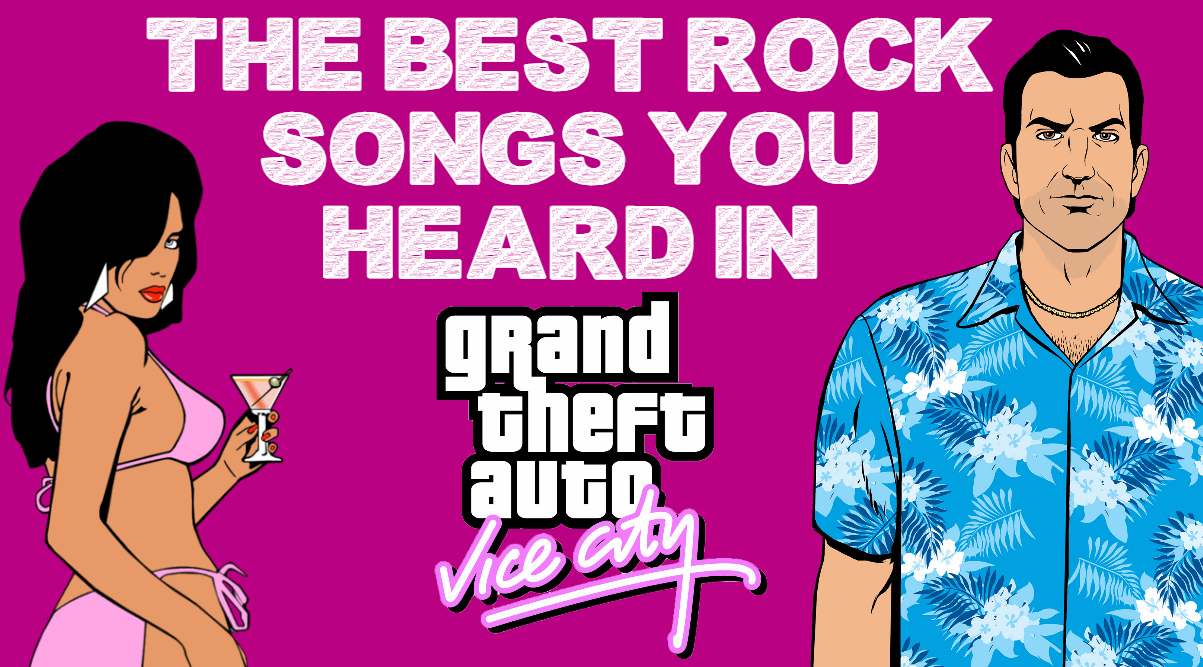 Grand Theft Auto: Vice City is one of the most remarkable games in history. Mixing many 80s references, like Scarface and Miami Vice, the game is a huge success among players since 2002, when he was released for PS2 and 2003 when was released for PC and XBOX.

Not only for the amazing graphics and possibilities that the game presented for that time, but also because of the great 80’s atmosphere that looked like Miami. 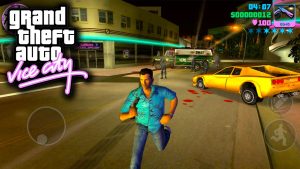 The game follows Tommy Vercetti following his release from prison. After he is caught up in an ambushed drug deal, he seeks out those responsible while building a criminal empire and seizing power from other criminal organizations in the city. And that history had an amazing soundtrack from 80s classics, from AOR to Thrash Metal.

So, here are some of the most remarkable song you had listen on GTA: Vice City

Foreigner’s power ballad was the second single released from the album 4 (1981) and was co-written by Lou Gramm and Mick Jones. It has become one of the band’s most successful songs worldwide, peaking at number 2 on the Billboard Hot 100 and number 1 on Billboard’s Rock Tracks chart

On the Billboard Adult Contemporary chart, the song reached the top five. The song peaked at number 8 on the UK Singles Chart.

Squeeze singer and guitarist Chris Difford wrote the lyrics to this song. He explains: “Tempted was written in a cab on the way to Heathrow, I just wrote down what I saw and how I felt as we wormed our way through the traffic. I also must have anticipated a good time on tour as the chorus suggests.”

Paul Carrack sang lead on this. He also sang with the bands Ace (“How Long”) and Mike And The Mechanics (“The Living Years”).

In 1987, he had a solo hit with “Don’t Shed a Tear.” Carrack was with Squeeze for their East Side Story album, replacing Jools Holland on keyboards and also contributing vocals. He rejoined Squeeze in 1993 for their album Some Fantastic Place, and sang on a new version of “Tempted” that the band recorded for the soundtrack of the 1994 movie Reality Bites.

“(I Just) Died in Your Arms” by Cutting Crew

The song was released as the lead single from their debut studio album, Broadcast (1986). It was first released on 25 July 1986 in the United Kingdom, and then released to the United States on 1 January 1987. The song was written by frontman Nick Van Eede, produced by Terry Brown, John Jansen and the band, and mixed at Utopia Studios in London by Tim Palmer.

The power ballad was the band’s biggest hit, peaking at number-one in the United States, Canada and Finland, and reaching the top five in the UK, South Africa, Sweden and Switzerland.

“More Than This” by Roxy Music

Written by lead singer Bryan Ferry, this song is about a love affair that fell apart. Asked in 2014 by Entertainment Weekly why the song endures, Ferry replied, “For some reason, there’s something in the combination of the melody and the lyric that works for people.”

Avalon was Roxy Music’s last album and their biggest seller. The band started out as more of a glam rock outfit, but they later turned to melancholy pop, with this song being the apotheosis of that sound. Brian Ferry embarked on a successful solo career, but remained far more successful in the UK, where his 1985 album Boys and Girls went to #1.

The song was released in September 1985 as the lead single from their second album Welcome to the Real World. The song peaked at number one on the Billboard Hot 100 in December 1985, where it remained for two weeks.

It was released as the band was just about to embark on a US tour opening for Tina Turner. The song peaked at number four in the United Kingdom, the highest chart position the group ever achieved in Britain. “Broken Wings” became the first of two consecutive number ones of the band on the American charts, the other chart-topper being “Kyrie”.

Night Ranger’s drummer, Kelly Keagy, wrote this song about his sister Christy, who is 10 years younger than him and was growing up fast. Essentially the song is about her coming of age. The vocalist on most Night Ranger songs was Jack Blades, but Keagy sang lead on this one, singing from his drum kit at shows.

The original title was “Sister Christy,” but the rest of the band thought Keagy was singing “Sister Christian,” so that became the title.

The song appears on their 1983 album Secret Messages. It was also featured on their compilation albums Afterglow (with a slightly longer intro) and Flashback. The single did not do very well in the US, spending only 2 weeks on the Billboard Hot 100 chart and peaking at number 86. It also charted low in the UK peaking at number 84.

The song refers to the search made by the singer for his cheating lover who emotionally conned him out of a ring which had ‘four little diamonds’ set into it. There was also a UK 12 inch JET 3 Track version with “The Bouncer” on the B-side.

“Owner of a Lonely Heart” by Yes

The song describes the paradox of loneliness. Once you’ve been hurt, loneliness is better than a broken heart.

This is the first single from 90125, and was the group’s one and only #1 charting hit. The album was a drastic departure from Yes’ progressive sound in the ’70s, containing distorted guitar and synthesizers that were popular at the time.

With help from MTV, Yes suddenly found a new audience, who were sometimes shocked to learn that much of their back catalog consisted of complex pieces that would often run well over 10 minutes.

“Your Love” by The Outfield

With a distinctive guitar riff and an unforgettable opening line, “Your Love” became one of the most memorable hits of the ’80s.

Formed in Manchester, England and signed to Columbia Records as “The Baseball Boys,” the group changed their name to The Outfield and released their debut album Play Deep in 1985. Like all of their original songs, “Your Love” was written by the band’s guitarist, John Spinks, who died of liver cancer in 2014 at age 60.

“Too Young to Fall in Love” by Mötley Crüe

Mick Mars stated that this song was about a young girl of about 14 that was living on the streets when a pimp picked her up and tried to fix her up to be employed as a prostitute.

An accompanying music video was released with the single. The video concerns the members of the band coming together to rescue a young Asian woman from the clutches of what appears to be an Emperor-like figure.

Interspersed with footage of the band performing the song, the video also contains a fight scene where the band members fight the ninja/samurai guards of the Emperor. However, it is then revealed that the young woman has willingly submitted to being a servant to the Emperor, prompting the band members to leave, shaking their heads in disbelief and disgust.

This song is a glam rock classic composed by Slade. But, most Americans know this song from the Quiet Riot cover, which went to #5 in 1983 and helped their album Metal Health become the first metal album to hit #1 on the Billboard 200.

It was the band’s producer, Spencer Proffer, who asked them to cover the song; lead singer Kevin DuBrow wanted nothing to do with it, since he wanted the band to write every song on the album. He and the band cooked up a plan to sabotage the song, but it failed.

“Bark At The Moon” by Ozzy Osbourne

Bark at the Moon was the first studio album Ozzy released without lead guitarist Randy Rhoads, who died in a plane crash the year before while the band was touring in Florida. Jake E. Lee took over on guitar.

Lee and bass player Bob Daisley wrote the song with Ozzy, but weren’t credited as part of an agreement they made with Osbourne’s record company. The album lists Ozzy as the solo composer to all the songs, which far from true.

This song is about a Werewolf who comes back from the dead and seeks revenge. Horror archetypes are a consistent source of lyrical inspiration for Ozzy.

“Working for the Weekend” by Loverboy

The song was written by Loverboy guitarist Paul Dean, drummer Matt Frenette, and lead singer Mike Reno. In our interview with Paul Dean, he explained the song’s origin: “That one was originally, ‘Everybody’s Waiting for the Weekend.’ I was walking down close to where I was living. It was a Wednesday afternoon, beautiful afternoon, and I’m walking in this heavily populated area, and it was deserted.

“Everybody was at work. And me being the musician, I’m out working and my work is, okay, what am I going to do for inspiration and where can I find it? So I’m out on the beach and wondering, ‘Where is everybody? Well, I guess they’re all waiting for the weekend.”

Alcatrazz got some airplay with the videos for their songs “Hiroshima Mon Amour” and “Island In The Sun,” but nothing like what their photogenic New Wave counterparts were getting. Lead singer Graham Bonnet was watching a Duran Duran video one day when it struck him that a good video could compensate for a terrible song.

“It was a gift that video came along and made these great videos of nice looking women in exotic places, but the song wasn’t that good, and that’s basically what it’s about,” he told us. “It’s like ‘Video Killed The Radio Star,’ if you remember that song. It was my sort of version of that, just saying, ‘Well, if you’ve got a great video, doesn’t matter what the song’s like. It’ll help you a helluva lot.'”

“Turn Up the Radio” by Autograph

This was the only hit for Autograph. The band members were music veterans, but had been together only a few months when they got a huge gig opening for Van Halen on their 1984 tour.

David Lee Roth would jog with Autograph drummer Keni Richards, and invited them on the tour after hearing their demo tape. “Turn Up The Radio,” with it’s anthemic chorus and quotable lyric “Things go better with rock,” was their only hit; the band released two more albums and broke up in 1989. A few years ago they reformed the band, but not with all the members (check it out here).

“You Got Another Thing Comin'” by Judas Priest

The song was originally released on their 1982 album Screaming for Vengeance and released as a single later that year. In May 2006, VH1 ranked it fifth on their list of the 40 Greatest Metal Songs It became one of Judas Priest’s signature songs along with “Electric Eye” and “Breaking the Law”, and a staple of the band’s live performances.

“You’ve Got Another Thing Comin” was first performed on the opening concert of the Vengeance World Tour at the Stabler Center in Bethlehem, Pennsylvania, on 26 August 1982 and had been played a total of 673 times through the 2012 Epitaph Tour.

The song reached No. 67 on the Billboard Hot 100 charts, making it Judas Priest’s only charting song in the United States. The song is written in the key of F-sharp minor.