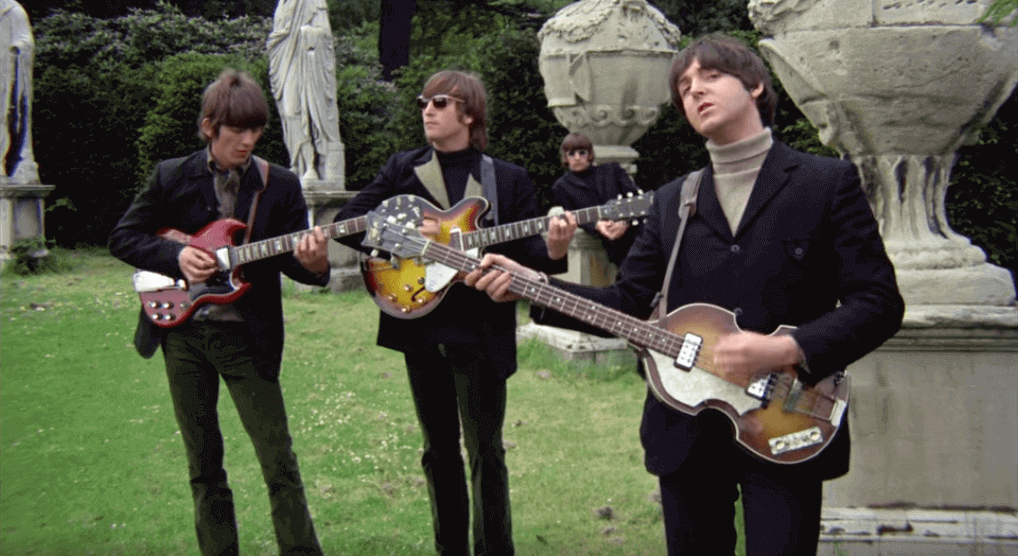 The Beatles Youtube channel just released eight restored videos from classics of the band. Below, you can watch Yellow Submarine, Yesterday, Rain, Lady Madonna, Something, Paperback Writer and The Ballad of John and Yoko.

“Yellow Submarine” by The Beatles

“Yellow Submarine” was made in 1966, written by Paul McCartney and John Lennon and sung by Ringo Starr. The tune was was included on the Revolver (1966) album and issued as a single, with “Eleanor Rigby”. The single went to number one on every major British chart, remained at number one for four weeks, and charted for 13 weeks.

From the success it became the title song of the animated United Artists film, also called Yellow Submarine (1968), and the soundtrack album to the film, released as part of the Beatles’ music catalogue. Although intended as a nonsense song for children, “Yellow Submarine” received various social and political interpretations at the time.

“Yesterday” by The Beatles

“Yesterday” was written and sung by Paul McCartney (credited to Lennon–McCartney). The tune was first released on the album Help! in the United Kingdom in August 1965. It consists in McCartney’s vocal and acoustic guitar, together with a string quartet, essentially made for the first solo performance of the band.

The song remains popular today with more than 2,200 cover versions and is one of the most covered songs in the history of recorded music. The track was also voted as the best song of the 20th century in a 1999 BBC Radio 2 poll of music experts and listeners and was also voted the No. 1 pop song of all time by MTV and Rolling Stone magazine the following year.

“Rain” by The Beatles

“Rain” was first released in May 1966 as the B-side of the “Paperback Writer” single. Both songs were recorded during the sessions for the album Revolver although neither appeared on that album.

The tune was written by John Lennon “Rain” has been called the Beatles’ finest B-side, that is noted for its slowed-down rhythm track and backwards vocals, both of which were a hint of things to come on Revolver, released two months later.

Three promotional films were made for the song “Rain”. These videos, along with other Beatles videos at the time, sparked George Harrison to say during the Beatles Anthology, “So I suppose, in a way, we invented MTV.”

“Paperback Writer” by The Beatles

“Paperback Writer” (1966) was Written by Paul McCartney and John Lennon and was released as the A-side of their eleventh single. The single went to the No. 1 spot in the United States, United Kingdom, Ireland, West Germany, Australia, New Zealand and Norway. On the US Billboard Hot 100, the song was at No. 1 for two non-consecutive weeks, being interrupted by Frank Sinatra’s “Strangers in the Night”.

And it was the last new song by the Beatles to be featured on their final tour in 1966.

“Lady Madonna” by The Beatles

The song was recorded in five takes and made its first album appearance on the 1970 collection Hey Jude. The recording began with three takes of the basic rhythm track, with McCartney on piano and Ringo Starr playing the drums with brushes.

“Something” by The Beatles

“Something” was written by George Harrison and released on the band’s 1969 album Abbey Road. It was also issued as a single coupled with another track from the album, “Come Together”.

The track was the first Harrison composition to appear as a Beatles A-side, and the only song written by him to top the US charts before the band’s break-up in April 1970. The single was also one of the first Beatles singles to contain tracks already available on an LP album.

The song drew high praise from the band’s primary songwriters, John Lennon and Paul McCartney; Lennon stated that “Something” was the best song on Abbey Road, while McCartney considered it the best song Harrison had written.

“The Ballad Of John And Yoko” by The Beatles

“The Ballad of John and Yoko” was written by John Lennon and attributed to Lennon–McCartney as was the custom, and released by the Beatles as a single in May 1969. The song, chronicling the events associated with Lennon’s marriage to Yoko Ono, was the Beatles’ 17th and final UK No. 1 single.

Authored by Lennon while on his honeymoon in Paris, it talks about the events of his marriage, in March 1969, to Ono, and their publicly held honeymoon activities, including their “Bed-In” at the Amsterdam Hilton Hotel and their demonstration of “bagism”.

Lennon brought the song to McCartney’s home on 14 April 1969, before recording it that evening. Recalling the controversy engendered by Lennon’s “more popular than Jesus” remark in 1966, McCartney was alarmed at the references to Christ in the new song but agreed to assist Lennon. Ono later said: “Paul knew that people were being nasty to John, and he just wanted to make it well for him. Paul has a very brotherly side to him.”