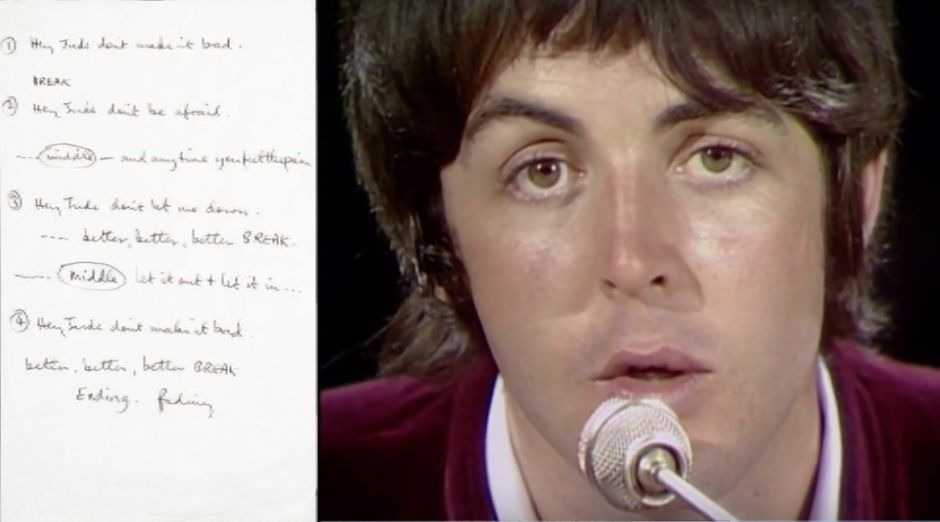 The manuscript of the classic “Hey Jude” by The Beatles was auctioned for $ 910,000. According to Billboard, the handwritten letter by Paul McCartney was the most expensive piece sold by Julien’s Auctions in a batch with more than 250 items linked to the Fab Four.

Among the items auctioned were a drumhead worn by Ringo Starr at a concert at Cow Palace. The BAGISM drawing by John Lennon and Yoko Ono, a script page for the Hello Goodbye clip and the stage for the group’s first concert.

“Hey Jude” is a Beatles song composed by Paul McCartney, credited to the Lennon / McCartney duo. It was released on Side A of the 1968 single Hey Jude / Revolution. Despite the song’s long duration (more than seven minutes), was one of the Beatles’ best-selling singles. It was voted by Rolling Stone magazine as the 8th best song of all time.

The song was written in June 1968, when Paul McCartney went to visit Cynthia Lennon and her son Julian. After John’s interest in Yoko Ono and Cynthia’s request for divorce. After that, Paul as a friend of the ex-couple, felt that he needed to support her.

According to Paul in “The Beatles Anthology”:

“I thought that as a friend of the family I could go to their house and say that everything would be okay. Also, try to cheer them up and see how they were doing. I drove about an hour. I used to turn off the radio on those trips and humming. Seeing if I could write songs. So I started singing: ‘Hey Jules – don’t make it bad, take a sad song, and make it better …’. As a message of hope to Julian. ‘What’s up, your parents are getting divorced. I know you’re not happy. but you’ll be fine.’ Then I changed the name from Jules to Jude, who was a character in Oklahoma! and I liked the name.”

John Lennon later left his opinion about the song to be directed to his relationship with Yoko, as stated in the interview for Playboy magazine in 1980: “Paul said he wrote to Julian. He knew he was getting divorced and stopped living with Julian. He took care of Julian like an uncle, and wrote ‘Hey Jude.’ But I always thought it was a song aimed at me. If you think about it, I don’t want to be compared to those fans who read things in the songs … But the lyrics: ‘Hey, John … go out and get her.’ In his subconscious the little angel said, ‘Be blessed, leave me ‘but his little devil didn’t like it at all, because he didn’t especially want to lose his partner. ”