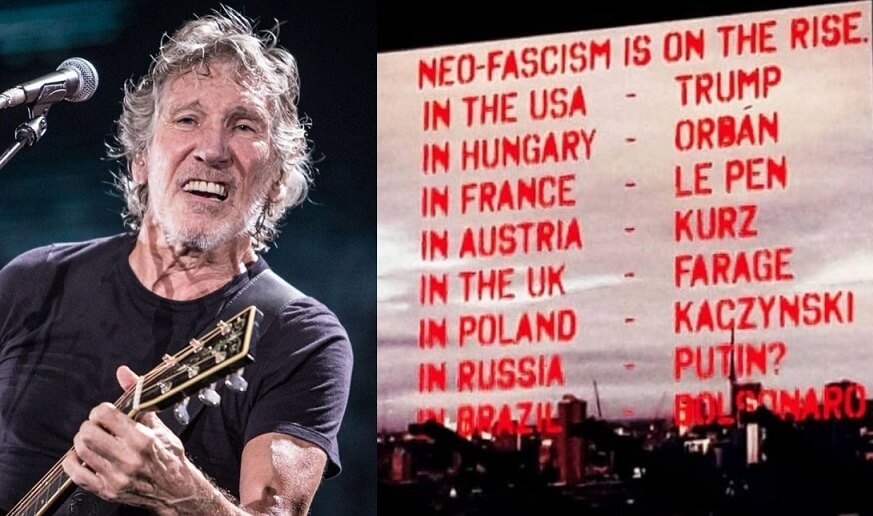 Roger Waters is with his Us+Them tour in Brazil, and the country is currently in the presidential election period. The candidates are Fernando Haddad (PT), the left-wing political candidate and Jair Bolsonaro (PSL), the right-wing conservative candidate, that have already made homophobic, racist, sexist declarations and supports the work of a famous torturer of the time when Brazil underwent a dictatorship.

Since Jair Bolsonaro is in front of the polls, Roger is criticizing the candidate the conservative candidate.  He is presenting a screen with the phrase “censored point of view” where it should be in the name of the PSL postulant in the Planalto Palace and provoking “no fucking way” in place of “#elenão” (that is the hashtag used against the candidate, that means “not him!”). Since the country is polarized in two sides, the audience gets divided with many supporting the singer and many criticizing.

Messages of protest on subjects ranging from anti-Semitism to awareness of the dangers of pollution are being displayed. Even Mark Zuckerberg, the creator of Facebook is being criticized.

Public demonstrations continued when the screen showed the phrase “resist neofascism,” then listed names of political leaders such as Vladimir Putin and Donald Trump and Jair Bolsonaro.

In another concert moment, Waters and crew returned to the stage with an even sharper political slant, both on setlist and projections. Dogs and Pigs (Three Different Ones) packed direct criticism of Donald Trump with displays of controversial statements by the US president on the big screen and interview audiences of the American. Before Money, came the words “Trump is a pig”.