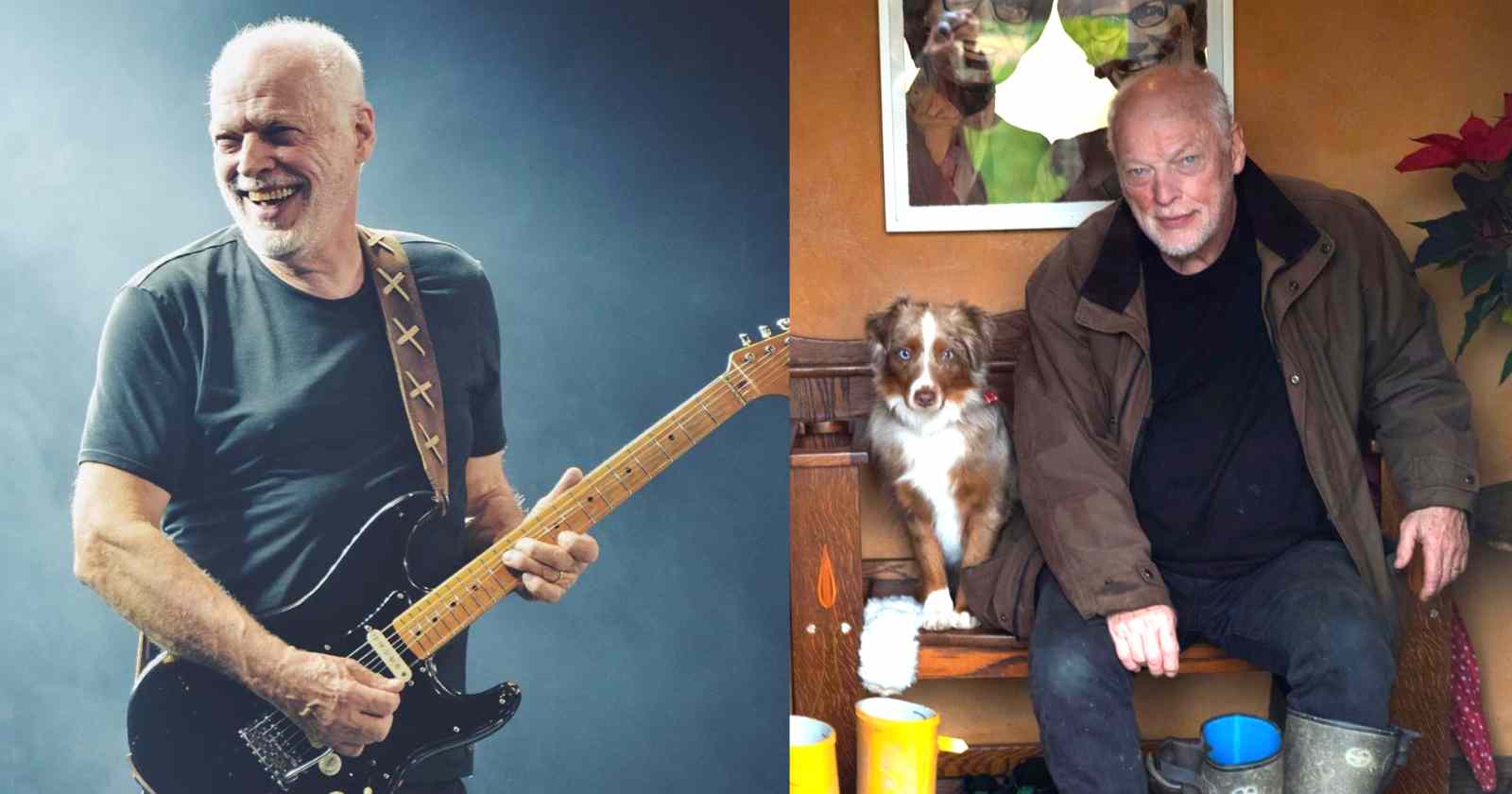 One of the most famous and praised guitarists of all time, Pink Floyd‘s David Gilmour helped to create countless songs that are favorites of millions of people around the world. In an interview with BBC Radio 2 show “Tracks Of My Years” back in 2006 (Transcribed by Rock and Roll Garage), he listed some of his favorite songs of all time and explained why they are so important for him.

“I love the Beach Boys. My early band in Cambridge when I was a teenager, we did a lot of Beach Boys songs. But I didn’t wanna play one of the the too surfy ones, I just love the place that Brian Wilson got to, (when he came out) of all that Surf Music. Some of these moments are just sublime. ‘God Only Knows’ is one of the best things. It’s so beautifully constructed and so meaningful as well,” David Gilmour said.

Formed in Hawthorne, California, United States back in 1961, The Beach Boys are one of the most important American bands of all time that sold more than 100 millions records worldwide, what makes them one of the best-selling bands in history. Their most famous album is “Pet Sounds” (1966), praised by many other famous musicians like The Beatles.

“Jimi Hendrix, fantastic. I went to a club in south Kensington in 1966 and this kid got on stage with Brian Auger and the Trinity and (started to play) the guitar with the other way around (upside down) and started playing. Myself and the whole place was with their jaws hanging open.”

“I went to the next day to record shops and I said ‘You’ve got anything by this guy Jimi Hendrix?’ and they said ‘Well, we’ve got a James Hendrix’. He hadn’t yet done anything, so I became rather an avid fan waiting for his first release. Also this is one of his beautiful ballads that I really love,” David Gilmour said.

One of the most influential guitarists of all time, Jimi Hendrix changed the way that Rock and Roll music treated the guitar sound in the late 60s and early 70s, inspiring countless musicians to experiment more and write heavier and psychedelic songs. He was inducted into the Rock and Roll Hall Of Fame by Neil Young back in 1992.

Kate Bush “The Man With The Child In His Eyes”

“I guess is reasonably well known that I am credited with discovering Kate Bush. So it’s a little more complicated than that. A friend of mine, (that was) friend of her brother arrived on my doorstep one day with rather squicky demos of her (that) I didn’t think that it wouldn’t be listened properly by the people that I know from the record company. So I thought that the best way for her was to make some fisinished recordings of her like album tracks. So I employed her, I went through all her demos and I’ve chosen three songs that she had written.”

“She was only 15 at the time and “The Man With The Child In His Eyes” was the song that (stood up) of all of them as being the best one. So I got this guy to arranged it and create a recording of it and other songs that would be then be good enough to take them to EMI. They signed up and the rest is history. So the actual recording that we just heard it’s actually the recording (from that session). It was never changed after we recorded,” David Gilmour said.

Born in Bexleyheath, England back in 1958, Kate Bush was the first British solo female artist to top the United Kingdom album charts and to enter the album chart at number 1. She has been nominated for three Grammy Awards and some of her most famous songs are “Wuthering Heights”, “Babooshka” and “Running Up That Hill”.

“Leadbelly, I loved him when I was very young, loved his 12-string guitar playing. I always enjoyed the 12-string. His story, he was in prison, he got released from prison on a murder charge because he was such a great singer.”

“But for me, ‘Rock Island Line’ was one of the first things I’ve learned. One of the things that you can you can actually learn one chord, get your fingers on that guitar in one position and not move from there, you can do the whole song and sing this old song to yourself. So it’s a great thing, part of my childhood,” David Gilmour said.

The oldest artist from the list made by David Gilmour, Lead Belly was born in Mooringsport, Louisiana, United States back in 1888 and is remembered for his strong vocals, talent on the 12-string guitar and for the folk standards he recorded.

The Beatles “You’ve Got To Hide Your Love Away”

“I was an absolute mad Beatles fan. ‘You’ve Got To Hide Your Love Away’ is I think, John Lennon‘s first moment of being influenced by Bob Dylan. It’s very much on the Bob Dylan vein. So it’s just one example of hundreds of things I could choose. Anything by The Beatles, really. Fantastic song,” David Gilmour said.

The most successful Rock band of all time, The Beatles changed Rock and Roll in the 60s, bringing a swinging sound and inspiring other musicians to compose their own songs and write their own lyrics. They were inducted into the Rock and Roll Hall Of Fame back in 1988 by Mick Jagger, who said in his speech: “The original way they crafted their songs wasn’t lost on us.”

Martha Reeves & The Vandellas “Dancing In The Street”

“You’ve got to put some from that era of Motown and Stax. All these great American labels that were in the middle 60s. I love that period of black American music, it’s just fantastic. Even I, (am) moved to move my feet to something like this (Laughs),” David Gilmour said.

Formed in Detroit, Michigan back in the 50s, Martha Reeves & The Vandellas charted over 26 hits like “Nowhere To Run”, “Love Is Like A Heat Wave” and “Jimmy Mack”.

“I don’t think you can’t get a more perfect Pop song than ‘Waterloo Sunset’ and never even made number 1. I’ve seen a list of great number ones and I was looking for it and it wasn’t there, I realized. But it is probably the most perfect imagery, music and all tied together into that little moment of musical perfection. So I would love have written that song.”

One of the most important British bands that appeared in the 60s, The Kinks sold more than 50 million records worldwide. Some of their most famous songs are “Lola”, “You Really Got Me”, “All Day and All The Night” and “Sunny Afternoon,” David Gilmour said.

They were inducted into the Rock and Roll Hall Of Fame as a member of The Kinks back in 1990 by Graham Nash.

“We were on tour in America when this came out. There was all this thing about the Kent State University and the four kids who got killed there in the rioting, the demonstrations against the Vietnam war. So it’s just a great song. They were always fantastic with that added to a little bit of Neil Young strength with the whole thing with Crosby, Stills & Nash great voices. Still a big fan,” David Gilmour said.

Formed in Los Angeles, California back in 1968, the Folk Rock supergroup had the already successful musicians: David Crosby (The Byrds), Stephen Stills (Buffallo Springfield) and Graham Nash (The Hollies), later inviting Neil Young (Buffallo Springfield) who wasn’t constant member of the group over the decades, working the trio from time to time.

“‘Heartbreak Hotel’ as I said about ‘Waterloo Sunset’ is a perfect recording. It’s just so spare, so little going on but every nuance, every thing on it it’s absolutely affection. I got it when I was 10 years old in 1956. Also it was the second record I ever got. I’ve got it on a 78, I don’t know what ever happened to it.”

“My first record was ‘Rock Around The Clock’, my babysitter sat on it and it smashed. But I don’t know what happened to ‘Heartbreak Hotel’. It’s just that place and the piano, just magic. Elvis was great for a few years, but for me it lost all the sparkle. If you ever see any of the old black and white bits of film from him performing at that time, they are absolutely electrifying, which I don’t find in the Las Vegas ones,” David Gilmour said.

Nina Simone “I Put A Spell On You”

“Nina Simone is one of the true great originals. That recording of her of Screamin’ Jay Hawkins song it’s just magic. Brilliant sax solo. I heard it when I was living in Paris in 1966 or 67. So it’s just magic and she was a wild woman,” David Gilmour said.

Born in Tryon, North Carolina, United States back in 1933, Nina Simone is one of the most important singers of all time. Her music mixed Classical, Jazz, Blues, Folk R&B and Pop. Some of her most famous songs are “Feeling Good”, “My Baby Just Cares For Me” and “Baltimore”.