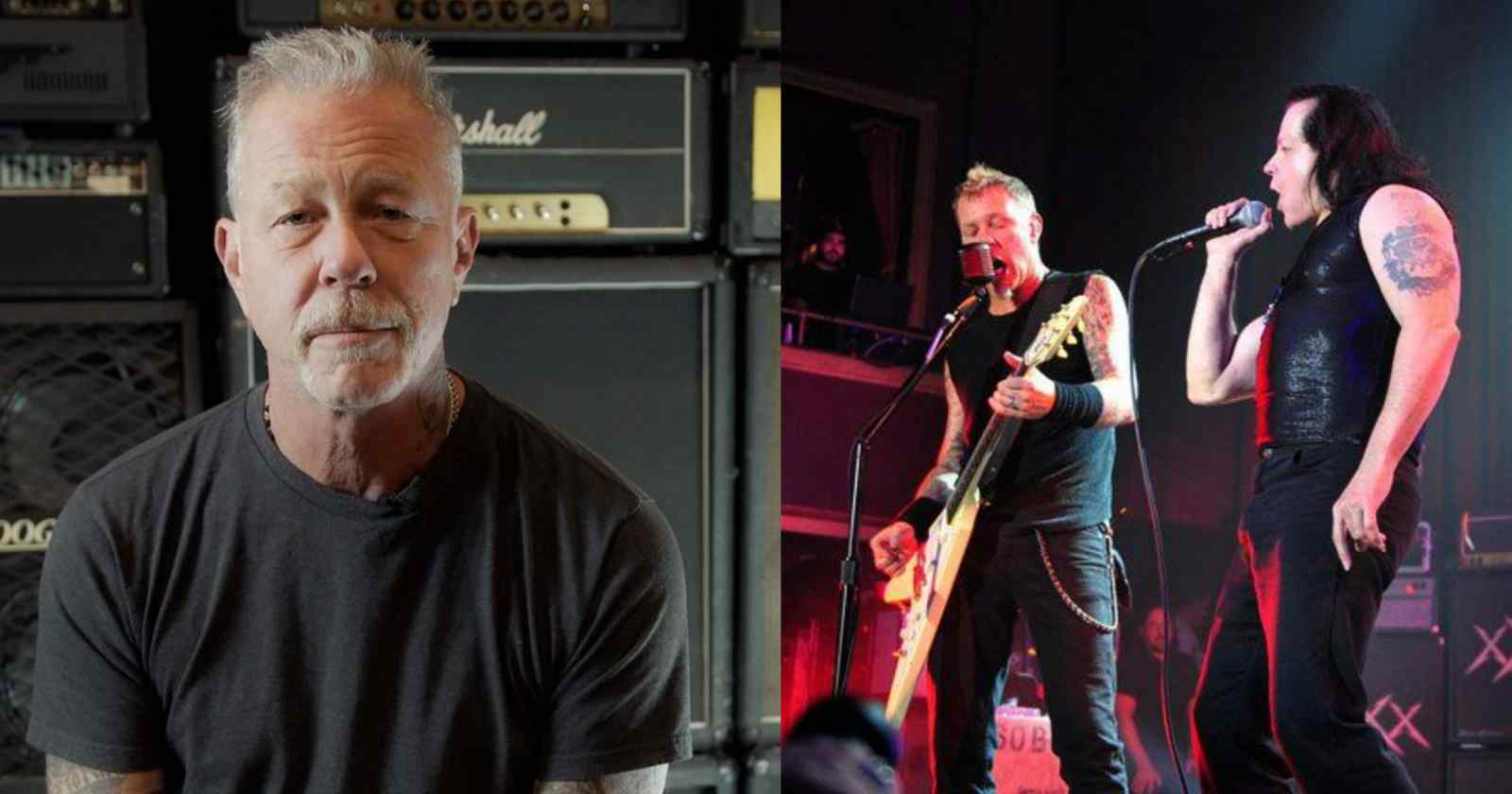 Metallica is the most successful Thrash Metal band of all time and helped to take Metal music to another level, especially in the 80s and early 90s. The music genre embraced by the group was inspired by the New Wave Of The British Heavy Metal, Speed Metal and Punk Rock. So besides Metal bands, the members of Metallica, especially the guitarist and singer James Hetfield were inspired many Punk bands.

To show more of his love for that kind of music, Rock and Roll Garage selected the 7 Punk bands that James Hetfield said he likes.

One of the most obvious Punk bands that Hetfield likes is certainly The Misfits. Metallica even covered the songs “Last Caress” and “Gren Hell” in 1987 for their EP “The $5.98 EP – Garage Days Re-Revisited” and also covered “Die, Die My Darling” in 1998. The three tracks were featured on Metallica’s 1998 covers album “Garage Inc.”

In 2011, Misfits original singer Glenn Danzig even joined them on stage at San Francisco’s Fillmore Auditorium for their 30th anniversary concert. He listed Glenn Danzig in position 8, on the list that he made of the best singers of all time for Rolling Stone in 2008.

Talking with Music Radar in 2009, Hetfield said that the Horror Punk band was one of his main influences when thinking about rhythm guitar.

“My rhythm gods are Tony Iommi, Rudolf Schenker and Malcolm Young. Guys who just keep it steady. The Misfits too. Even the Ramones with their simplicity. It’s all downpicking! Watch some footage of Johnny Ramone and you’ll go, ‘Wow!’” James Hetfield said.

Curiously, the person who introduced Hetfield and Kirk Hammett to Misfits’ music was the late Metallica bassist Cliff Burton. He even had a tattoo of the band’s mascot “The Crimson Ghost” on his arm.

As Hetfield said many times over the yeras, he also was heavily influenced by The Ramones. Especially by Johnny Ramone’s guitar playing, that he says is one of his main inspirations.

Johnny Ramone was the band’s co-founder and remained a constant member of the group alongside the vocalist Joey Ramone. They were one of the main groups that helped to shape Punk Rock as it became know over the years, especially the format of the tracks that were short and fast.

Talking with Howard Stern in 2020, Metallica credited Punk Rock for the band’s longevity, because they were never worried about everything being perfect all the time. During the same conversation Hetfield recalled that they had the chance to play with them at Lollapalooza and according to him it “was such a treat”.

Metallica covered the song “53rd & 3rd” for The Ramones 2003 tribute album “We’re A Happy Family: A Tribute to Ramones”. At the time they even performed the song live with the producer Bob Rock playing the bass guitar.

Another Punk band that Hetfield likes is Fear, band formed in Los Angeles back in 1977. They are often credited for being one of the groups that helped to shape the sound of the Californian Hardcore Punk.

Hetfield also listed the band’s only constant member of the decades, vocalist Lee Ving in the position number 18 on the list he made for Rolling Stone of the greatest singers in the history of music in his opinion in 2008.

The British Hardcore Punk band Discharge is another one from the music genre that Hetfield likes. The group was formed in 1977 in Stoke-on-Trent, England. They are known for influencing countless sub-genres of extreme music.

Hetfield told Little Punk People in 2017, that Discharge was one of his favorite bands outside the Big 4 of Thrash Metal music. He also listed the band’s classic vocalist Kevin “Cal” Morris in the position 17 on the list of the greatest singers of all time he made for Rolling Stone. Cal was the group’s frontman from 1977 to 1987, 1991 to 1995 and 2001 to 2003.

Their songs have been covered by some of the biggest names in heavy metal and other genres. One of them is Metallica, that covered the tracks “Free Speech For The Dumb” abd The More I See”. Both tracks were featured on their 1998 covers album “Garage Inc.”.

Another interesting fact about Discharge is that the musical sub-genre “D-beat” is named after them, because of the band’s distinctive drumbeat.

Another British Punk band that Hetfield likes is GBH, formed in 1978 in Birmingham, England. Talking with Little Punk People in 2017, he also said that the group was one of his favorite ones outside the Big 4 of Thrash Metal.

Curiously, James Hetfield revealed in the band’s official website that the title of the song “Spit Out The Bone” from Metallica’s 2016 album “Hardwired… To Self-Destruct” was taken from the G.B.H song “Passenger On The Menu”.

“Yeah, thank you GBH for the ‘Spit Out The Bone’ line. I know their song was a little different. Their song was about the Donner Party and cannibalism.”

“This is a little different. Just the wonder and fear of, again, what’s happening to man. Without future tripping too much, just the possibilities of ‘Terminator,’ stuff like that, you know. We’re wearing smartwatches. Things are getting closer and closer to just being in us.”

“Why would I not have the internet in my head all the time? Why do I have to worry with all these ’emotions’ and stuff? Falling in love and getting your heart broken? That doesn’t do anybody good. You know, the heart and blood? It’s in the way of efficiency! We could be a much more efficient race if we just allow computers to help us.”

“(So) yeah, they are helping us. But how far does that go? All of that craziness. So ‘Spit Out the Bone’ is that your bones aren’t needed. They break!” James Hetfield said.

G.B.H are considered one of the early pioneers of the British Street Punk. They also were a huge influence to other Thrash Metal bands like Exodus, Megadeth, Slayer and Anthrax. Since 1982 the group released 12 studio albums, the most recent one being from 2017.

The Hardcore Punk band Cro-Mags formed in 1981, in New York City, the same year that Metallica was also formed in Los Angeles, is another Punk group that Hetfield already said he admired. Talking with Steve Newton back in 1986, at the age of 23, the guitarist and singer talked about some bands that he liked and one of the ones he mentioned was Cro-Mags.

Since the early 80s, the group build a strong cult-following and released six studio albums. They are one of the most influential bands of Hardcore Punk. Also one of the first ones to mix Thrash Metal with the music genre they originally played.

Some of their most famous songs are “Hard Times”, “We Gotta Know”, “World Peace” and “Show You No Mercy”.

The band’s co-founder and bassist Harley Flanagan, who has been their only constant member since the formation of the group already talked about Metallica. He said in a conversation with With Guitars in 2020 that Thrash Metal bands wouldn’t sound the same without Hardcore Punk.

“Metallica, Slayer and all these other bands wouldn’t sound the way they sound if it wasn’t for Hardcore. It has influenced and affected music culture worldwide. That in itself, is something to be somewhat proud of,” Harley Flanagan said.

Another group that James Hetfield mentioned as one of his favorites in the conversation with Steve Newton back in 1986, was the British Hardcore Punk band English Dogs. They were formed in Grantham, England also in 1981, same year that Metallica started.

But it was only in 1984 that they released the debut album “Invansion Of The Porky Men”. One year after Metallica released their debut record. Until 2014 they have made 9 studio records. But nowadays, there are two versions of the group on the road.

There is the Punk and Metal crossover group that has original drummer Andrew “Pinch” Pinching and the classic members Graham “Gizz” Butt and Adie Bailey.

And there is the other version of the band that is punk-based and features only the original vocalist Pete “Wakey” Wakefield. Some of their most famous songs are “Survival Of The Fittest”, “Ambassador Of Fear”, “The Chase Is On”.