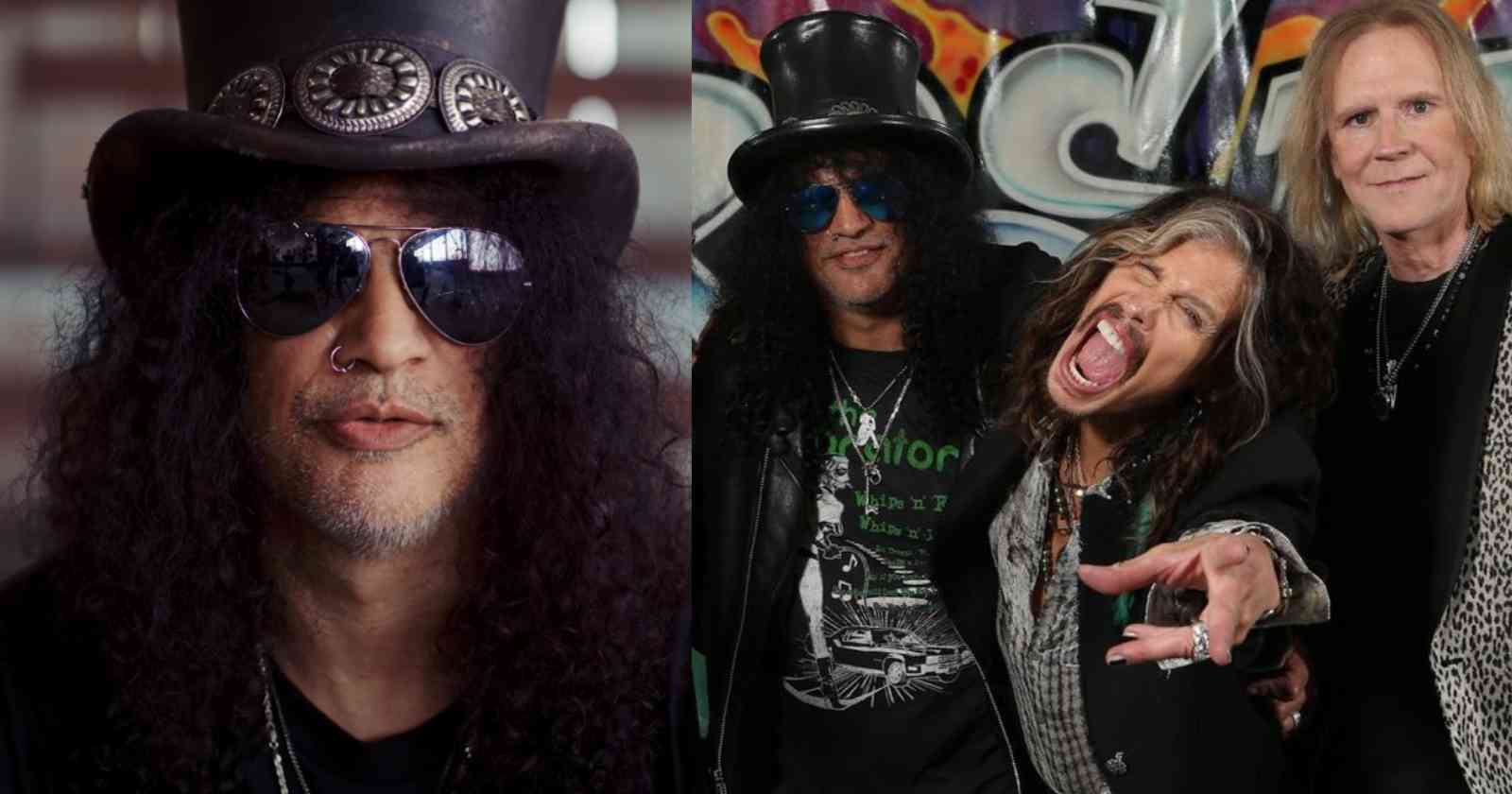 Live albums always gave fans a notion of how strong a Rock and Roll band sounded live in concert and it was a big inspiration for musicians over the decades, including Guns N’ Roses guitarist Slash. In an interview with Australian Guitar in 2022, the guitar player listed 7 live albums as some of his favorites of all time. Rock and Roll Garage recovered what the musician said about those artists over the years and his connection with them.

Slash was inducted into the Rock and Roll Hall Of Fame as a member of Guns N’ Roses back in 2012 by Green Day.

In the interview, Slash said that Aerosmith‘s “Live! Bootleg” is his favorite live album of all time. Released back in 1978, “Live! Bootleg” is an Aerosmith double live album with tracks like “Back In The Saddle”, “Sweet Emotion” and “Walk This Way”. As the name of the record suggests, it was meant to feel like it was a real bootleg, having design that seemed to be not well made and having hidden tracks on the album that weren’t listed on the album’s art.

Slash is a big Aerosmith fan and the group was one of his main inspirations. He already said that Aerosmith guitarists Joe Perry and Brad Whitford are some of his favorites of all time. In addition, Guns N’ Roses covered the Aerosmith song “Mama Kin’” on their second studio album “G N’ R Lies” (1988).

The Rolling Stones “Got Live If You Want It!” and “Get Yer Ya-Ya’s Out!”

Born in Hampstead, London back in 1965, Slash stayed in England until around the age of 5 and had his first connection to music hearing British bands like The Rolling Stones. In an interview with Classic Rock back in 2016, he talked about those first years, saying: “From day one it was all about the Stones, The Yardbirds, Cream and the Kinks. Also I have to bring The Moody Blues into it because they had quite a strange effect on me. But then when I moved to the States it was all about bands like The Doors,” Slash said.

“Got Live If You Want It!” was released in 1966 and it has live and studio recordings. Some of the most famous tracks are “Under My Thumb”, “Get Off of My Cloud” and “19th Nervous Breakdown”.

Released in 1970, “Get Yer Ya-Ya’s Out!” was their second live album and was recorded in Baltimore and New York City one year before. It has tracks like “Jumpin’ Jack Flash”, “Sympathy for the Devil” ( and “Street Fighting Man”. The album cover shows the drummer Charlie Watts dressed as Uncle Sam jumping with two guitar in his hands. Also a donkey in the back carrying the drums and another guitar.

The Who “Live At Leeds”

Slash also loves The Who and back in 2014 he listed in an interview with Esquire magazine the guitarists that were the greatest of all time. One of them were The Who’s Pete Townshend and Slash said: “He’s not even a lead guitar player, really. Or doesn’t consider himself as such. But he had a big impact on me from day one.”

In an interview with Epiphone in 2010, the musician named Nugent as an influence also citing Eric Clapton, Rick Nielsen, John Lee Hooker and Jeff Beck.

Released in 1978, Ted Nugent’s “Double Live Gonzo!” is a double live album that has classics like “Just What the Doctor Ordered”,  “Stranglehold” and “Cat Scratch Fever”. Besides Nugent, the band’s line-up on the record had Derek St. Holmes (Guitar and Vocals), Rob Grange (Bass) and Cliff Davies (Drums). In addition, the album has reached 3× Platinum status in the United States.

A big fan of Queen, Slash told 95.5 KLOS radio in 2022 that one of the most uncomfortable concerts he had ever played was with Velvet Revolver in 2005 because Led Zeppelin’s Jimmy Page and Queen’s Brian May showed up at the gig and it was the first time he saw them: “I was doing a show at Hammersmith. So I guess it was 2005 with Velvet Revolver. Jimmy Page and Brian May, who I’ve not met before, showed up at the gig.”

“And that was… Talk about just being really uncomfortable. But they’re lovely guys, really, really down to earth. So I was really happy to meet them and also to find that they were so, sort of, human. But I’ll never forget that as being one of the most intimidating shows I ever did.”

Recorded during Queen’s European leg of “Jazz Tour” during the first three months of 1979, the double live album “Live Killers” was released in the same year and was self-produced by the band members.

Thin Lizzy was also a big influence to Slash and he even paid tribute to the band when the original Kiss guitarist Ace Frehley invited him to play the classic Lizzy song “Emerald” on Ace’s covers album “Origins Vol 1”.

The most famous Thin Lizzy live album and one of the most famous of all time, “Live And Dangerous” was released in 1978 and captured all the intensity and energy of the legendary Irish group live in concert.

The record was the last one to feature guitarist Brian Robertson, who left the band shortly after the record was released. It was produced by the band and famous producer Tony Visconti. Also has classic tracks like “Jailbreak”, “Cowboy Song”, “The Boys Are Back in Town” and “Don’t Believe a Word”.