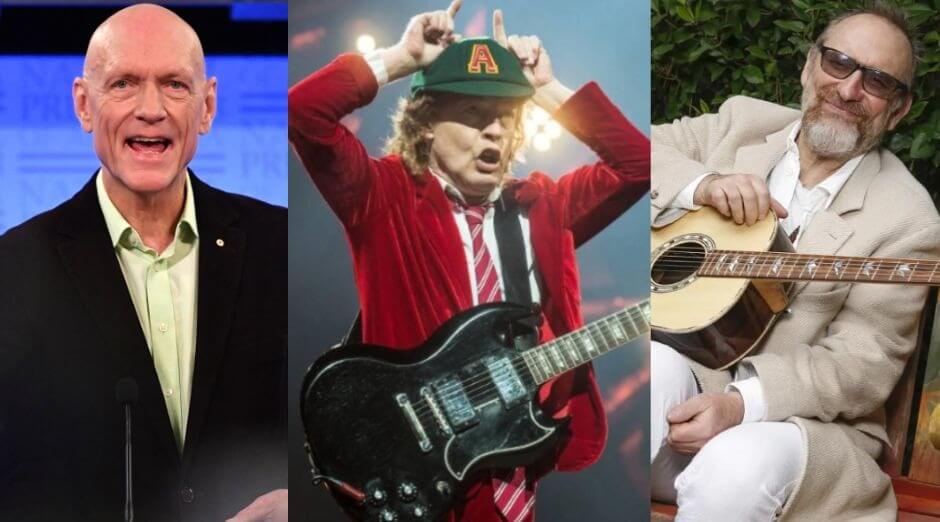 Most part of the legendary Rock bands are from the United States and United Kingdom that had very strong scenes since the 50’s. However, there are also many amazing Australian bands. The largest country in Oceania was the birthplace of many amazing musicians that sold millions of albums all over the world.

The 5 best Australian Rock bands of all time:

AC/DC was formed in Sydney, Australia in 1973, by Scottish brothers Malcolm and Angus Young and is one of the most famous Hard Rock bands of all time. They underwent several line-up changes before releasing their first album, High Voltage, in 1975. The line-up remained stable until bassist Cliff Williams replaced Mark Evans in 1977. In 1979, the band recorded the successful “Highway to Hell”. Vocalist and co-composer Bon Scott passed away on February 19, 1980, after consuming a large amount of alcohol and the body was found in the back seat of Alistair Kinnear’s car.

The group considered the split for some time, but quickly former Geordie frontman Brian Johnson was selected to replace Scott. Later that year, the band released their best-selling album, “Back in Black”.

Midnight Oil is an Australian rock band activist. They are known as a band of strong political and environmental ideals. Their way of approaching such themes turned the songs into hymns and their presentations into rallies, keeping the contesting and nonconformist spirit of rock alive. The Oils, as they are called by the fans, also became known for having obtained full control over their artistic work legally with the record company, not submitting to the rules of the phonographic market.

In the beginning the band revolved around three friends Jim Moginie, Rob Hirst and Andrew James, who in 1972 formed The Farm. The band gave anthological performances and won over a legion of fans, especially surfers from Sydney.

Men at Work was formed in Melbourne in 1979. The band peaked in the early 1980s with reggae influences and is best known for the 1982 hit, “Down Under”. The song is a cheerful and comical song about Australians traveling the world confident of their country’s virtues. Also talking about the imposition of American and European culture on beauty. The song was a sales success in several countries. Including the United Kingdom, where it reached the first place on the charts, being the only song of them to enter the “Top 20” of the country. It has become an unofficial anthem for Australia for various underground or musical movements.

Their first album, Business as Usual (1981) set a record for the longest time for a debut album as first on the United States charts. In addition to “Down Under”, the hits “Who Can It Be Now?” and “Be Good Johnny” became successful music videos during the early years of American MTV.

INXS was formed in 1977 by Andrew Farriss, Michael Hutchence, Tim Farriss, Jon Farriss, Garry Gary Beers and Kirk Pengilly. The group started out as The Farriss Brothers but changed its name after the release of the INXS album in 1980. Success would only come in 1983 with the release of the compact “Original Sin”.

The pinnacle of INXS ‘worldwide popularity came with Kick (1987) with hits like “New Sensation”, “Never Tear Us Apart”, “Need You Tonight”. Also “Mistyfy”, “Suicide Blonde”, “Disappear” and “By My Side”.

During the 80s and 90s the Australian band was a definite influence on Australian music, leading to the stardom of several musicians from their homeland. In addition, the band worked closely with other artists in Australia, such as The Models and Jenny Morris, helping them to stabilize their careers.

Hoodoo Gurus became very popular with surfers from various countries during the 80s and 90s. It received influences from some musical styles from the 70s, such as power pop and bubblegum pop. Among their biggest hits are “Come Anytime”, “What’s my Scene”, “I Want You Back” and “1000 Miles Away”.

Wolfmother was formed in Erskineville, Sydney suburb, in 2000. Their current lineup is Andrew Stockdale (vocals and solo guitar), Ian Peres (keyboard and backing vocals), Dave Atkins (base guitar), Hamish Rosser (drums) and Jake Bennet (bass). According to Andrew Stockdale, the band was the result of several years of “jams” in anonymity. The band would only go public around 2003, shortly after releasing their EP of the same name Wolfmother EP.

Their music is described as Classic Hard Rock, inspired by great bands from the 1970s such as Black Sabbath, Led Zeppelin and Deep Purple. Also incorporating elements of psychedelic and even folk rock. In addition, they won the 2007 Grammy with the song “Woman” as the Best Hard Rock Performance category.