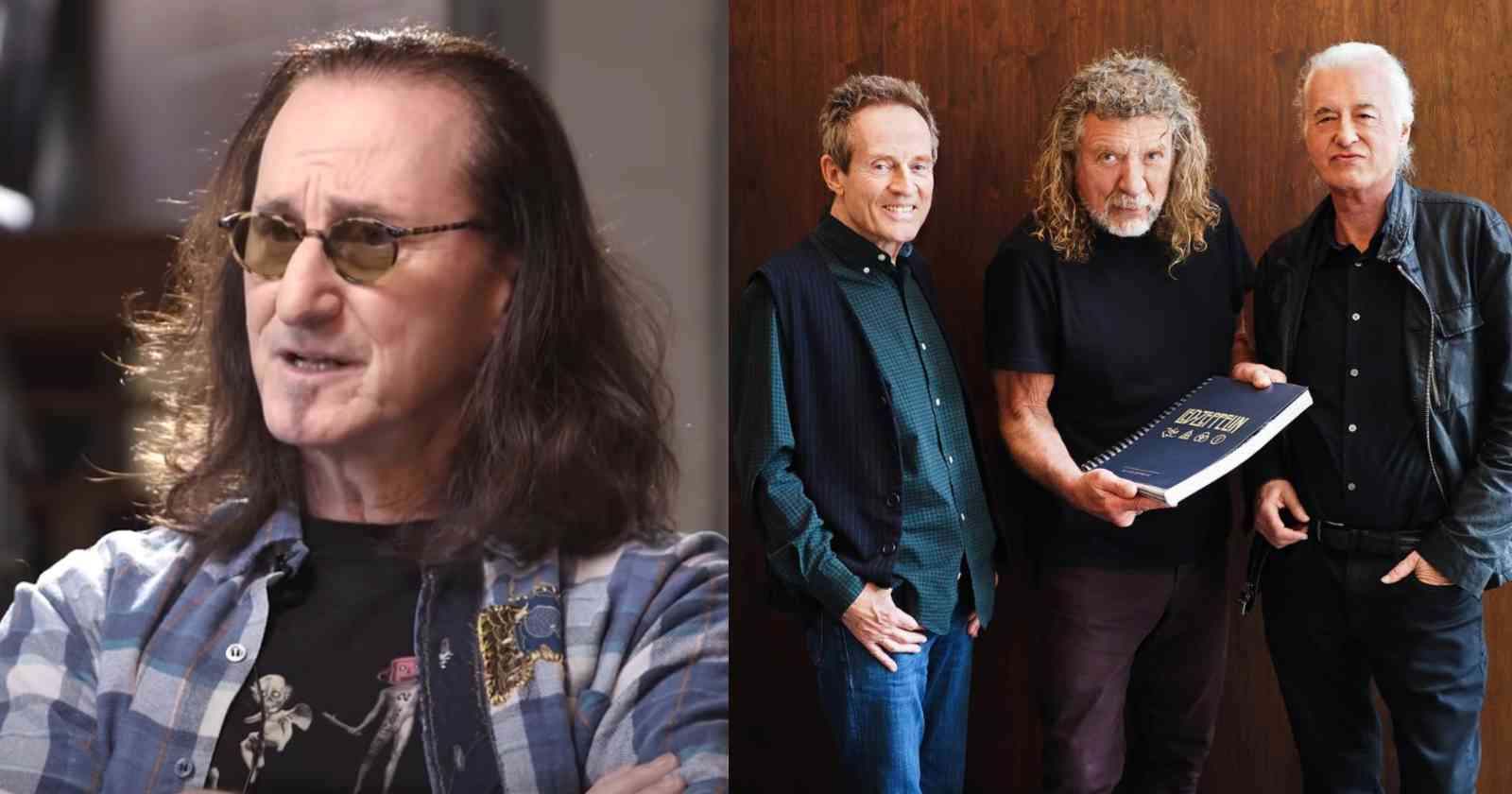 Formed in London back in 1968 by John Paul Jones, Jimmy Page, Robert Plant and John Bonham, Led Zeppelin helped to make Rock and Roll music heavier, becoming one of the most influential Hard Rock bands of all time. Many bands that appeared in the 70s were heavily influenced by their sound and one of them was the Canadian band Rush, famous for mixing Hard Rock with Progressive Rock music. Over the decades, the band’s vocalist, keyboardist and bassist Geddy Lee talked about Zeppelin and Rock and Roll Garage selected the 5 songs of the British group that Lee said are some of his favorites of all time and explained why he likes them so much.

The 5 Led Zeppelin songs that Geddy Lee listed as favorites

In an interview with The Quietus in 2012, Geddy Lee listed his 13 favorite albums of all time and one of them was Zeppelin’s debut record. When explaining why he chose the album, he revealed that the track “Communication Breakdown” influenced him a lot.

“To some it might seem like an unlikely Led Zeppelin album to choose. But, for me, it captures a moment. Led Zeppelin came to Toronto. I remember staying up all night to get tickets. I think I am right in saying that this album had only just been released and we went to see them. We were very young and, as such, a little bit on edge and eager to sample anything.”

“Then I heard ‘Communication Breakdown’ and a trigger went off in my head. That was my Punk Rock, really. The surge of power was something I had never experienced before. There are greater and more adept and adventurous Led Zeppelin albums. We all know which they are. But this was just the kind of explosion you can only really enjoy when you are young,” Geddy Lee said.

Led Zeppelin’s self-titled debut album is one of the most influential debut records in the history of music. It was recorded in 1968 only a few months before it’s release in 1969 and it was produced by the band’s guitarist Jimmy Page. The album reached the Top 10 in the United States and United Kingdom at the time.

“How Many More Times” is another track from Zeppelin’s debut that Geddy Lee likes as he revealed  in an interview with Guitar World back in 2014.

Lee had the chance to see many legendary bands in Canada when he was a teenager and Rush didn’t even existed yet. Besides Zeppelin, he saw groups like Genesis, Yes, Jethro Tull, Pink Floyd and Cream.

Also from Zeppelin’s first album, “You Shook Me” was chosen by Geddy Lee in an interview with Sirius XM Classic Vinyl Influences show (Transcribed by Rock and Roll Garage) back in 2013 as one of the tracks that were big influences to him.

“When Led Zeppelin came out I was already playing in a band with John Rutsey and Alex. I remember the first Led Zeppelin record came out. John (Rutsey) brought it over to my house. He sat in my bedroom and put this record on. We just couldn’t believe the sound we were hearing.”

“It was bluesy but it was Progressive Heavy. The term ‘Heavy’ didn’t really exist back then in terms of characterizing Rock music that had this power behind it that was not volume. So it was the power that was weight, the chord structure and the impact had weight.”

“We’ve got tickets and waited out in the wee hours of the morning. They were playing a place called The Masonic Temple. (It) only holds 1200 people max. We got into the second row and I remember when they came out on the stage they started with a song called ‘Train Kept On Rollin”, which is and old kind of Blues standard.”

“What Is and What Should Never Be”

Talking with Rolling Stone back in 2019, Geddy Lee listed “What Is and What Should Never Be” as one of his favorite “bass songs”.

“There are so many songs I could choose from Zep that feature profound but understated bass playing. But this one is my fave. The way John Paul Jones changes gear, holds down the heavy bottom and adds terrific melody throughout the song. He is such a fluid player and all-round musical talent,” Geddy Lee said.

The track is part of the band’s second album “Led Zeppelin II” released in 1969, only a few months after their also successful debut record. Their second effort was the first album of the group to reach first position on the United States and United Kingdom charts. It sold more than 12 million copies worldwide.

Another track from Led Zeppelin’s second album that Geddy Lee also likes, “The Lemon Song” was inspired on the classic Howlin’ Wolf song “Killing Floor”. After legal battles, the bluesman was included as one of the songwriters of the track.

Back in 2019, Geddy Lee he chose for Amazon Music the 22 songs that inspired his bass playing consciously or subconsciously. One of them was “The Lemon Song”. Geddy Lee explained the playlist, saying (Transcribed by Rock and Roll Garage): “I chose these songs because I’m such a ‘bass-centric dude’. That’s all I’ve been thinking about for the last few years.”

“Is the role of bass in popular music and what I tried to do with my book (The Beautiful Book of Bass) was provide an alternate history of popular music through the point of view of the bass player. From the murky bottom end to the twangy top end,” Geddy Lee said.