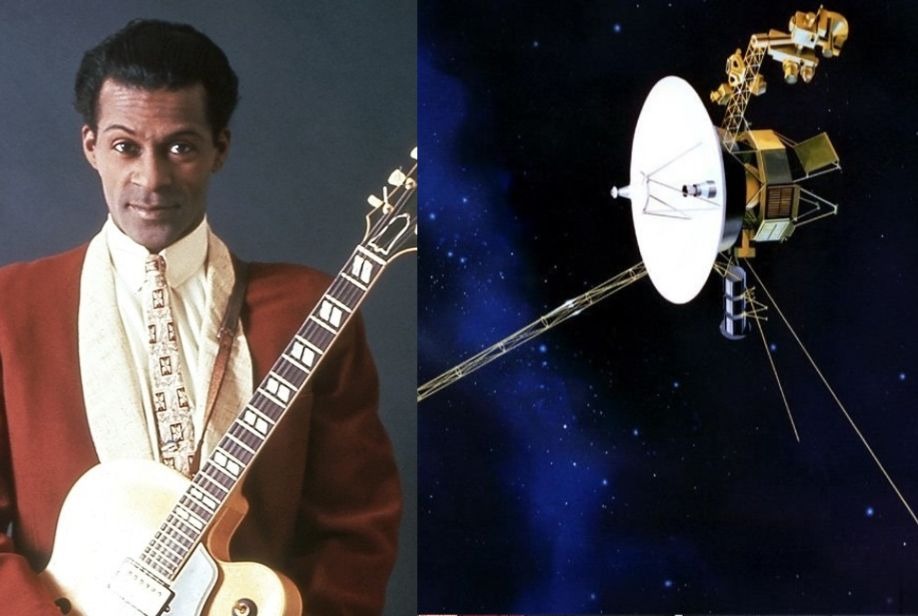 In 1977, Nasa launched two spacecrafts called Voyager in space with two gold discs playing sounds and songs uninterruptedly and featuring the cultural, natural and industrial diversity of planet Earth – from Chuck Berry to Bach, from industrial machines to volcanic eruptions.

The Golden Record project was led by American astrophysicist Carl Sagan and meant an optimistic attempt to communicate with extraterrestrial life – or with anyone who had contact with the records. The two spacecraft will never return to Earth and are therefore called the “Grand Tour” – an eternal interchange.

Almost 40 years later, the recordings called “To the makers of music – all worlds, all times” follow their search for interstellar contact. Last year, BBC Radio compiled some of the sounds in a one-hour digital playlist.

The album To the makers of music is a “chance to imagine yourself as an alien in a distant galaxy that finds a spaceship in your garden. Somehow, you become adept at following the instructions on the side of the record, and hopefully your auditory sense and planetary atmosphere will allow you to hear what’s in it, “says an excerpt from the BBC’s text.

NASA keeps live information about the spacecraft’s displacement on its website: Voyager 1 is 21 billion kilometers from Earth, while Voyager 2 is closer: 15 billion kilometers. This means that if a light is lit on Earth to illuminate the two ships, the first one would only be struck 19 hours later, while the second would take 16 hours to illuminate. According to the US agency, the two are the fastest and most distant spacecraft the Earth has ever placed in space.

Last year, on the 40th anniversary of the launch of the two Voyager, NASA said Voyager 1 was the only spacecraft to enter interstellar space in history, and that Voyager 2 was the only one to be able to fly in the orbits of the four planets “Giants”: Jupiter, Saturn, Uranus and Neptune. There is also a video on the agency’s YouTube channel with some photos and sounds that the two expeditions have already sent to Earth since then.

“We come out of our solar system into the universe looking only for peace and friendship – to teach if we are called to such, to learn if we are fortunate. We know well that our planet and all our inhabitants are a small part of this immense universe that surrounds us, and it is with our humility and hope that we take this step. ”

\In addition to the audios, the Voyagers carry 118 photographs and, according to NASA, the “brain waves of a young woman in love.” The project “Golden Record” wanted to include the song “Here Comes the Sun” of the Beatles, and was even authorized by the band itself, but had access to the material denied by the record company owner of the song rights.

On Voyager’s “Music From Earth” page on the Nasa site, there is a list of the 27 songs that were sent on the discs.