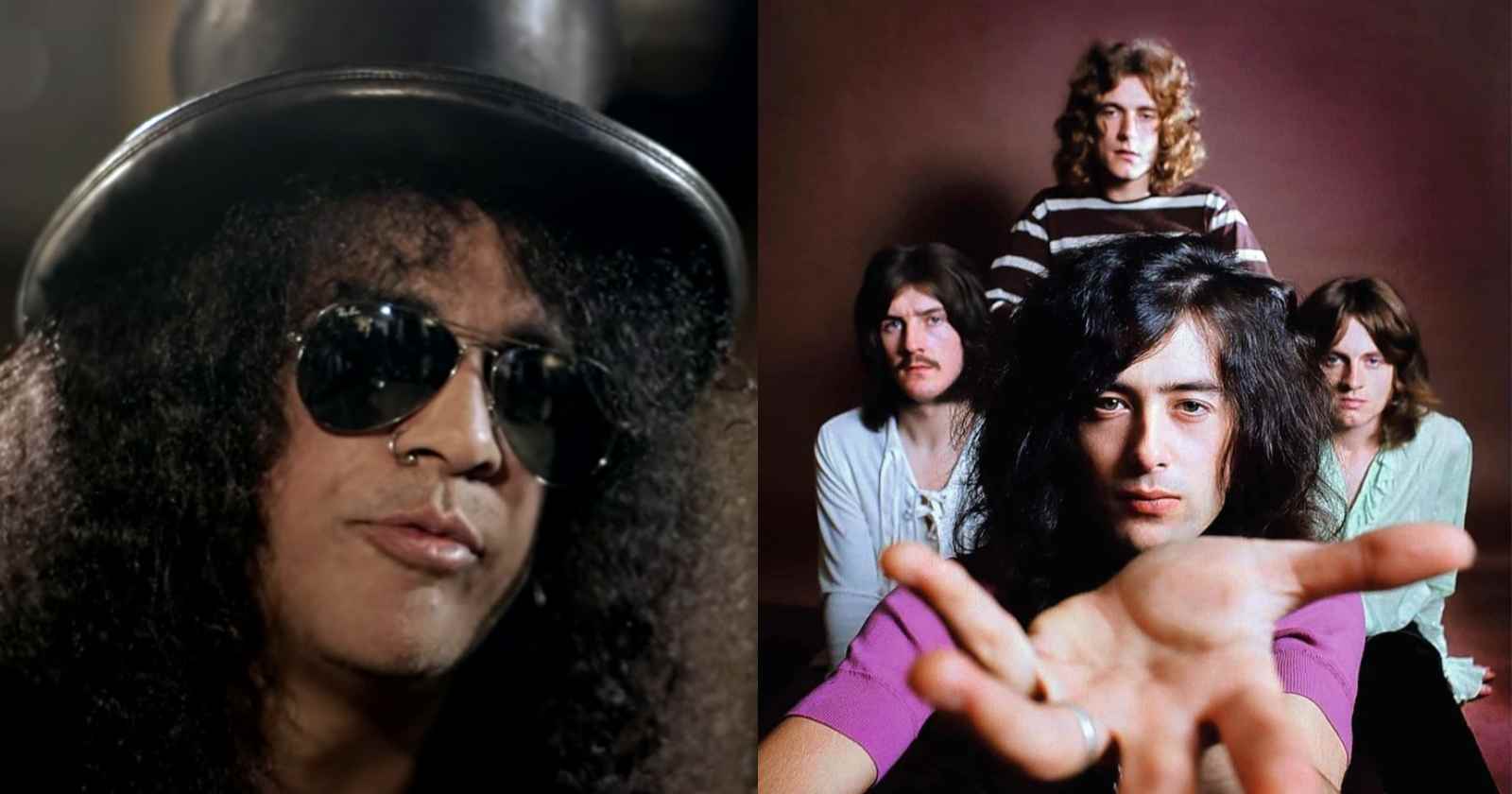 Formed by the guitarist Jimmy Page alongside singer Robert Plant, bassist and keyboardist John Paul Jones and drummer John Bonham in 1968, Led Zeppelin became one of the most successful bands of all time with an estimated amount of 200 to 300 records sold worldwide. Their albums influenced a whole generation of musicians, especially in Hard Rock and one of them is the Guns N’ Roses guitarist Slash. Rock and Roll Garage selected the two Led Zeppelin songs that the American guitar player said are some of his favorites of all time.

During a radio interview in 2019, made available by Raised On Radio (Transcribed by Rock and Roll Garage), Slash picked the classic song “Whole Lotta Love” as the one that influenced him the most.

“There is a song that even before the ‘Rocks’, Aerosmith record came along that definitely had a big influence (on me). I mean, I didn’t had any aspirations to be a musician. But I really loved music all my entire childhood. So I was really drawn to it. (I) loved pulling out records,  putting them on, listening to them. I think I can name classic records that (I used to like) when I was a kid. But one that really had an impact on me was the ‘Zeppelin II’ record. The song that means the most to me because it had such an impact on me would be ‘Whole Lotta Love’”.

“I think that sort of speaks to a subliminal thing that later on when I started to play guitar (was) what I was drawn to. So a lot of the music I was really into as a kid, without ever having thought playing guitar turned up later as having a really big influence on me.”

“‘Whole Lotta Love’ was just this really sexy, slezy, guitar driven thing that I just loved. That actually ended up being sort of the catalyst for my first experimentation with distortion. (Also) Les Paul’s and that kind of thing. Oh god, it was so cool. It was just such a great introduction to the 70s. (Also to) where the 70s was going to go,” Slash said.

The musician likes the track so much that he even listed in an interview with CNBC back in 2015 as one of the songs he would choose to hear at the end of the world.

“Whole Lotta Love” was released by Led Zeppelin as the opening track for their second studio album Led Zeppelin II on November 7, 1969. It was originally recorded in several studios in New York and Los Angeles during the band’s second US tour. Also was produced by Jimmy Page at Olympic Studios in London.

Talking with Signed Media back in 2010 (Transcribed by Rock and Roll Garage), Slash listed three albums that inspired him the most and one of them was “Led Zeppelin II”.

The other Led Zeppelin song that Slash said it is one of his favorites of all time is “Black Dog”. The track is from the band’s fourth album “Led Zeppelin IV” released in 1971.

In a conversation with Paste Magazine in 2010 he revealed his 10 favorite guitar riffs of all time and “Black Dog” was his favorite one. “This one (Black Dog) seems obvious, I guess. This song is just fuckin’ monstrous. Real, real heavy,” Slash said.

Talking with Rolling Stone magazine back in 1992, he recalled that he used to make his grandmother scared when he was a kid and played the “Black Dog” riff around the house. “My grandmother bought me my first guitar. I used to fuck up around the house, and my grandmother would chase me around the couch. She’d freak out when I’d play “Black Dog” really loud. I wasn’t ready for her death at all. I think of her a lot. She’s with me all the time, I guess,” Slash said.

That record also had other classic tracks like: “Rock and Roll”, “Stairway To Heaven” and “Going To California”.