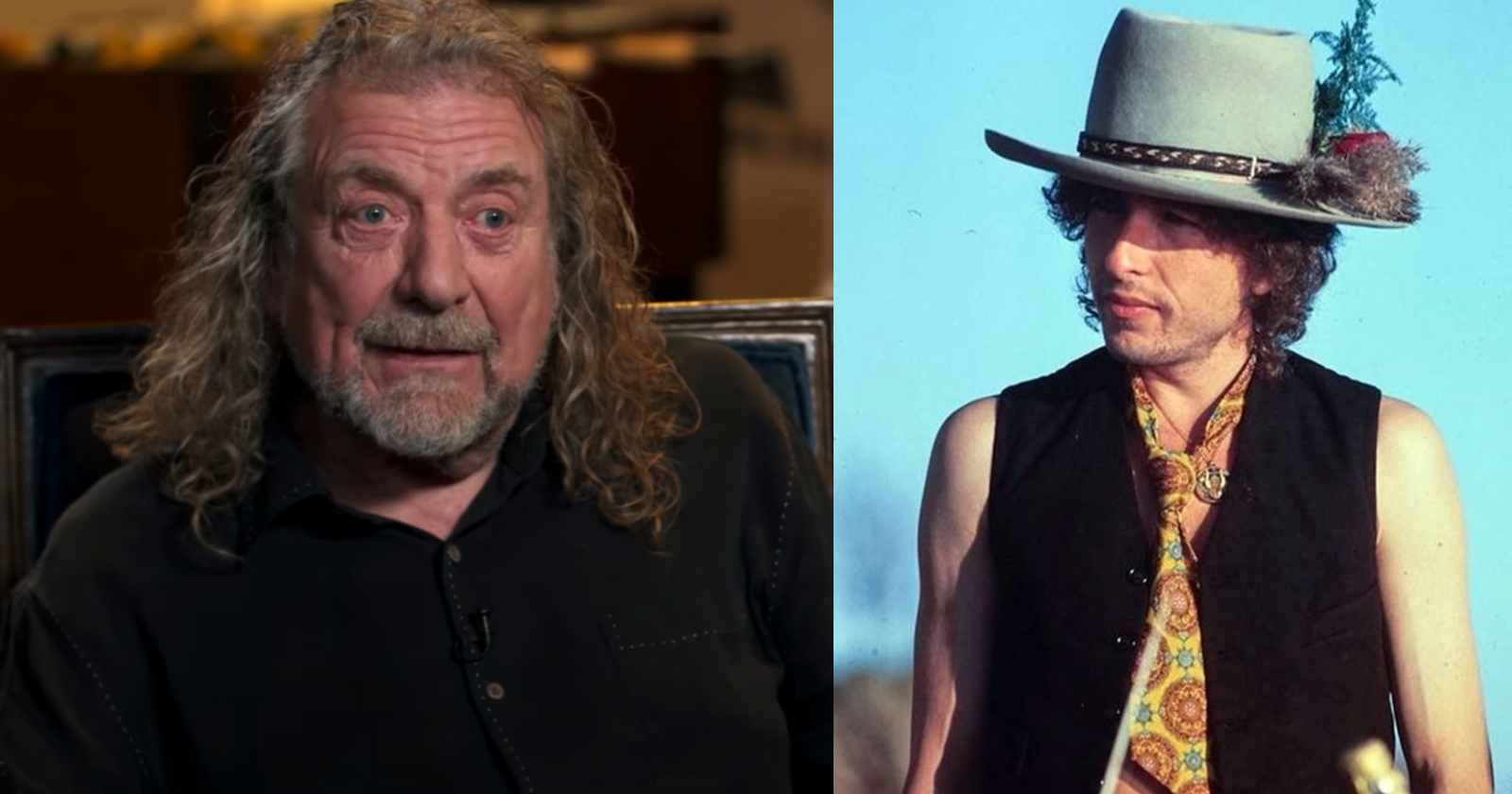 Since Bob Dylan started his career in 1961, Folk and Rock music never were the same again. The musician showed his peers that it was possible to be successful writing about everything, and that they could talk about more than just love in their songs. He influenced a whole generation of bands and was an important figure in the Pop Culture of the 20th century. Over the decades many artists shared their love for Dylan and one of them is the legendary Led Zeppelin vocalist Robert Plant. Rock and Roll Garage selected the two Bob Dylan songs that Plant said are some of his favorites of all time.

The 2 Bob Dylan songs that  Robert Plant picked as favorites

During a participation on the BBC Radio 6 show “6 Music’s Festive Takeover” in 2021 (Transcribed by Rock and Roll Garage), Robert Plant revealed some of his favorite songs and one of them was the classic Bob Dylan track “Masters Of War”. “Goodness, does that ever go away, that theme, that feeling that we all have? That’s Bob Dylan‘s ‘Masters Of War’, from 1963, ‘The Freewheelin’ Bob Dylan’ album on Columbia”. There is so much that can be said about Dylan and about his intentions and his lyrics. How many millions of people have actually sung his songs and hopefully delivered the same intent”, Robert Plant said.

“Masters Of War” was first released by Bob Dylan on his 1963 famous album “The Freewheelin’ Bob Dylan”.

The melody of the track was adapted from the traditional song “Nottamun Town”. His lyrics are a protest against the use of nuclear arms in the early 60s during the Cold War.

That record also had classic tracks like “Blowin’ in the Wind”, “Girl from the North Country”, “Don’t Think Twice, It’s All Right” and “A Hard Rain’s a-Gonna Fall”.

“One More Cup of Coffee”

Another Bob Dylan song that Robert Plant loves is “One More Cup Of Coffee”. The musician talked about the track in an interview with Charlie Rose (Transcribed by Rock and Roll Garage) back in 2005.

“Dylan’s gotta be ‘One More Cup of Coffee’, I think. I think is such a fantastic song.”

“How can I forget Dylan’s contribution when he was the guy who woke us all up. So there was a reactionary musical scene on the colleg circuits with Ramblin’ Jack Elliott, Woody Guthrie, Odetta, Dave Van Ronk, all those people who were around. But Dylan made it sexy and he also brought it home in such a vital way.”

“Can you imagine, there is a great thing on Broadway now ‘Hairspray’ and the thing is that the great end to that program is that after all the Rock and Roll and the Philadelphia sound with the Cameo-Parkway (Records), Bobby Rydell, all that stuff.”

“So suddenly you cut to a room and there is a guy sitting there playing an acoustic guitar singing the first protest song. That’s the end of the show. Because it’s the end of the era of the schmooze and the schmaltz. It’s the beginning of that sort of reflective social conscience.”

“Dylan he sang some songs. So I don’t how he actually survived, the way that he sang about the lynchings in Oxford, Mississippi”. Charlie Rose then completes saying that Dylan was a “true poet” and Robert Plant replies, saying: “Yeah. He wouldn’t like anybody to say that, I know why not just because he’s been awkward,” Robert Plant said.

“One More Cup of Coffee” was first released by Bob Dylan on his 1976 album “Desire”. The musician said that the song was inspired by his visit to a gypsy celebration at Saintes-Maries-de-la-Mer in France on his 34th birthday. Emmylou Harris sings with Dylan in the song.

That album also had other famous tracks like “Hurricane”, “Isis” and “Mozambique”.