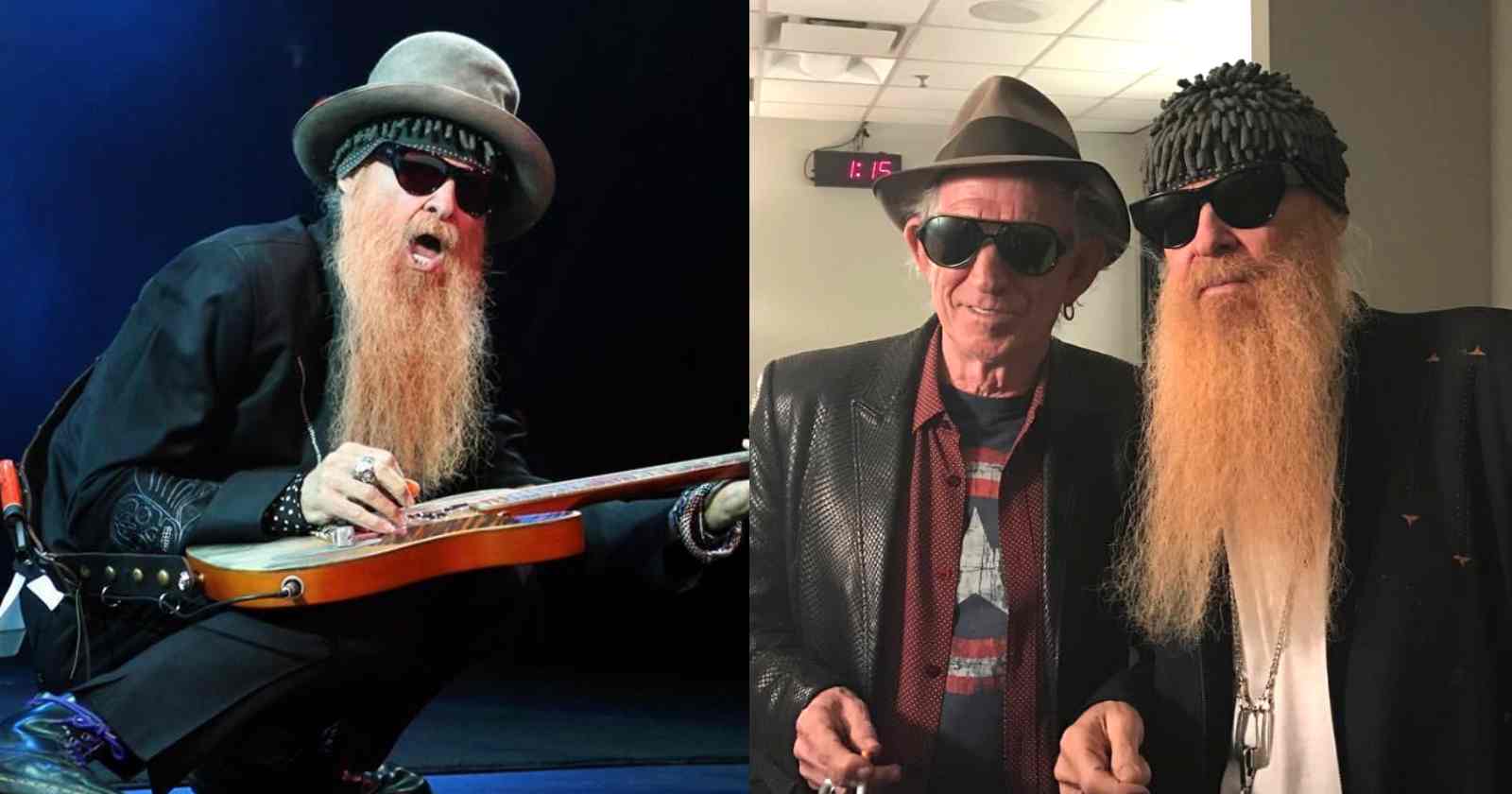 Billy Gibbons made history as the vocalist and guitarist of ZZ Top, one of the most successful Blues Rock bands of all time. Alongside Frank Beard (Drums) and Dusty Hill (Bass – died in 2021), he helped the band to sell an estimated amount of 50 million records worldwide.

The trio was perfect but if he could form a dream band, Gibbons would bring 11 more members as he revealed in an interview with Elmore Magazine back in 2010. Rock and Roll Garage selected what Gibbons said about those artists over the decades and his connection with some of them.

The 11 musicians Billy Gibbons would choose for his dream band

“Me, Jagger and Keith Richards as singers. And this will make a rather amusing addition: Jeff Beck as a singer,” Billy Gibbons said to Elmore Magazine.

The ZZ Top frontman is a great friend of all the three musicians, Keith Richards was even the one who inducted the power trio into the Rock and Roll Hall Of Fame back in 2004. Talking with BBC’s “The Rock Show With Johnnie Walker” back in 2019, Gibbons chose Mick and Keith as his Rock Gods (Transcribed by Rock and Roll Garage), saying: “Both Mick and Keith, two peas in a pod. They still remain robust and stalwart in the eyes of ZZ Top land. Two characters in their own right. But I think it’s a comfortable way to give them a proper pairing.”

“Meeting the Stones for the first time goes back to 1972. The Stones had booked three appearances in Hawaii. They had a Friday night show, a Saturday afternoon matinee and a Saturday night show. How ZZ Top got picked to be part of that triumvirate? Three excursions into Rock and Roll land was delightful. We spent less time working up music and rehearsing the show than we did hanging out at the Waikiki Beach at the Rainbow bar. Need I say more?”

An important drummer of the Texas Blues scene, Doyle Bramhall died in 2011 at the age of 62. He is remembered for working with Jimmie Vaughan and Stevie Ray Vaughan in bands they had before they became famous. He also co-wrote several songs with SRV later on when he was already successfully on his solo career.

Doyle is also the father of the famous Blues guitarist Doyle Bramhall II, who already worked with names like Eric Clapton and Roger Waters.

“Dusty might want to take a smoking break, but I’d get Eddie Taylor, who played with Jimmy Reed’s trio—two guitars and drums. You listen to those records and you don’t realize that there is no bass. Eddie played the bottom-end sides, the bass lines,” Billy Gibbons said to Elmore magazine.

Also known as “Playboy” Taylor, Eddie was a guitarist and singer who is famous for his contribution with Jimmy Reed. He also worked with names like John Lee Hooker, Big Walter Horton and Sam Lay. He died in 1985 at the age of 62.

“An organist would be Jimmy Smith or Jimmy McGriff, or John Patton. I would clump those guys,” Billy Gibbons told Elmore magazine.

All very respected and influential organists, the musicians picked by Gibbons had in common the style influenced especially by Jazz music. They are also mixing that kind of playing to R&B and Blues.

Jimmy Smith and John Patton are remembered for their use of the Hammond B-3 organs, which became a quite popular instrument in the 60s.

A guitarist that most musicians would love to have in their bands, Jimi Hendrix is one of the most influential artistis of all time. He expanded the possibilities of the electric guitar in the late 60s and influenced countless musicians over the decades. Billy Gibbons was lucky enough to meet Hendrix when The Moving Sidewalks, Gibbons band before ZZ Top, was his opening act in some shows in the United States. They became friends and Gibbons learned a lot watching him play.

Talking with Rolling Stone in 2017, Gibbons about what he learned with Hendrix, saying: “He was a real technical wizard. He was inventing things to do with the Stratocaster guitar I am confident the designers had no clue would unfold in later years. Jimi had the talent to make that work for him. His technique was very peculiar in that he was playing a right-handed guitar in a left-handed style, upside down. To look at it and try to figure out what he was doing was very daunting.”

“But we got to share opposing hotel rooms always at the end of the hall and the doors were always open. He had a record player delivered each and every afternoon, and he would motion to me: ‘Come on over here. Lets see if we can figure this out.’”

“And we wound up listening to Jeff Beck trying to figure things out. I said, ‘Jimi, chances are that Jeff Beck is sitting there listening to you saying the same thing. ‘How do we do this?’”

Born in Dunleith, Mississippi back in 1925, Jimmy Reed is recalled for his particular style of electric Blues that was even popular with audiences that didn’t liked the music genre. Some of his most famous songs are “Baby What You Want Me To Do” and “Big Boss Man”.

The ZZ Top frontman revealed in an interview with Rolling Stone back in 2015 that one of the first songs he learned to play was from Jimmy Reed. “It was Christmas day 1962 at the age of 13 and ‘the first guitar landed in my lap. It was a Gibson Melody Maker, single pickup. .He was the good-luck charm. I’d play Jimmy Reed going to sleep at night and in the morning.”

Jimmy Reed was inducted by ZZ Top into the Rock and Roll Hall of Fame back in 1991, with Gibbons saying in the speech: “I can’t buy a car without first playing a Jimmy Reed tape before driving it”.

Stevie’s older brother, Jimmie Vaughan was his first influence, since he was the one who introduced his little brother to music. Born in 1951, 3 years before SRV, Jimmie started his career during the late 60s. In 1969 the band he was playing with even had the opportunity to be Jimi Hendrix‘s opening act. The most famous group he was part of was The Fabulous Thunderbirds.

Vaughan is a good friend of Billy Gibbons. The two have played together annually in the supergroup “The Jungle Show” in Texas.