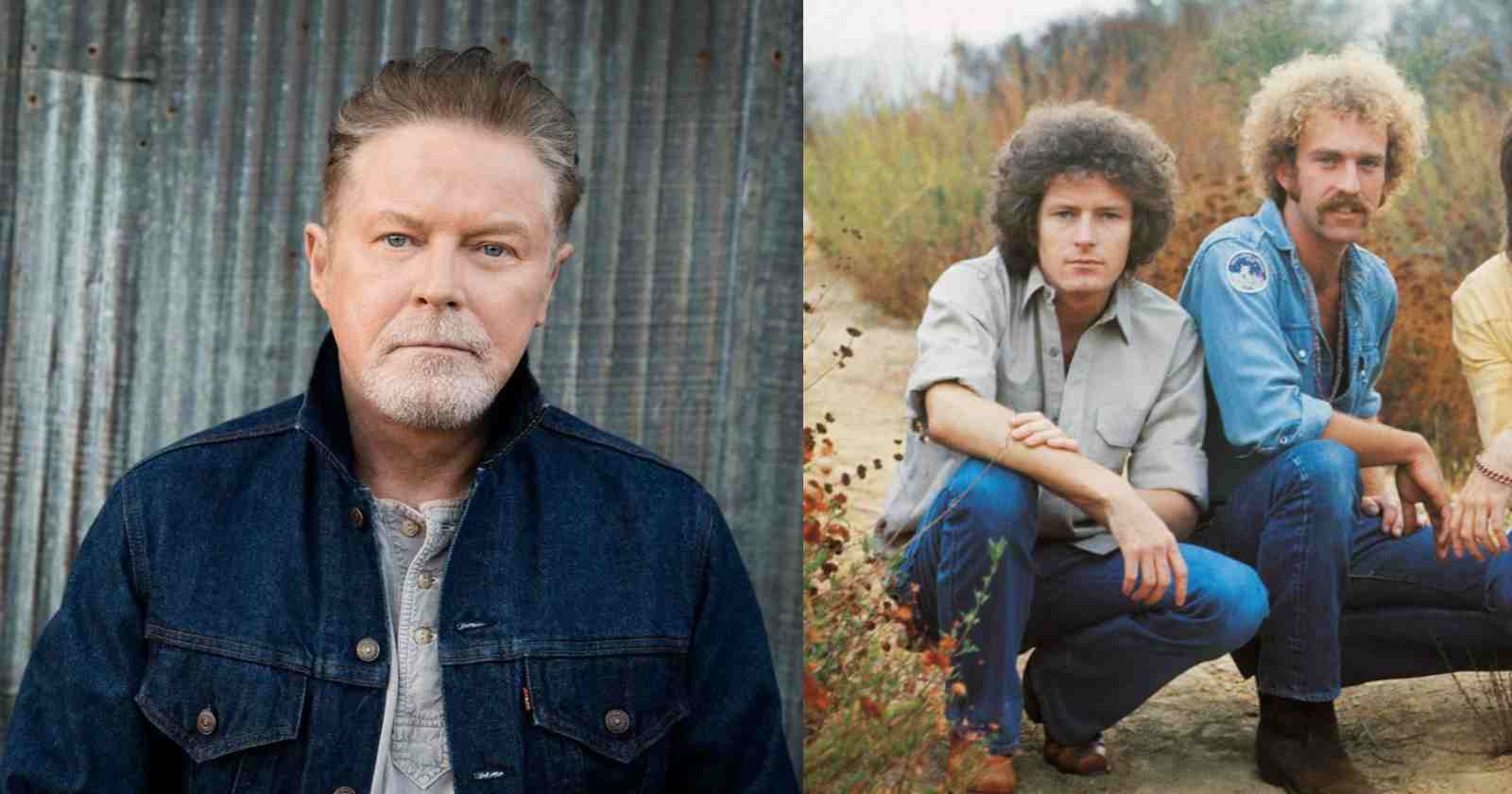 The drummer and singer Don Henley helped The Eagles to creat classic albums like “Desperado” (1973), “One Of These Nights” (1975) and “Hotel California” (1976) that were crucial for the band to become one of the best-selling bands of all time with more 200 million records sold worldwide.

Even though The Eagles is a Rock and Roll band they were also heavily influenced by Country Music and Henley revealed in an interview with BBC Radio 2 back in 2019 (Transcribed by Rock and Roll Garage) some of his favorite songs of the genre and explained why they are so important to him.

The 11 Country songs that Eagles’ Don Henley listed as favorites

“Buck Owens was actually born in my home state of Texas in a small town called Sherman, Texas. He is primarly known and associated with the Bakersfield sound, Bakersfield, California. But he was born in Texas. One of his biggest hits was a song called ‘Act Naturally’ that was actually covered by The Beatles. Ringo Starr sang that song and you know, that was a good version. But Buck’s version is my favorite,” Don Henley said.

Buck Owens died back in 2006 at the age of 76 and is considered one of the most important Country musicians of all time. He was inducted into the Country Music Hall Of Fame and Nashville Songwriters Hall Of Fame.

Other famous Buck Owens songs are “My Heart Skips a Beat”, “I’ve Got A Tiger By The Tail” and “Streets Of Barkersfield”.

“My absolute favorite Country singer of all time is probably a gentleman named Merle Haggard. (He) has a voice that is just like gold to me. It’s one of the greatest voices of all time, I think. Merle’s family originated I believe in Oklahoma, they were ‘okies’ who went west and Merle ended up out in California. He recorded many, many hits over the years, beginning way back in the 1960s and he is someone that I only met a couple of years ago.”

“I’ve met him when he came to play in a little theater in my hometown of Linden, Texas. It was a real pleasure to meet him. He is quite a character to say the least (laughs). He is really something else. There are a number of songs that are of his that are my favorite Country songs. One of those songs is a ballad called ‘Silver Wings’,” Don Henley said.

Born in Oildale, California back in 1937, Merle Haggard achieved fame writing songs about the working class and anti-Vietnam war. From 60s until the 80s he had 38 number one hits on the United States Country charts. In 2006 he received a Grammy Lifetime Achievement Award.

Some of his most famous songs are “Mama Tried”, “Pancho and Lefty” and “Big City”.

Matraca Berg “If I Had Wings”

“One of my favorite female singer-songwriters is a woman named Matraca Berg. She lives in Nashville, Tennessee, she has written hits for a number of artists including Trisha Yearwood and Matraca occasionally makes an album herself and this song is a song that is on her album called ‘Dreaming Fields’, which has some brilliant songs on it,” Don Henley said.

Born in Nashville, Tennessee back in 1964, Matraca Berg was inducted into the Nashville Songwriters Hall Of Fame in 2008 and has wrote songs for famous artists like T.G Sheppard, Karen Brooks, Deana Carter and Kenny Chesney.

“A woman who has recorded a Matraca Berg song called ‘Dreaming Fields’ and this is my favorite version. Matraca did this song but I like Trisha Yearwood‘s version better. I’m sorry, Matraca (laughs). I get tears in my eyes everytime I hear this song. It just kills me because it reminds me of my father and my grandfather who were both farmers at one point. This is a story, perhaps about Matraca Bergs’ grandfather,” Don Henley said.

Born in Monticello, Georgia back in 1964, Trisha Yearwood first achieved fame with her 1991 debut singl “She’s In Love With The Boy” that became a number one hit on the Billboard Country Singles. Over the years she also became an actress, celebry chef, television personality and author.

Some of her most famous songs are “How Do I Live”, “Shallow” and “Walkaway Joe”.

“This man is my favorite singer of all time and he has never been known necessarily as a Country artist but he did a groundbreaking album back in the 1960s called “Modern Sounds in Country and Western Music”. That album changed my life. I wore out at least two vinyl copies of it. It had some wonderful songs on it. This song has been recorded by a number of Country artists but this is in my opinion the definitive version of this song,” Don Henley said.

One of the most important American musicians of all time, Ray Charles was often called by friends “Brother Ray”. He pioneered the soul music genre back in the 50s with the combination of blues, jazz, rhythm and blues, and gospel styles into the music he recorded for Atlantic records. Some of his most famous tracks are “Hit The Road Jack”, “I’ve Got a Woman” and “What’d I Say”.

“Patsy Cline in many circles is regarded as one of the finest Country singers ever to come down the pike and I would agree with that. She unfortunately passed away in a plane crash much too soon in her life and who knows what she would have gone on to accomplish. But she did leave a wonderful legacy, including this wonderful song that was written by Mr. Willie Nelson,” Don Henley said.

As The Eagles drummer and singer said, Patsy Cline died too soon in a plane crash back in 1963 at the age of 30. She is considered one of the most influential American singer of the 20th century. Also being one of the first artists to successfully mix Country and Pop music. Some of her most famous songs are “I Fall To Pieces”, “Walkin’ After Midnight” and “She’s Got You”.

Willie Nelson “Always On My Mind”

Don Henley didn’t explained why he chose Willie Nelson‘s ‘Always On My Mind”, but Nelson is one of the most important living Country artists. He  is active in music since the mid-50s and continues to tour.  Besides several contributions with other artists during his career, Nelson was also part of the Country supergroup “The Highwaymen” that also had Johnny Cash, Waylon Jennings and Kris Kristofferson.

Some of Nelson’s most famous songs are “Highwaymen” (With the supergroup), “Mammas Don’t Let Your Babies Grow Up To Be Cowboys” and “Always On My Mind”.

Jamey Johnson “Good Times Ain’t What They Used To Be”

“A young man who is not widely known in Britain, not even widely known in the United States but he will be someday. He is what I would refer to as the ‘real deal’. So he is from the state of Alabama, if you see him, if he walks into a room he is quite an imposing presence. He looks like a biker (laughs). He’s got the hair, the beard and the whole thing going on. I discovered him quite by accident, I was on the internet one day, just surfing around and I was looking for things by another one of my favorite Country singers Mr. George Jones and I came across a video of a group called Blackberry Smoke.”

“They were in a studio somewhere in the south and they had invited George Jones to come and sing a song with him. It was one of George Jones’ hits called ‘Yesterday’s Wine’. Singing along with George Jones and this group called Blackberry Smoke was a big imposing tough looking guy and he took one of the verses. His voice was just incredible. In fact, he sounded a greal deal like George Jones himself and I thought ‘This guy is the natural successor to George Jones’. It turns out that George befriended this young man and became sort of a mentor to him before George passed away,” Don Henley said.

Born in Enterprise, Alabama back in 1975, Jamey Johnson has released 5 studio albums from 2002 to 2012 and recorded with many other famous artists like Willie Nelson, Blackberry Smoke and Kris Kristofferson. Some of his most famous songs are “In Color”, “High Cost Of Living” and “That Lonesome Song”.

“Emmylou Harris has one of my favorite voices in Country music or in any genre of music. I’ve had the pleasure of working with her a number of times. We’ve done a few concerts together, we’ve harmonized together. It’s actually a Buck Owens song, first done by Buck but I love Emmylou’s version of it,” Don Henley said.

Born in Birmingham, Alabama, Emmylou Harris has won several Grammy Awards during her succesful carrer. He also collaborated with famous musicians like Dolly Parton, Linda Ronstadt, and Rodney Crowell. Some of her most famous tracks are “Wildflowers”, “Same Old Train” and “Boulder To Birmingham”.

“This next lady is a dear, dear friend of mine. I had the pleasure of working with her very early on in my career even before The Eagles were formed. I was a member of her backup band and I traveled with her in the spring of 1971. We did gigs together. Glenn Frey and I were both in her band at the same time. That’s the period we planned and plotted to have a band of our own which eventually became The Eagles of course.  This was the first Linda Ronstadt song that I fell in love with. It was on her second album, I believe (Actually was the first one), which was called ‘Hand Sown … Home Grown,'” Don Henley said.

Another successful female singer, Linda Ronstadt was born in Tucson, Arizona back in 1946 and received several Grammy Awards during her career. She also charted 38 times on the United States Billboard Hot 100 singles.

Glen Campbell “By the Time I Get to Phoenix”

“This gentleman I had the pleasure of meeting only once. We had a wonderful evening together talking about music and the recording industry many, many years ago. He has one of the greatest voices in music. He is also a very underappreciated musician. One of the best guitar players ever to emerge on the American music scene. He played on a lot of very famous records that people probably aren’t aware of.”

With a five decade career, until his death in 2017 at the age of 81, Glen Campbell released 64 albums and sold an estimated amount of 64 million records worldwide. Some of his most famous tracks are “Southern Nights”, “Rhinestone Cowboy” and “Wichita Lineman”.