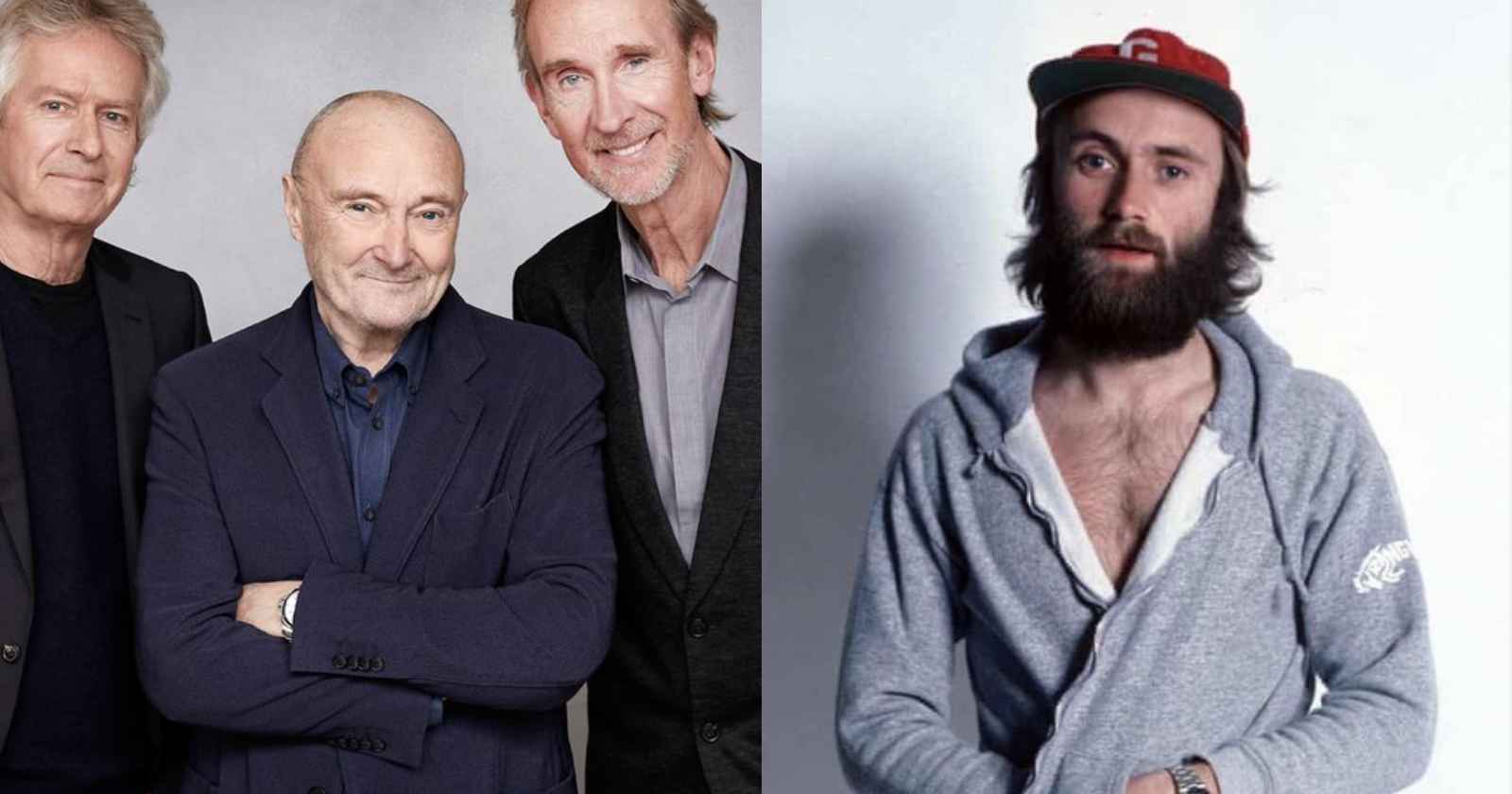 Genesis frontman and a succesful solo singer, Phil Collins inspired a whole generation of musicians with his drumming and singing over the decades and in an interview with Ken Bruce in the BBC Radio show Tracks of My Years back in 2016 (Transcribed by Rock and Roll Garage) he revealed his influences, listing 10 of his favorite songs and explaining why he liked them so much.

Phil Collins was inducted into the Rock and Roll Hall of Fame as a member of Genesis in 2010 by Phish’s guitarist Trey Anastasio, who said that the group was “constantly strivingg for something more than obvious”.

“One of the Motown tracks that kind of typifies the period, you know. I mean, is well known that I love that era and particularly the Motown musicians, the feel, the sound. It’s like The Beatles, to me it doesn’t date, they sound contemporary,” Phil Collins said.

Founded as the Four Aims, lead singer Levi Stubbs, Abdul “Duke” Fakir, Renaldo “Obie” Benson and Lawrence Payton remained together for over four decades, performing from 1953 until 1997 without a change in personnel.

The American quartet from Detroit, Michigan helped to define the Motown sound of the 60s.

“A lot of people say to me, you know ‘who do you like today?’ and I can’t really sort of come up as a few people will get to but Two Door Cinema Club, my sons Nicholas and Matthew, they love this band and this song they took for the name of Nick’s band ‘What You Know’. It’s just got an interesting groove and interesting take on it. The singer is different and I’m going to like it because they are always playing i,” Phil Collins said.

Tom Petty and the Heartbreakers “Learning To Fly”

“I’ve loved Tom Petty’s stuff for a long, long time. He is very cynical, which I kind of understand, you know. It’s very English in some respects. I always loved his work with the Traveling Wilburys. But he has that 12 string thing. It’s just that reminds me a little bit of The Byrds, I think, from the 60s and I just find him very edgy. Keeps reinventing himself, big fan,” Phil Collins said.

One of the best selling Rock musicians of all time, Tom Petty died at the age of 66 back in 2017 one week after the end of the Heartbreakers’ 40th Anniversary Tour. He was also a member of the supergroup The Traveling Wilburys, with George Harrison, Jeff Lynne, Bob Dylan and Roy Orbinson.

The Ronettes “(The Best Part Of) Breakin’ Up”

“In my teenage years I went to Marquee a lot and we will get to it later, but one of my favorite bands used to play this and I went back to find the original. The Ronettes they were iconic, you know and Phil Spector, the ‘Wall Of Sound’, you know. It was just quite amazing the way he produced those records and actually on Youtube, you can Google backing tracks and you can hear him counting the track or giving notes.”

“I’ve checked that out when I was doing ‘Going Back’, because I did a run at a song on that album and I met Ronnie Spector actually, which is kind of a thrill to me, at the Rock and Roll Hall of Fame and she said ‘You’re Phil, not the other Phil’. So it’s kinda nice to know that she knew that I existed because she is like, iconic to me,” Phil Collins said.

The Beach Boys “Sail On Sailor”

“One forgets about The Beach Boys sometimes, the amount of great songs that Brian Wilson wrote, you know. But this album ‘Holland’, that this song comes from has got a lot of good songs on it and it was appeared when they were on hip, you know.”

“It was on one of their quieter eras. But ‘Sail on Sailor’ got such a fantastic groove that I wrote ‘Misunderstanding’, which Genesis did. I would have done on my solo album, but Genesis chose it. I wrote that because I love the groove of this. So it’s my nod to the Beach Boys but it’s just a great melody and great feel,” Phil Collins said.

Adele “Rumour Has It”

“I’ve met her in London a couple of years ago with a view to writing together, you know. She asked if I would consider writing with her and then I must admit that having been living under a rock I wasn’t too sure who Adele was, so I did and I mean, she had an incredible success. I don’t know where I’ve been and I probably heard her stuff without realizing it was her but you know, I did my homework and I just fell in love with this song. I think she is an awesome talent, frankly.”

“She knows what she is doing, in control of it and I think it’s so fresh but this song ‘Rumor’ has such a wonderful feel. That’s the thing that gets it for me,” Phil Collins said.

“I’ve always loved this song. This one again had that kind of Phil Spector type production and ‘Loneliness…’, you know, Scott Walker. I actually did a demo of this for ‘Going Back’ and it was quite fun to sort of try to emulate. Because obviously the ‘Going Back’ album was replicating these songs and this one was a little more difficult. But it’s just a wonderful song and it’s kind of upbeat and positive,” Phil Collins said.

The Walker Brothers were an American pop group of the 1960s and 1970s that included Scott Walker, John Walker and Gary Walker.

After moving to Britain in 1965, they had a number of top ten albums and singles there, including the No. 1 chart hits “Make It Easy on Yourself” and “The Sun Ain’t Gonna Shine (Anymore)”.

The Action “Never Ever”

“The Action, what can I say that I haven’t already said before. This is my favorite band, my favorite, absolute favorite. In the 60s I was going to the Marquee Club and I discovered them one night and went to see them every night they played. I’ve since got to know them, played with them where they did, they reformed and I played a gig with them at the 100 club, which was a dream come true.”

“You had to be on stage playing all the songs that I heard when I was a teenager. You know, Roger the drummer is a huge influence on me and we became great friends now. This is a great record, they were produced by George Martin, it’s a great song,” Phil Collins said.

Originally known as The Boys, The Action were an English band from the 60s that were part of the mod subculture and played Soul influenced music and pop.

The Animals “It’s My Life”

“In the 60s, I keep going back to the 60s. But I mean, it was a period when I learned my stuff, you know. I was a huge fan of the Yardbirds, The Who and The Animals. I bought their albums and played drums along to them. They had a series of singles:’We Gotta Get Out of This Place’, ‘It’s My Life’, ‘Don’t Let Me Be Misunderstood’, some great songs.”

“Eric Burdon, of course had a wonderful voice. So it’s kind of one of my favorite songs from them, certainly and they were a band to be reckoned at the time. The Animals are sometimes overlooked when people talk about that era (The 60s),” Phil Collins said.

One of the most influential bands of the 60s, The Animals were inducted into the Rock and Roll Hall of Fame in 1994 by Soul Asylum singer Dave Pirner, who said in his speech: “their sound was not only fresh but riveting”.

One Republic “Life In Color”

“Another one that my sons have turned me onto. They played in Geneva and I bought tickets as a surprise for Nicholas’ birthday, because he really, really loved the band. This particular song I thought it was so hooky, so we went to see them and they were great life.”

“We all met them before the show and they didn’t play ‘Life In Color’ (laughs). I said ‘Why you didn’t play ‘Life In Color’? It’s my favorite song!’ and they said ‘We kind of got off it’, which just goes to show that, you know. I mean how people might feel if they come to see my show, they don’t hear they favorite song. This is very hooky, is one of the best new bands that I’ve heard,” Phil Collins said.

Formed in Colorado Springs, Colorado back in 2002, One Republic achieved its first commercial success on Myspace as an unsigned act. Their first studio album “Dreaming Out Loud” was released in 2007.