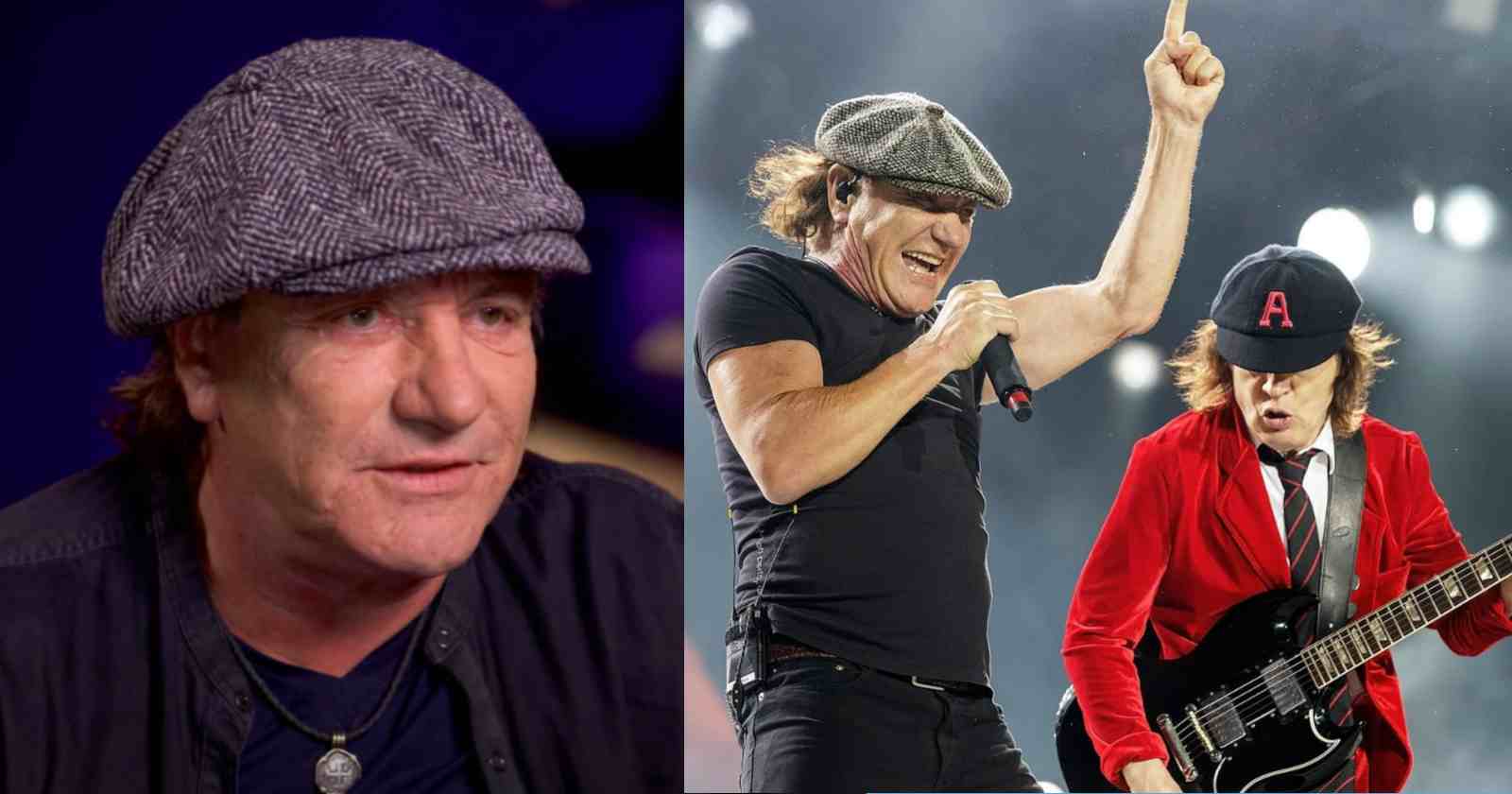 Born in Dunston, County Durham, England back in 1947, Brian Johnson first achieved fame as the vocalist of Geordie in the 70s. But it was in 1980 that he became a legendary Rock star when he replaced the late Bon Scott in AC/DC and recorded with the band “Back In Black”, that is not only their biggest album but one of the best-selling records of all time.

In an interview BBC Radio 2 on the show “Tracks Of My Years” in 2022 (Transcribed by Rock and Roll Garage) the musician listed 10 songs that are some of his favorites of all time and explained why he likes them so much.

“I was at home in the 60s, had been to the dentist, so I was off school and there was one channel on the TV, it was the BBC black and white, it was lunch time, news had finished and farming was gonna start. But there was a five minute interlude. These wonderful voice came and said: ‘And today, for the first time, this young man from America will sing his new Pop single called ‘Tutti Frutti’.”

“I just saw this guy with this stunning sweep back hair, beautiful jacket and he opened his mouth with ‘Whop bop b-luma b-lop bam bom’. That was it, I was just gone. I think that was one of the most important songs that I heard it. It was just magnificent,” Brian Johnson said.

Written by Little Richard and Dorothy Labostrie, “Tutti Frutti” was released by Richard as a single back in 1955 and changed the course of Rock and Roll music. The song was an inspiration for the evolution of the music genre and became an instant hit at the time.

“I was just starting in a small band then. We were all apprentices, we all wanted to be in bands. The Yarbirds, The Beatles, The Kinks, the whole wonderful explosion. We started a little one, we’ve tried to do songs but we kept running out of talent (laughs). We’ve heard this wonderful simple song ‘Born To Be Wild” and it was easy to play and everything. And all of the kids wanted to hear, it was quite a cult song. So we learned it and then on stage even started to make us changed our clothes.”

“We saw clips from these guys from the west coast and we wanted be like that. We just kept playing that song, it must have been for four or five years before someone said ‘I think we have enough of that’. But I think it was very important, because it was punchy, it was rocky, it had everything for a young musician and band. You (could also) dance to it rocking,” Brian Johnson said.

One of the songs that definied an era, “Born To Be Wild” was featured on Steppenwolf‘s self-titled debut album released in 1968 that also gained even more fame in Pop culture for being one of the songs of the band that appeared on the classic Dennis Hopper motorcycle movie “Easy Rider” (1969).

“I just said, I was an apprentice in Parsons and every lunch time the qualified guys would get the young apprentices and say: ‘Ok, get me two pies, one sausage sandwich’. You would get the exact money and the bosses would let you out so you could stand in a line. The coffee was called The Paddock and there would be a line and there would be a jukebox in. I remember once I was standing there and this song came on. It was ‘Paranoid’ Black Sabbath.”

“We were all (like) ‘Who’s that?’. It just took over and everybody started scratching in their pockets (for money). I mean, we kept put in it on. There was another one (that) as soon as I got back from work, I (talked) to the whole of the band and said ‘We’ve gotta learn this song’. I keep thinking, me and Ozzy, I think we are about the same age. He must have been 13 when he made that one (laughs). But I think it was a great thing because it started this whole thing.”

“I’m not a big fan of people calling: Hard Rock, Heavy Rock (and etc). It’s powerful Rock and Roll that people love to play and listen to. I think that ‘Paranoid’ really think it’s an important song that really made an impression on me,” Brian Johnson said.

The title-track of Black Sabbath’s second studio album “Paranoid” (1970), the song was the hit they needed to become even bigger after their influential debut record.  It reached number 4 on the United Kingdom singles chart and number 61 on the United States Billboard Hot 100.

“Had to be (‘Jumpin’ Jack Flash), can’t be any other. I mean, of course (there is) ‘Brown Sugar’. (But) there is something about certain songs. There is no reason why picked this song, except that riff was so infectious. I’ll never forget that, (the song) made me go out and buy a pair of maracas,” Brian Johnson said.

Released by The Rolling Stones back in 1968 as a single, “Jumpin’ Jack Flash” became one of their biggest hits. The song was written by Mick Jagger and Keith Richards, also being one of the last successful songs that the late guitarist Brian Jones recorded with the band.

“At the time, people were all doing those Rod Stewart and David Bowie voices, and they were getting all the gigs because they could copy the tunes. Bob Seger hadn’t really come out yet, but that was as close that I could get, which was what you wanted. Because if you could do covers for the clubs that’s what people wanted. They didn’t want to hear original songs.”

“It was hard and (I was thinking) ‘what the hell can I sing?’. Then even though it was ‘Black Dog’ the first one I heard, I remember the guy started rehearsing and I could sing up there. I couldn’t believe it and I went ‘I can do this! This is great’. Se we started doing it,” Brian Johnson said.

Featured on Led Zeppelin‘s fourth album “Led Zeppelin IV” (1972), “Rock and Roll” is one of their most famous tracks. The influential album also had other classics like “Black Dog”, “Stairway To Heaven” and “Going To California”.

“Elvis has to be the handsomest man on the planet. He invented (Rock and Roll), you (must) have him on there. (It’s like reading) the bible and not having Genesis (chapter). (If you don’t have him there) it’s a void. This man made it something just by his presence. Still love (his) black and white footage, how does he do that? I mean, his voice is pure, ‘Jailhouse Rock’ for me, the first time I heard this, his voice was almost like a guitar. You didn’t even know what he was talking about. But boy, it sounded good. It was just the hero for a long, long time,” Brian Johnson said.

Written by Jerry Leiber and Mike Stoller, “Jailhouse Rock” was first recorded and released by Elvis Presley for the film of the same name in 1957. The track became one of the singer’s greatest hits and was a huge influence for kids who some years later would become also praised rock stars, like The Beatles.

“‘Rocky Mountain Way’ is one of my favorite of all time songs. Joe Walsh is one of my best, best friends. He is the funniest man that I think I ever met on my life. We had a wonderful time together at Wembley at the Taylor Hawkins’ tribute. I was at the side of the stage and he came out and said ‘Brian Johnson, now I know the night’s going to be alright!’ He is just lovely, we keep in touch a lot now. I should not say this but I’m gonna say it anyway.”

“When The Eagles come out, brilliant, we all love The Eagles, of course we do. (…) But he jokes ‘I’ve got the greatest backing band in the world’. (…) This song, if you just listen to the lyrics, it is just so pure, so beautiful and honest. The solo in the middle of it was groundbreaking. I have never heard something like it. Joe’s just trying for the first time and you can play this song (after) 40 years,” Brian Johnson said.

“Rocky Mountain Way” was first released on Joe Walsh’s second studio album “The Smoker You Drink, the Player you Get” (1973). It’s one of the biggest hits of his solo career and he even plays the track at Eagles‘ concerts most of the times.

“(About) 78, 79, Rock was getting a little softy and everything was just way too comfortable. Then this thing comes out. It feels like Blues, Jazz, Rock and (everyone felt) ‘what is is this song?’ Mark (Knopfler) is from Newcastle (Area Johnson is connected to). You know, this is my real world (Newcastle), this is what happened to me and I’m going: ‘That’s fantastic’,” Brian Johnson said.

One of the songs that defines Dire Straits, “Sultans Of Swing” was the single of their self-titled debut album. Written by guitarist and vocalist Mark Knopfler, the song remains as a Classic Rock radio staple and still is a huge influence for many musicians worldwide.

“Roy Orbinson is an enigma to me. I mean, he is a man who sings and doesn’t move his mouth. That song, first of all, it’s just absolutely beautiful. It builds and it builds and it builds until you can’t go any higher and he does. That when (you go) ‘That’s just not fair’ (laughs). I gotta tell you, it was very difficult to pick a song (by) Roy Orbinson, (there) are so many fabulous ones. But ‘In Dreams’ it was just so pure.”

“Over the years I’ve met some people and some of the lads that were in the Wilburys with him and he was the (reference) of that genre. When you hear the last song (he did) with the Wilburys, the last single, you can see the smile on Harrison‘s face. But he just brought so much joy and he was wonderful,” Brian Johnson said.

“In Dreams” was first released in 1963 by Roy Orbinson as a single for the album of the same name. At the time it peaked at number 7 on the Billboard Hot 100 and charted in the United Kingdom for five months when Orbinson was touring there sharing the bill with The Beatles.

“It speaks for itself, that voice. When I went to audition, was (actually) a trial, was not (really) an audition. (It was) ‘come along and have a sing’ with the boys from AC/DC. (My band at the time) in Newcastle was doing ‘Nutbush City Limits’ and it was one of the crowd’s favorites. So powerful, you need everything, you can’t half-sing ‘Nutbush City Limits’ and the boys started joining in, the drums, just this little run-through thing.”

“It was magic, it was something. That’s why it’s important to me, it changed my life that day in 1980. That’s why became really personal for me,” Brian Johnson said.

Released as a single by Ike & Tina Turner in 1973, “Nutbush City Limits” is one of the biggest hits of their careers. Written by Tina, the song is a tribute to her hometown of Nutbush in Haywood County, Tennessee, United States.