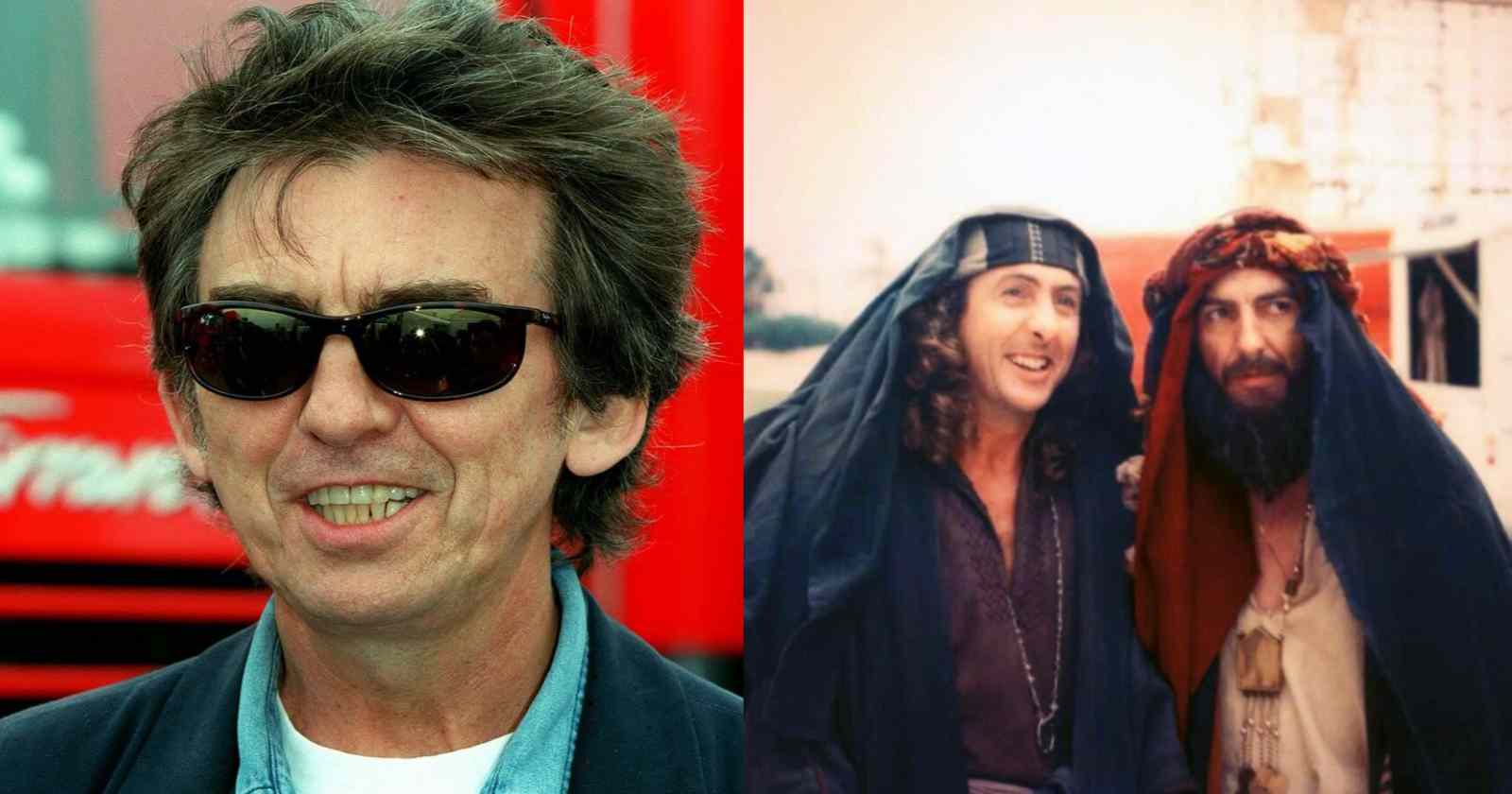 After The Beatles end in 1970, George Harrison started a successful music solo career but also worked in other areas like movies. Back in 1973 famous actor Peter Sellers introduced George Harrison to Denis O’Brien, with whom he created the film production and distribution company HandMade Films.

He was the executive producer of 23 movies until the company ended in 1991 after many box office bombs, being sold to Paragon Entertainment from Canada. After that Harrison sued O’Brien for $25 million for fraud and negligence, resulting in an $11.6 million judgment in 1996.

In an interview at the premiere of “Pow Wow Highway” in 1989, Harrison explained how the company chose the movies that would be produced: “Well, you go through a load of scripts that we have just like anybody else does really. Then we decide which ones are the most suitable for our company”.

To fans know a little bit more about the great movies of the company Rock and Roll Garage selected the 10 best movies that were produced by George Harrison.

Bellman and True is a 1987 film based on the novel of the same name by Desmond Lowden. It stars Bernard Hill, Derek Newark and Richard Hope. The title comes from an old Cumberland song titled “D’ye Ken John Peel”. So the title uses a pun in the term Bellman which in the film’s case refers to a criminal who specialises in disabling intruder alarm systems.

The movie shows Hiller, that is a computer expert, was bribed by group of bank robbers to obtain details of the security system at a newly-built bank. Having obtained the information, he thought he’d seen the last of the robbers. But now they’ve traced him and his son to London. They hold the son hostage and force Hiller to decode the information about the alarm. Also to take part in the robbery.

The film is a farce about a mentally unstable advertising executive, Denis Dimbleby Bagley, who suffers a nervous breakdown while making an advert for pimple cream. Ward plays his long-suffering but sympathetic wife. In addition, Richard Wilson plays John Bristol, Bagley’s boss.

8 – Little Malcolm and His Struggle Against the Eunuchs (1974)

Stuart Cooper directed the 1974 British comedy drama that entered into the 24th Berlin International Film Festival where it won the Silver Bear. The film is based on the stage play Little Malcolm and His Struggle Against the Eunuchs by David Halliwell.

The movie shows an art student is thrown out of college. Depressed, he comes up with the Party of Dynamic Erection, a near-fascist “party” that promotes male sexual dominance. Which attracts a couple of other unsavory confused characters.

The movie tells the story of a young boy accidentally joins a band of time travelling dwarves, as they jump from era to era looking for treasure to steal.

The Lonely Passion of Judith Hearne is a 1987 drama film starring Maggie Smith and Bob Hoskins. The music score was by Georges Delerue and the cinematography by Peter Hannan.

The story shows Judith Hearne, who is a lonely, middle-aged, Irish spinster from a good family in distressed circumstances who gives piano lessons independently but is losing pupils. After moving into a rooming house in Belfast, she meets and becomes attracted to the landlady’s widowed brother, the charming James Madden, who has returned from America.

Then Madden notices her inherited jewellery and believes wrongly that she is reasonably well-off and might invest in his business idea.

Jonathan Wacks directed Powwow Highway, a 1989 comedy-drama road movie based on David Seals novel of the same name. It features A Martinez, Gary Farmer, Joanelle Romero and Amanda Wyss. Besides Wes Studi and Graham Greene, who were relatively unknown actors at the time, have small supporting roles.

The movie depicts the struggles of reservation-dwelling Native Americans in the North Central United States. The main character is an introspective and lovable person in a process of seeking pride and identity through traditional and mystical means of gathering power. His high school friend, who is a Vietnam War Veteran, is exerting power as a highly principled social activist, using a modern rational materialist adversarial model of progress.

Mona Lisa is a 1986 British neo-noir crime drama film with Bob Hoskins and Michael Cane about an ex-convict who becomes entangled in the dangerous life of a high-class call girl. Neil Jordan directed the film and co-wrote the scrip with David Leland.

Bruce Robinson wrote and directed Withnail. Loosely based on Robinson’s life in London in the late 1960s, the plot follows two unemployed actors, Withnail and “I” who share a flat in Camden Town in 1969.

Needing a holiday, they obtain the key to a country cottage in the Lake District belonging to Withnail’s eccentric uncle Monty and drive there. The weekend holiday proves less recuperative than they expected.

The Long Good Friday is a 1980 British gangster film starring Bob Hoskins and Helen Mirren. The storyline weaves together events and concerns of the late 1970s, including mid-level political and police corruption. Also IRA fund-raising, displacement of traditional British industry by property development, UK membership of the EEC, and the free-market economy.

Talking in an interview with Film Comment in 1988, George Harrison praised Bob Hoskins: “The Long Good Friday was a pickup that had been shelved by the owners. It was the same company, by the way, that had turned down Life of Brian.”

“They wanted to cut it and put it on television. While we put it out in the form that the producers, actors, and director had visualized. It’s a great little British gangster movie. Critics said they hadn’t seen a performance as good since Edward G. Robinson. And it was true. So Bob Hoskins was fabulous.”

Monty Python’s Life of Brian, also known as Life of Brian, is a 1979 British comedy film starring and written by the comedy group Monty Python. Also directed by Jones, the film tells the story of Brian Cohen, a young Jewish-Roman man who is born on the same day as—and next door to—Jesus. Subsequently mistaken for the Messiah.

The film was a box office success, the fourth-highest-grossing film in the United Kingdom in 1979. Also the highest grossing of any British film in the United States that year. The film remained popular and called  “greatest comedy film of all time” by several magazines and television networks.

In an interview with Film Comment back in 1988, George Harrison (Who made a cameo in the movie) talked about the production: “An English company had backed out of the Monty Python film Life of Brian in preproduction. So the guys, friends of mine, asked me whether I could think of a way to help them get the film made. I asked Denis O’Brien, who had been my business manager since the end of ’73.”

“After thinking about it for a week, he came back and suggested that we produce it. I let out a laugh because one of my favorite films is The Producers. And here we were about to become Bialystock and Bloom.”

“Neither of us had any previous thought of going into the movie business. Though Denis had a taste of it managing Peter Sellers and negotiating some of the later Pink Panthers films. So it was a bit risky, I guess. Totally stepping out of line for me. But as a big fan of Monty Python my main motive was to see the film get made.”