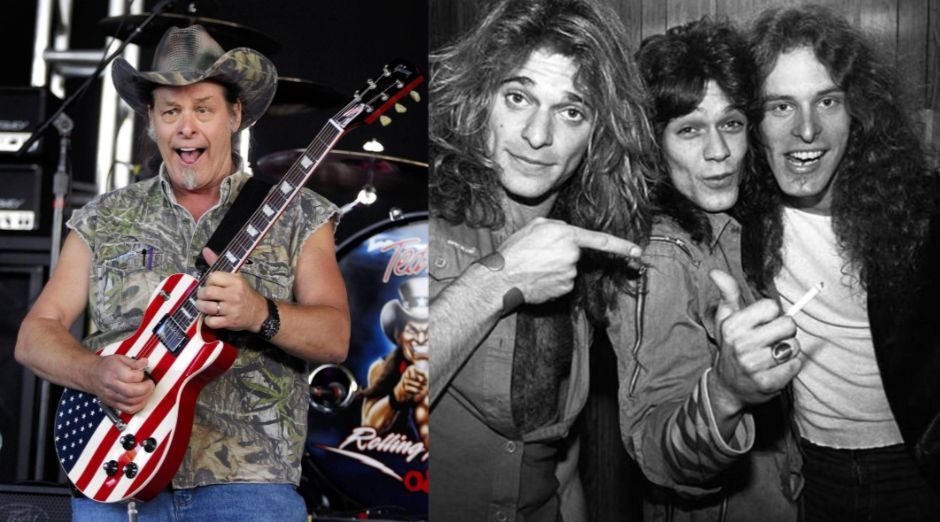 In an interview on the Eddie Trunk Podcast, Ted Nugent talked about Eddie Van Halen‘s guitar playing. And he first reaction when he heard Van Halen for the first time.

Ted Nugent was asked: “There was a time when you and Eddie Van Halen traded guitars, and he tried to play the Byrdland?”

“And they’re out there doing a soundcheck – we want them to have a good checking of their sound, and I’m listening to the guys and, of course, they’re just world-class musicians, Alex [Van Halen, drums] and Michael [Anthony, bass] and Eddie and David [Lee Roth, vocals], and they’re out there with this brand new thing called Van Halen, and it was a monster.

“And I’m listening to this screamy high end – he [Eddie] had a little bit of phaser going on, he had some kind of electronic warfare going through his amplifier that he completely tore apart and rebuilt – he’s just an electronic maniac.

“I listen, I’m going, ‘God damn, what kind of an instrument and an amp does that son of a bitch use?! I went out to watch those guys. And they went to talk about the tour, the music, the inspirations. And the tone, he goes, ‘How did you get that Byrdland to sound like that?’

“And I saw my Byrdland right there. And I said, ‘Well, here, plug this son of a bitch in, we’ll keep it in my Fender amps.’ And of course, my Byrdland feeds into that low volume. The Byrdland wants to eat your phase.

“So he repositioned himself, he started pulling these mystical licks, and it sounded just like him, but out of my rig.

“And I grabbed his Strat – his mutilated, bastardized Strat – and I started playing ‘Dog Eat Dog’ or ‘Cat Scratch [Fever]’ or something, and it sounded just like me.

“If music is anything, it’s not only the universal language. Not just the universal communication for people anywhere in the world at any time. But it’s also a personal execution of the musician’s sonic vision.

“And when you practice your balls off, when you dedicate yourself to be the very best you can be, which describes every musician that you and I love…

“It’s you, not even the Fenders or the Gibsons. It’s you coming through your musical vision and attack of the instrument. You could have an amp and a guitar, don’t change any of the settings and put 10 of your favorite guitar players on that set and it will sound just like each individual.

“So it is a mystical Samurai adventure of self-expression, and going right back to my opening statement with you many years ago, ‘We love the fucking music.’ If you love it with all your heart and soul, you’re gonna put all your heart and soul into making your music, and that’s why it’s so contagious and universal.”

“I play PRS guitars, I got some killer Les Pauls, I play Fender Strats… I’m working hard, playing hard, I think that was on the ‘Cat Scratch [Fever]’ record [in 1977]…

“So I’ve always got an arsenal of just killer, killer world-class American crafts guitars at my side at all times. I cut wood this morning. I cut down some trees around my fence. And I cut logs and I split the logs, and I whack and wail like Jeremiah Johnson – like I’m a rancher or something.

“Which, by the way, I am a rancher, and I’m using my hands, and I’m beating myself up. I took the dogs back in the kennels, get them some biscuits, of course, and I come in the house, there are six Byrdlands, including, are you ready, Eddie…?

“A brand new, perfect, 1965 Gibson Byrdland. As if it just came off of the assembly line that I got from a great guy in North Dakota just two weeks ago. And when I picked that son of a bitch up – because I’ve been earthly chores, mechanical, chainsaws, axes, hatchets and crowbars, think of it as doing manual labor.

“I pick up that guitar and I suppose you could metaphorically speak that the mechanical. Earthly woodworking, hammering, chainsawing, wood-splitting work, all of a sudden, it has a sound to it.

“I’m still just dangerously passionate about it. And the Gibson Byrdland, with that spruce voice, it’s a hand-carved Archtop jazz guitar that, you just play the opening of ‘Stranglehold’ or any of my licks, there’s just no guitar that sounds like that, and it makes you play that way.

“It’s in the balls, it’s in the heart, it’s in the belly, it’s in the spirit. But ultimately, it’s it in the hands. And if your hands can deliver what’s going through your mind and your spirit or your balls, you got some killer shit happening right there. So that’s still the procedure all these years later, and I’m lucky.”

Any movement or any dialog about Damn Yankees?

“There is cosmic electricity going wild to the airwaves of planet Earth where Michael [Cartellone, drums] and Jack [Blades, bass] and Tommy Shaw [guitar/vocals] and I, we crave the opportunity to put a schedule together where we could all land in the same room together with amps and guitars and drums.

“You know it’s true because Tommy is just so soulful. Tommy is music, Jack is music, Michael is music.

“If we can possibly wrestle the calendar so we can get back together. I know all four of us would just love to do it. We express how much we love to do it every time we get together. So I would never say no, I would say, ‘You’re damn right.’

“At some point, we got to get in the room, even to make just one killer song. But what a great band, great music, great friends, what great blood brothers. And work ethic American rock ‘n’ roll legends those guys are.

“Yet I don’t have any schedule in front of me that we can narrow it down yet. But I want to do it more than.

“You want to see us on tour, so we’re going to try to do that ASAP. I don’t know when. But as soon as we can get in a single room together. I will call you, Eddie Trunk, first.”