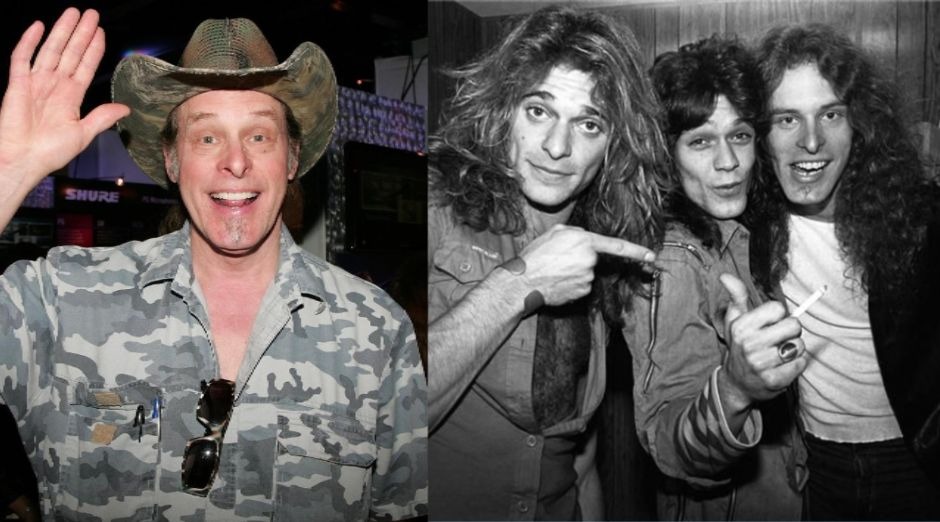 Guitarist Ted Nugent talked about guitar skills in an interview on Behing The Vinyl podcast and revealed which guitarist could do things Eddie Van Halen couldn’t. He also talked about his composition process.

About his songwriting, Ted said:

“I don’t write songs, I just unleash my inner soul. Whether it’s the silly ‘Wango Tango’ outrage, which really isn’t quite actually silly, or the sincerity of the ‘Fred Bear.’ Or ‘The Music Made Me Do It,’ or the outrage of the ‘Bigfundirtygroovenoize.’ Or the historical R’n’B of ‘I Love Ya Too Much Baby,’ or ‘You Make Me Feel Right at Home’…”

“I mean, think of the uncharted territory that I’ve never, and I don’t need to get credit for because I give myself credit for it. And real music lovers every day on Facebook identify those musical escapades that I’ve provided for people. But because the industry doesn’t like me because I’m against their drugs. Which is really what it boils down to. Or because I ‘murder innocent animals,’ or I believe in guns, you know. All the perfect things; they’re angry because I like perfect shit.

“When I created Stranglehold, it was on the bass guitar. It’s like tambourines and a hi-hat, and the bass drum, and grinding Bo Diddley. So when we recorded it, and again, Rob [Grange] is a world-class, monster bass player. Just listen to the stuff he did on those albums.

“It’s a beautiful thing, but it’s because of my grace notes. And I hit the strings with the meat of my hand so that some go ‘bleh’ and some go ‘crrr.’ Nobody else can play that shit!”

“I play bass on a whole bunch of those songs because it’s my baby, and I’d like to dress my baby the way I want to dress my baby. And when I’m done dressing my baby, it’s really good utilitarian, good-looking, effective clothing. Whether anybody likes it or not, and anybody who likes music, they do like it a lot.”

“Yeah, that’s a phenomenal old classic Fender Bass VI. It’s a Fender six-stringed bass from 1962, I have a ’62 and a ’64 that I got from a great man named Tony Dukes, and you should pursue who Tony Dukes was because he got [ZZ Top guitarist] Billy Gibbons’ first ’59 Les Paul, and he got me my first ’58, ’59 Les Paul.

“Tony Dukes, God rest his soul, he got into the drugs and the alcohol, and he died too young, just like Steve Farmer, you know Steve Farmer, from the Amboy Dukes, died [on April 7 this year at the age of 71].

“And there was a time when he was such a brilliant, nice man, but the more stoned and high you get, you lose that humanity. People who get pissed off when I say that, that’s tough shit, but the reason they get pissed off is because they’ve lost their humanity.

“The brain will never work as good after getting high as it did before you got high, and if anybody wants to argue with that, I’ll see if I can get [Aerosmith guitarist] Joe Perry to form a sentence for you.

“And I love Joe, and I don’t mean to be mean-spirited, but nobody brings a quality of life to their family or friends when they’re high, period. Point being that I’ve always focused on the soulfulness of the music.

“When I play the bass guitar on a song. It’s because as awesome the best players in the world have been at my side from. Certainly, Rob Grange and certainly Marco Mendoza and Michael Lutz, and Jack Blades, I mean, they’re all phenomenal, more pure-musical than I am.

“But I think that’s my gold card – I’m effectively musical, but I’m also reasonably dissonant, you know what I mean? You can play perfectly, like, watch the last days of [Huimble Pie’s] Steve Marriott, it’s just a three-piece and he was playing that Gibson through a Marshall amp.

Then revealed that Steve Marriott could do things Van Halen couldn’t:

“And can Eddie Van Halen do what Steve Marriott can do? Yes, but guess what? Steve Marriott did stuff that Eddie can’t do. I’m not knocking anybody or trying to compare, even though I just did, but there’s an edge-clash thing to not trying to be perfectly musical.”