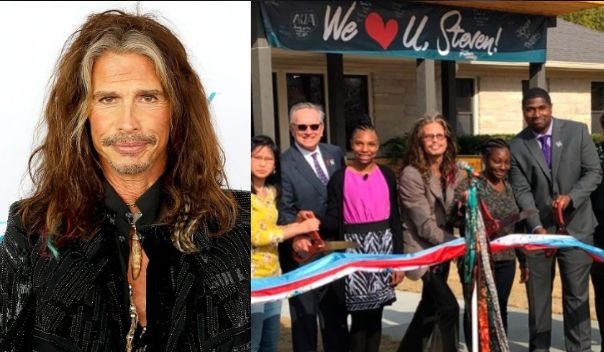 Aerosmith frontman, Steven Tyler inaugurated the Janie’s House on Memphis, according to the Tennessee WJHL channel. The house aims to help women victims of sexual or psychological abuse.

This was the second Janie’s House opened in the United States, the first opened in Atlanta in 2017, and a third is due to open in Las Vegas later this year. The musician’s support house is named after the Aerosmith hit “Janie’s Got a Gun,” a track from the 1989 album Pump, which portrays a girl who is abused by her own father.

And speaking of success, next weekend in Los Angeles, Steven Tyler will promote his gala party for Grammy screening for the second consecutive year. He will host a number of celebrities who are willing to help his organization, who will enjoy an intimate performance from Aerosmith. And, of course, follow the live broadcast of the 61st Grammy Awards ceremony.

Among the many celebrities who performed as co-chairs in support of this year’s party are musicians such as Lenny Kravitz, Mick Fleetwood and Alice Cooper. From the movie world, actresses Scarlett Johansson, Kate Hudson, Sharon Stone and Nina Dobrev, plus producer Michael Rapino.

Gala party proceeds will go to Janie’s Fund. Last year, the event managed to raise almost two and a half million dollars for the organization. “We will not stop until we reach our goal of giving these girls domestic security and a taste for life,” Tyler said in a statement. “We were completely overwhelmed with the support of our friends and family from the beginning. It’s only because of this that we have been able to create a way that is to help these girls find their voices and have the chance to live with respect they deserve.”