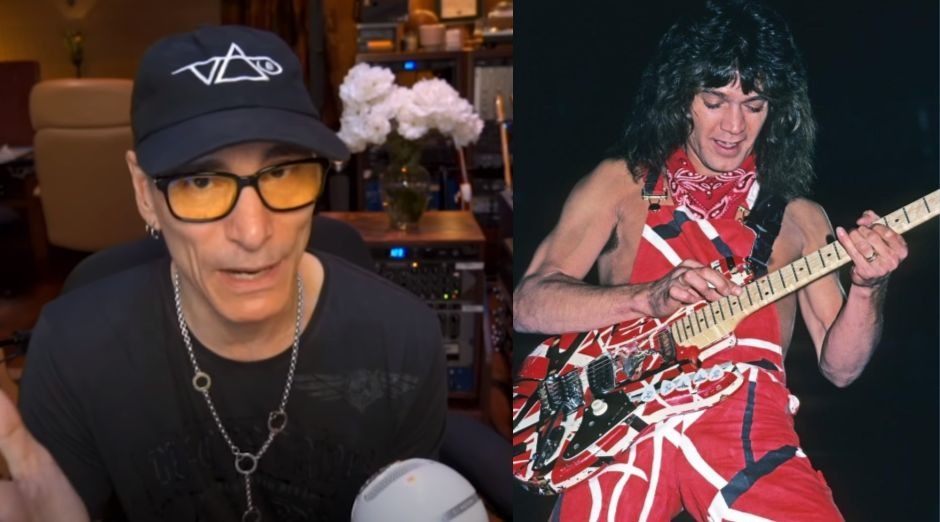 Virtuoso guitarist Steve Vai talked about the first time he saw Eddie Van Halen play and use the tapping technique on his Facebook live broadcast “Alien Guitar Secrets”. The musician also explained how his mind works while playing the guitar.

About the tapping technique and the first time he saw Eddie Van Halen using it, Steve Vai said:

“Tapping, I was probably 14 or 15, and I was listening to Frank Zappa, [1975’s] ‘Inca Roads,’ his solo, one of the greatest guitar solos for me that I’ve ever heard, and he was doing this thing with his pick like a bagpipe sound, and I thought, ‘What is that?’

“And I figured he was tapping. So I started to experiment with that, I kind of liked what it did. And I was doing things like *taps*. But then I think maybe I was 18 or 17 when Van Halen came out. Once Edward hit the scene, I mean, that was tapping, right?

“So the tapping I was doing when I was in college and stuff before I heard Edward was, it was more limited; it didn’t have a great tone. But once we all heard Edward tapping, we’re like, ‘Oh, OK, there it is. But I didn’t want to sound like that, I couldn’t, and also it just felt like, ‘Why?’

The first time he used “tapping” was on Alcatrazz:

“The first time I started to develop my tapping technique was when I was in Alcatrazz [1984-1986]. That’s when I really started developing it. Because there was this one riff. I can’t remember what it was, but it was a part of the song called ‘Too Young to Die, Too Drunk to Live’ something like that. And it was a Yngwie [Malmsteen] riff, and it was all these arpeggios.

“And it’s not my style, you know, to play those kinds of arpeggios the way he does it, that’s a whole style that he’s got, so I developed this way of doing it by using these two fingers [middle and ring].

“So when I was thinking about hammering and tapping, you have this [index finger], a lot of people do that, I just don’t like that, for some reason it never felt right using my index finger there, and then you got it fooled with the pick.

“So I just thought, ‘I can hold the pick and actually do tapping with these two fingers.'”

Steve Vai said about how his mind works while playing guitar:

“What I like to do – and what I would recommend. When I say, ‘I don’t think,’ well yeah, of course, I hear a chord, and I recognize it. And sometimes my mind will say, ‘Oh, that’s a C-sharp Minor 11 chord.’ But I don’t need to tell myself that, it’s just like a knowing.

“I may not know it’s a C-sharp. But I hear the tonality of it and know if I find one note that works. The whole neck is opened up. And the reason why that neck is opened up for me and I don’t have to think about scales or chords or anything is because I did the pre-work. It was always kind of there.

“On one level, the theory is there. But it’s not called upon so consciously unless of course I’m playing with some jazz cats. These days I don’t, I can’t keep up. [Laughs]”